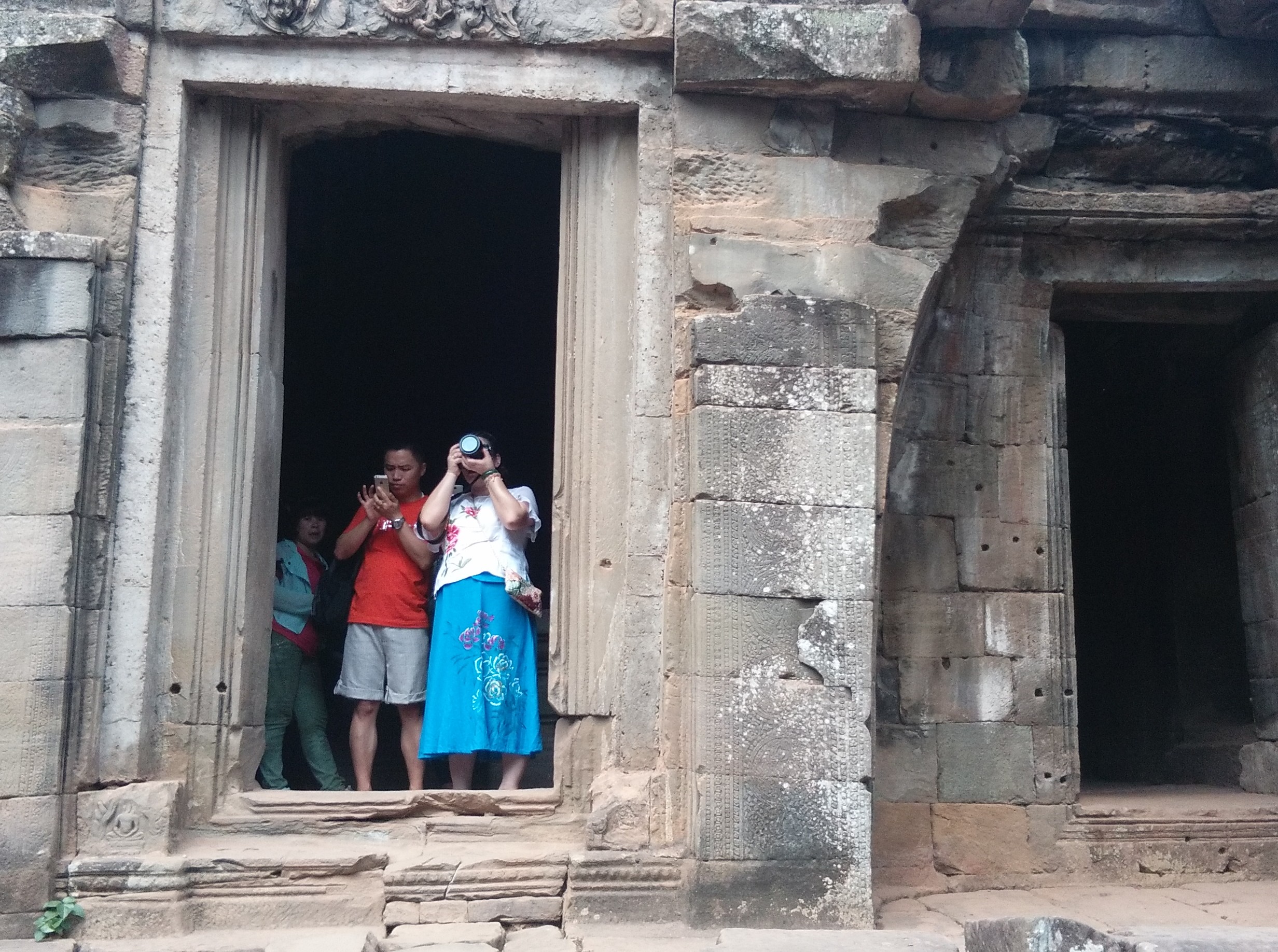 I got an email yesterday: „I read about your changed plans, so I don’t know when you will read this…“. Apparently not everybody got our April fools‘ joke. We are still in South East Asia and will not fly to North Korea to work for a Turkmen human rights organization. It was a joke.

That said, let’s go back to what’s true and really happens:

My fever is gone and I feel alright, so we leave 4000 islands, take a boat to the main land and cycle to the Lao/Cambodian border. The border crossing is famous – for special fees. It is the only border crossing between Laos and Cambodia and therefore everybody crosses here. It is crowded. So after more than a year of traveling, this border crossing in Laos is the first that asks for two dollars per person to give you an exit stamp. It is clearly a scam, because last time we left Laos we didn’t have to pay an exit fee. In the 30 minutes we spend at the border crossing around 50-100 people are crossing this border. Imagine the amount of money they earn each day. Smooth criminals.

A few hundred meters after the border crossing the road starts to fall apart. After a few kilometers we stop at a little stall where they sell sugar cane juice. Cambodia is equally cheap as Laos. We didn’t have the opportunity to get some Cambodian Riel, but you can pay in dollars everywhere in Cambodia, also at this small sugar cane stall.

The goal for today is Stung Treng, the next major city in Cambodia. It is around 60 km away. There are no villages on the way, only some small settlements and sugar cane stalls.

Cambodia reminds me on the first Super Mario computer game. It is flat, almost nothing around you. Some insects and lizards you have to dodge. The trees are burnt down, the landscape looks dead. And while there are green tubes in Super Mario Land, there are orange boxes in Super Cambodia Land once in a while.

As a side note: The box doesn’t show off with its strong left biceps. That’s just a cock sitting behind the box.

When you open an orange box, there is a good chance you find beer, coke and red bull cans floating in a mixture of water and ice cubes. But there is also a chance they are empty or worse, a slaughtered pig is inside. So beware when opening orange boxes. You never know what’s inside.

It is still very hot and we cycle through this bizarre, dead landscape until we finally reach Stung Treng. The market is so full of people, that we both feel back-flashed into India. But it’s only the market. We find a small guesthouse and little stalls that offer Durian shakes – delicious.

The next day we turn west and cycle towards Siem Reap a few hundred kilometers away. The route is quiet, hot, flat and continues through dead landscape. Not much traffic, though. Some cars and motorcycles are passing. But also often whole families sitting on so called „iron bulls“ or „iron elephants“

Between the villages people are living in tents or very simple huts, surrounded by burnt down trees. On the land between they grow crop. There is of course no shop around, but more or less every hut has an orange box, so we actually get a coke easily.

But since the people living there cannot solely live from coke, beer and red bull, there are moving shops often pulled by a motorcycle that runs on the road in search for customers.

They usually play a music that could easily be from a 90s computer game. It is a strange image, because this is in the middle of nowhere. Once I stop a running shop that sells sugar cane juice. He stops just for us. But within a few minutes people living in tents a few hundred meters away start to walk to the road, carrying their little children. After all the sugar cane juice is not only delicious, but very healthy. And it is freshly pressed in front of you.

Every evening we reach a tiny village with a guest house. Often with poor standards, but we want a shower so badly, even though this can sometimes be only a bucket full of dirty water. We are so dirty and sweated the whole day. The prices are high for the standards, but at least the money directly goes to the poorest people.

The last night before we reach Siem Reap we spend in Svay Leu. We start early the next morning. At around 7 am we stop because there is a little bridge on the left side of the road. It looks very simple. I take a closer look and realize, that it is made of big pieces of precisely cut rock. I tell Cora we should explore what’s on the other side. We find ruins similar to Angkor Wat, but completely destroyed by trees and probably also by tomb raiders. 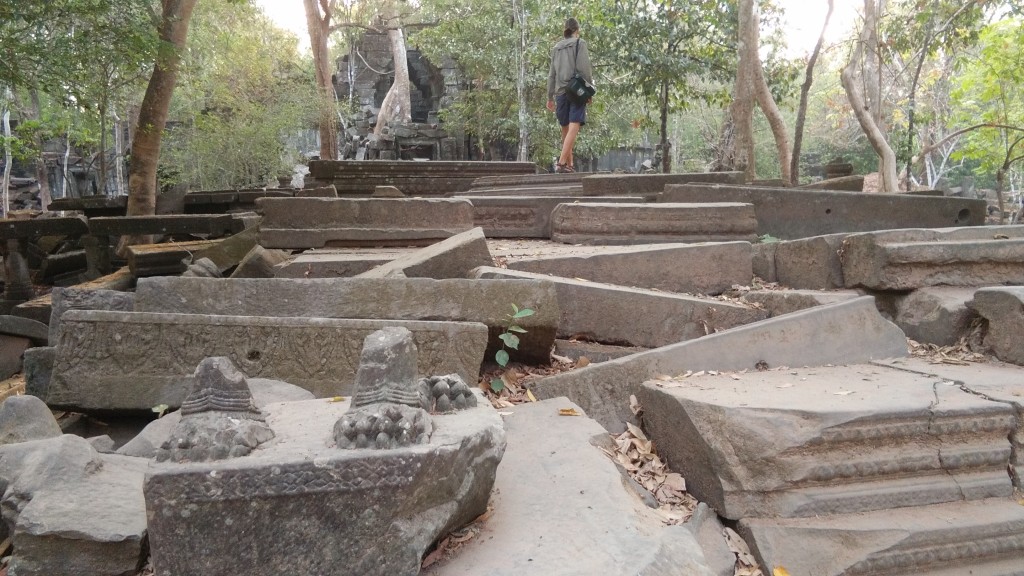 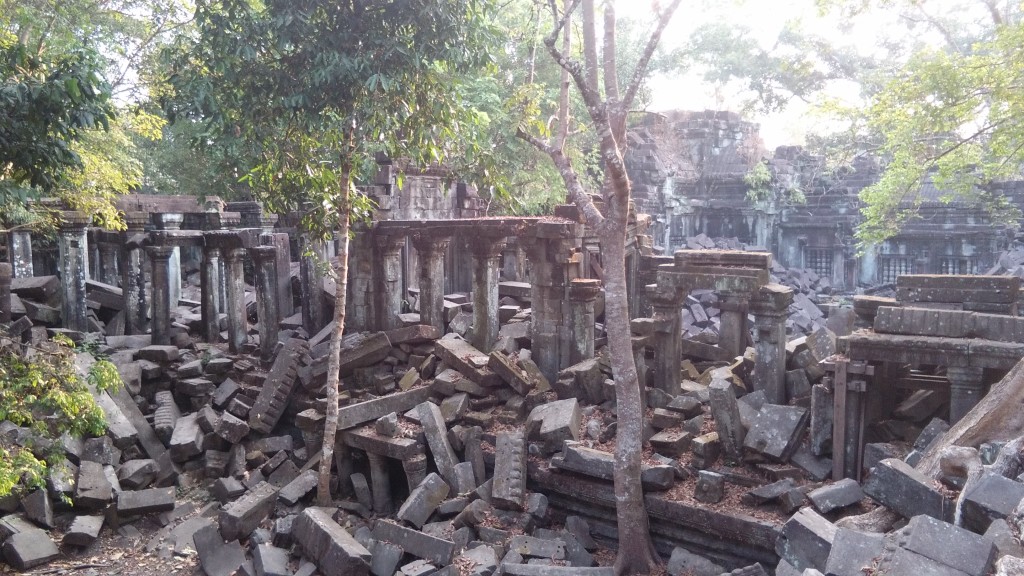 We continue and leave the main road to take a shortcut on a small track to Siem Reap. The track gets sandy and we have to push the bicycles a lot. But again we find very remote settlements and truly feel like cycling through South East Asia. The huts, the palm trees, the plants, the animals, but also of course the intense heat. Next to many huts there is a washing place with a well. A sign tells who sponsored this well. That’s why I know that washing our face and feet was sponsored by „Family Schleiger“. Thanks.

Anyway, in spite of the heat and being exhausted, we enjoy these remote places. You cannot find this along the main road. Once we stop, because I want to have a look if we are still going in the right direction. The sand is also deep again, so we step off the bicycles. A few men are laying on a porch below a tent, as so many do here, because you can’t really work in the heat unless you are a traveler. One is approaching us.

He moves his hands like he wants to paint a triangle in the air. First I think he wants to invite us into the tent. But he points in the other direction. I assume there is maybe a temple, so we go there. In fact we find another huge ruin belonging to the Angkor Wat complex. Impressive and very much off the beaten track.

When the sand track finally ends and we stand on paved road again, some tourists on enduro-motorcycles enter the track from the other direction. We’ve reached the event-horizon of the adventure-tourism around Angkor Wat. Like a black hole, Siem Reap sucks us into its own space and time.

We have a burger in the „Jungle Burger“ restaurant. There is also free wifi, so we look for a nice guesthouse on booking.com and tripadvisor. Arriving at the guesthouse they tell us there are no free rooms. We ask at „The Cashew Nut“ guesthouse on the other side of the street. The room without AC is 10 dollars. It is clean and that’s all perfect, but it is in the third floor and you get picky once you got used to what you can get for 10 dollars in South East Asia. The owner is British. He adds that coffee and tea are also free. They also sell cold drinks – beer, coke, water – in the guesthouse. So we are standing there discussing. The British guy is rather quiet and very polite and professional. He says, there is a lot of room also for the bicycles and a yard to relax, but then remains quiet and lets us discuss. Actually the discussion is not about the price. It’s usually about whether it is worthwhile to spend energy outside in the heat, just to get a slightly better offer. The room was great, but I don’t want to carry all our stuff to the third floor. That’s also a waste of energy. The British guy apparently kept a secret, though.

British guy: „We also have a swimming pool“
Me: „Shut up and take my money!“

No, I didn’t say that. But we check in and stay in the swimming pool until our skin starts to dissolve. Great!

The next day we take a tuktuk to Angkor Wat. Angkor Wat, that’s where Angelina Jolie played Lara Croft in Tomb Raider – and later adopted two Cambodian children. After the movie everybody knew about Angkor Wat. (Actually what you see in the movie is Ta Prohm, but usually nobody cares, everybody calls everything Angkor Wat). Now we have also been there. The day in pictures: 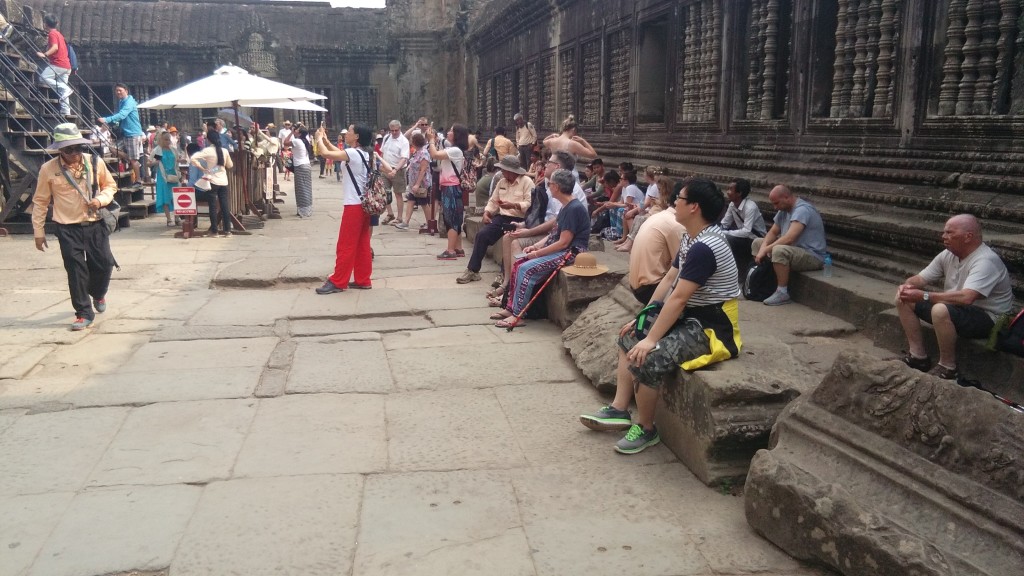 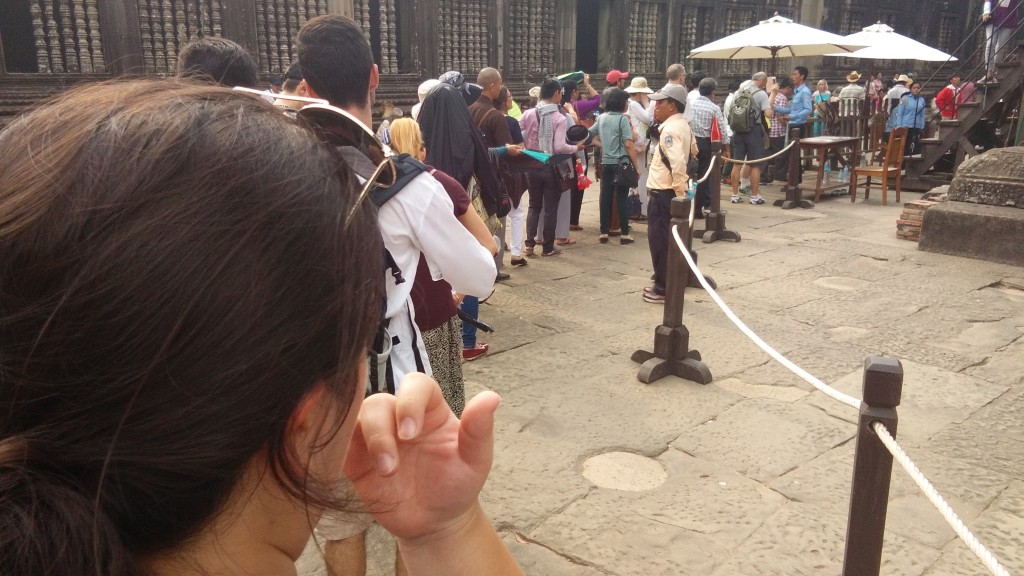 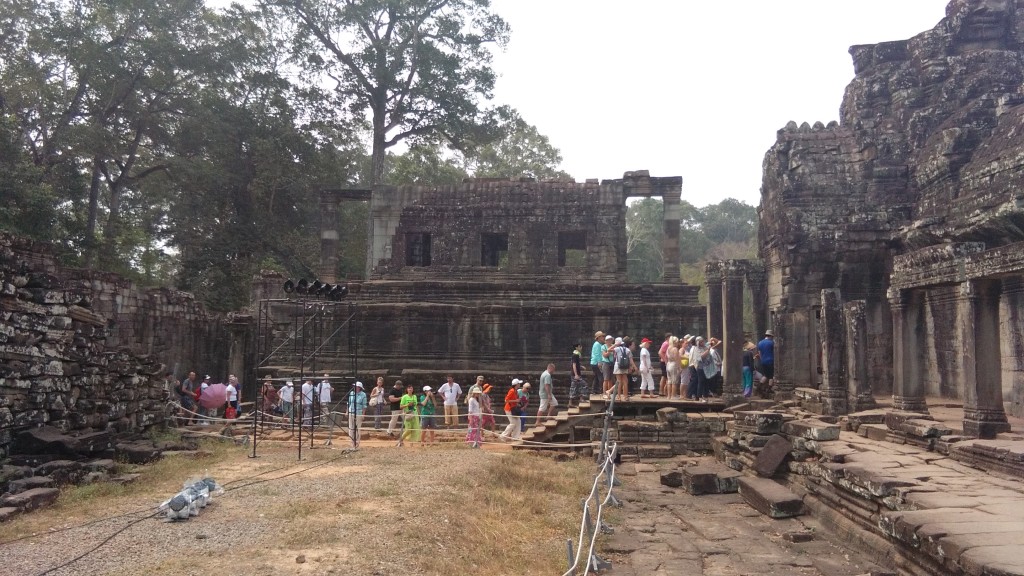 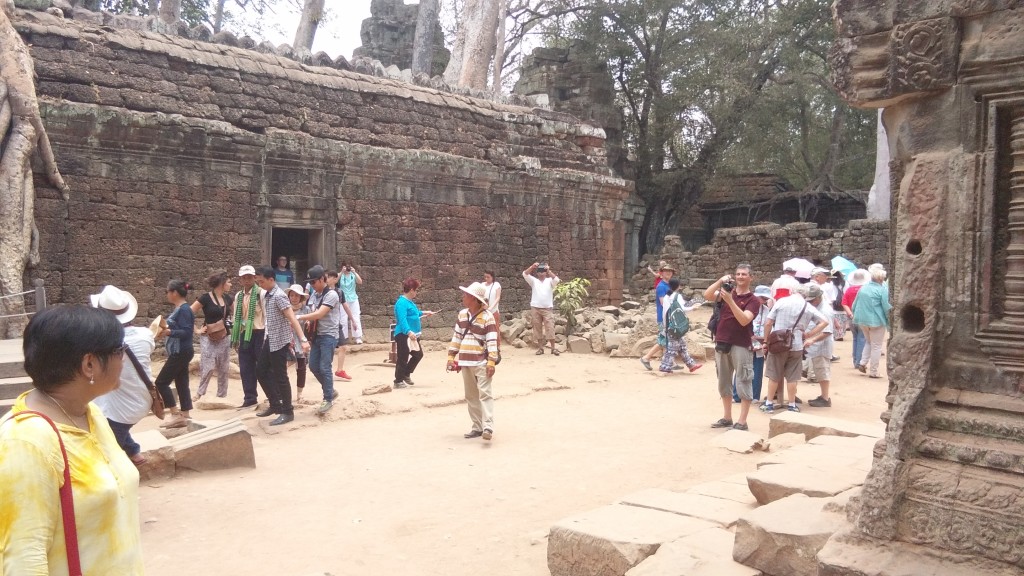 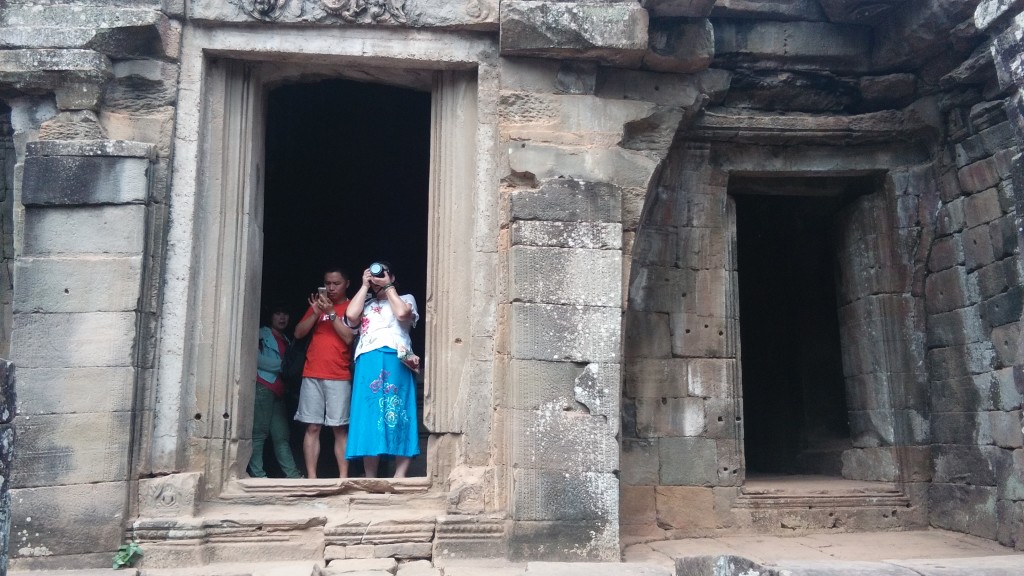 I also want to share some parts of Angkor Wat that haven’t been photographed yet. Prepare for some very exclusive pictures.

The next day we leave Siem Reap. Since I was sick in Laos we are already a bit in a hurry. So we take a bus to the border. We never before have seen such a long queue at a border crossing. Yes, it is touristic here. Don’t fight it, it is like fighting sand in the desert. Anyway, after around 20 minutes we get our stamp and enter Thailand.

Our visit in Cambodia was short, only a week. We saw a lot more environmental destruction than in other South East Asian countries. Cambodia seemed very poor and often monotone. We didn’t visit the capital Phnom Penh, the Cardamom mountains or the beaches of southern Cambodia. We decided to visit Angkor Wat instead. We knew it was touristic, but we were really impressed by the temples of Bagan in Myanmar, so we were curious. After all, the silhouette of Angkor Wat is on the flag of Cambodia. The temples are impressive of course, but completely overrun by tourists. And so we just tried to fit in. Siem Reap, the city next to Angkor Wat is trying to have as many references to Angkor Wat as possible. Big hotel chains have beautiful palaces all over the city. Small guesthouses offer luxury for only a few dollars. 6500 tourists per day pay 20 dollar each to visit the temples, which makes Siem Reap something like the Dubai of Cambodia.
On one hand we cycled through remote settlements. On the other hand we saw one more touristic Disneyworld of South East Asia. In between we felt a bit like real tomb raiders when we discovered some rather hidden temples.
I could tell you what Wikipedia has to say about the history of Cambodia, but we actually didn’t get much in touch with its recent history. Dollars are accepted everywhere. Remains of US influence. The Red Khmer slaughtered a lot of people. Just another South East Asian country where a lot of blood has been shed recently.

Centuries ago a culture was able to build the impressive temples of Angkor Wat. Today Cambodia seems poor and left behind.

Good-Bye Cambodia. May the glorious past be your future.