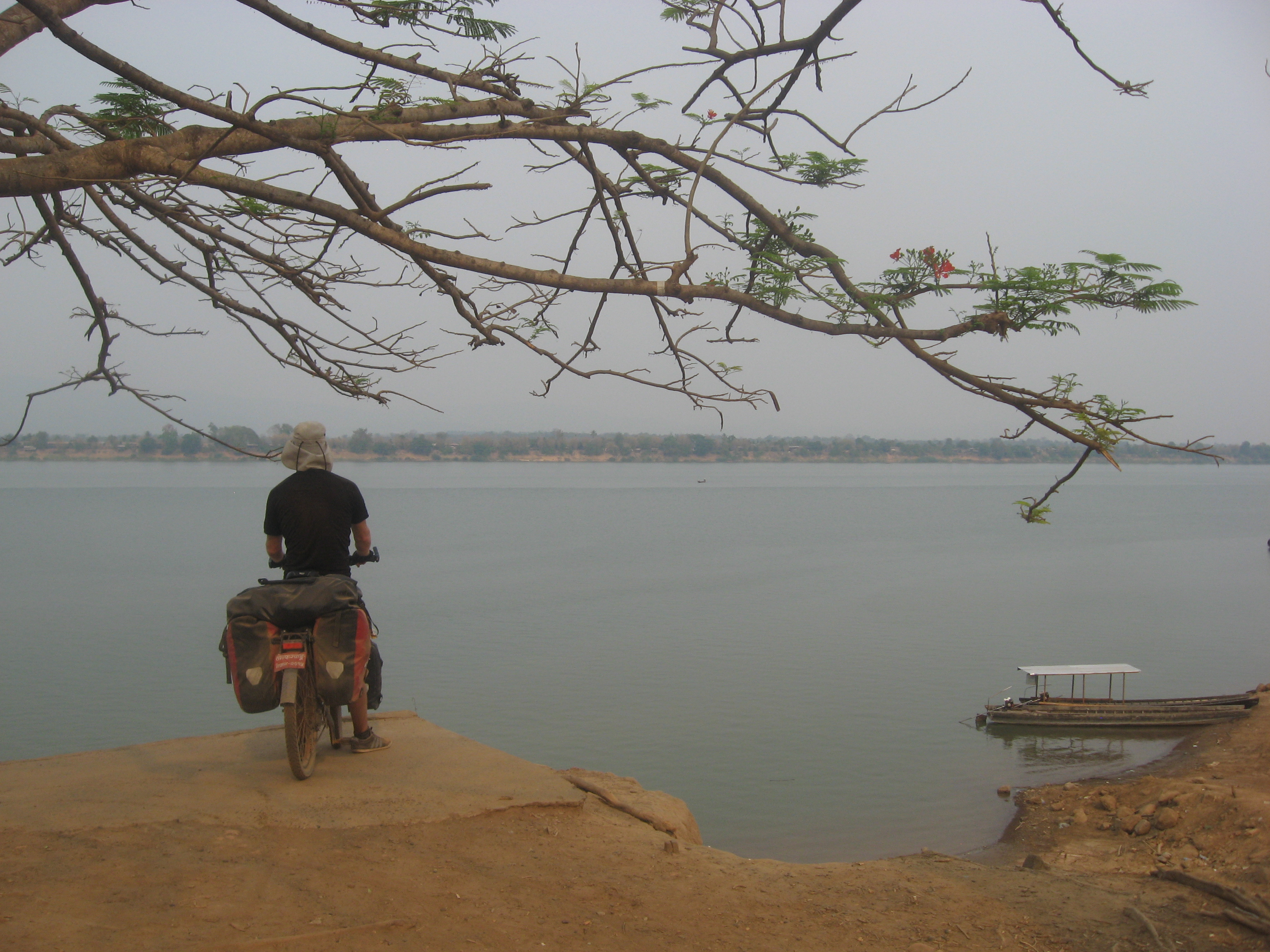 The only country that will leave two visas in our passports is Laos. We enter southern Laos from Lao Boa, Vietnam. Already since we have left the Pacific Ocean, the temperatures increased rapidly. We are now close to 40°C. A few days ago we were freezing and wearing sweater and jacket. Now we have the unpleasant feeling of not being able to hide. The heat is on and everywhere and doesn’t get turned off.

The heat is on, on the street
Inside your head, on every beat
And the beat’s so loud, deep inside
The pressure’s high, just to stay alive
Cause the heat is on

Glenn Frey – The heat is on

The human body’s ability to adapt to different climate is astonishing. Porters in Nepal wear flip flops in the Himalaya. People in Laos wear thick fur jackets because it is only 40°C.

Unfortunately our body has  – again – only one day to adapt. In Ban Dong we are already pretty exhausted. It is around noon and not clear if there is a shortcut to a main road further down south. Older maps show this shortcut, newer ones don’t. We meet a US tourist on the bomb track, who has a local guide. He says the road is good half way to the main road. The second part is a dirt road. Sounds good for us and saves us several hundred kilometers.

Anyway the heat is enormous or at least our bodies haven’t adapted yet. We decide to cool down in the river just a few hundred meters south of Ban Dong. The water isn’t really cool, though. We wait till around 4 pm before we continue. The road is OK, but goes up and down and up and down. We arrive in Muang Nong after dark.

The next day is challenging. The first kilometers are dirt road with very steep parts and deep sand. We have to push a lot. We are already pretty exhausted early in the morning.

Cora falls back a few hundred meters, but suddenly overtakes me in the back of a pickup truck. I continue with the bicycle. Soon I catch up. The road is closed for an hour, because…BOOOOM! Here comes the BOOOOM! Ready or not….we hear a huge explosion and get hit by a massive blast. Road work is under construction. One more detonation they say, before we can continue. For a second we got reminded on how 270 million bombs on Laos must have felt.

The ride continues. We are pretty much alone in the jungle on a dirt track only a few pickups run along. Once in a while a moped is passing us. Still it is more than 20 km to the paved road. In the afternoon the heat is painful. We use every bit of shade to cool down. The water in the bottles, however, is hot.

In the middle of nowhere is a small village. No matter how exhausting these parts of our journey are, they are often rewarding. Away from any tourism, we have unusual encounters with villagers. They have definitely never seen someone like us before let alone the bicycles we cycle on. I stop in the shadow of a tree to wait for Cora, when the whole village gathers around me. They are all smiling and friendly. This happens several times and is moving. We also hear voices from the other side of the valley. I can only imagine, that there live even more isolated tribes that have hardly seen any vehicle. You need to know, that Laos is not a developing country like India. Parts of Laos are just cut of and isolated, because there are huge areas without any road. Sometimes we see dirt tracks, but not many. So there must be quite remote settlements in the mountains.

We have to take more and more breaks. The track is going up and down with very steep parts. After an hour we take a break in another small village under the roof of an unfinished hut. Again the villagers gather around us. They are interested but respect our privacy and smile. The younger ones are even a bit shy.

The track is getting better from now on. We have to cross two small rivers. In the second, we take another bath to cool down. 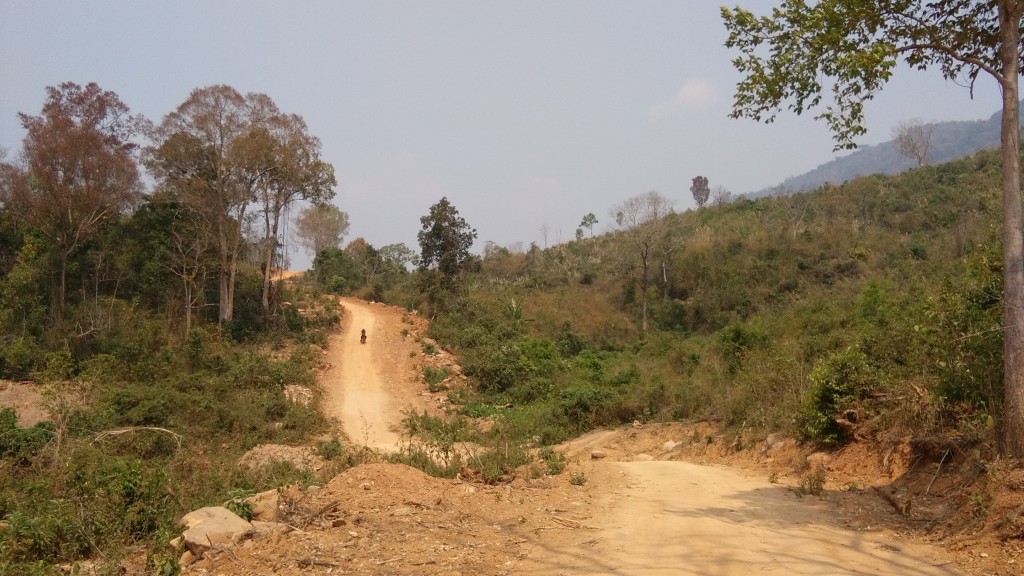 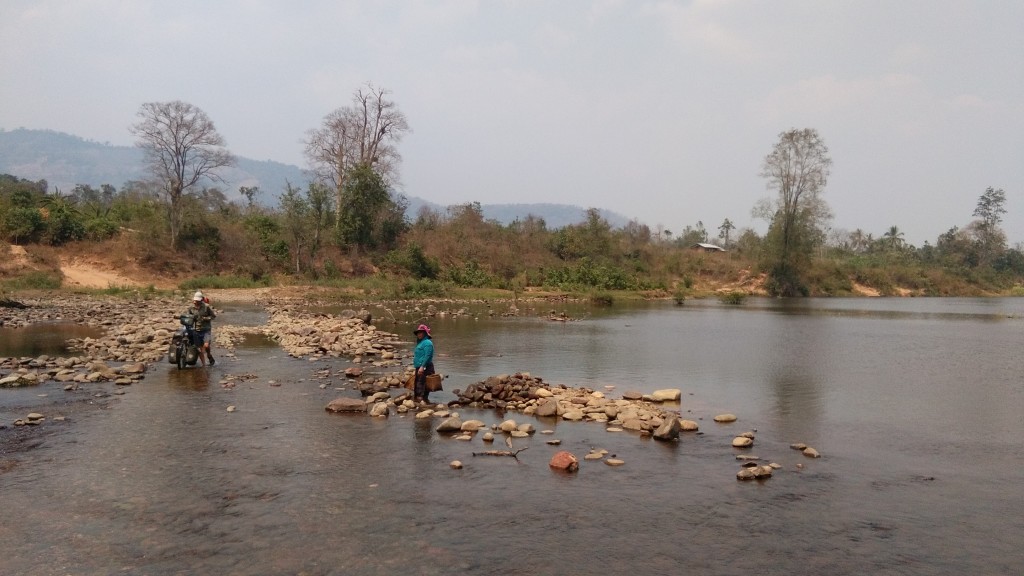 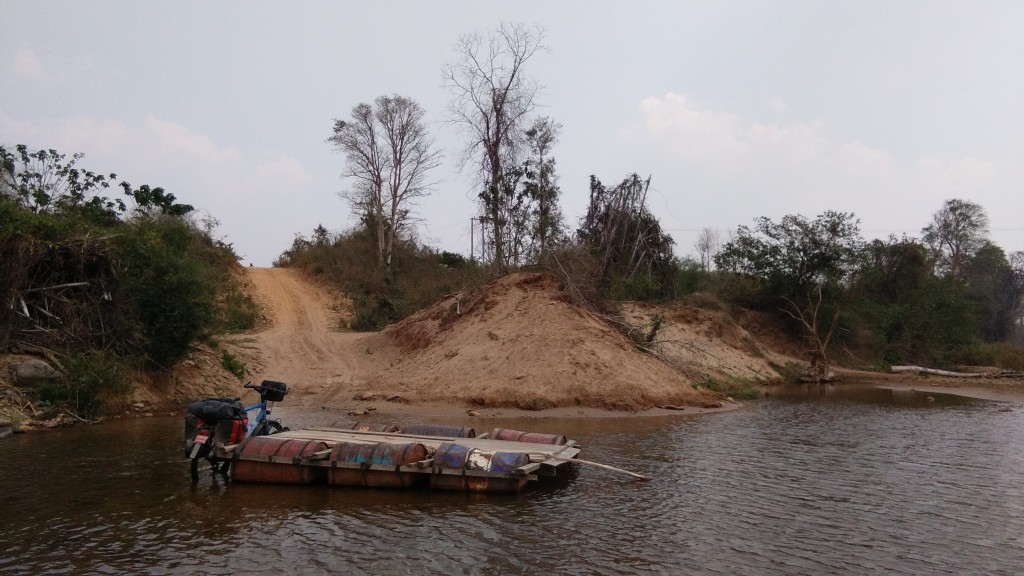 Finally we reach the paved road after 9 hours. Still 18 km to Ta Oy where we want to stay the night. In Ta Oy is also the first ATM since we entered Laos. Unfortunately it doesn’t accept VISA cards.

The next day we get up at 5 am to escape the heat. The road is well paved, but the road building companies seem not to know the concept of serpentines. The day in pictures: 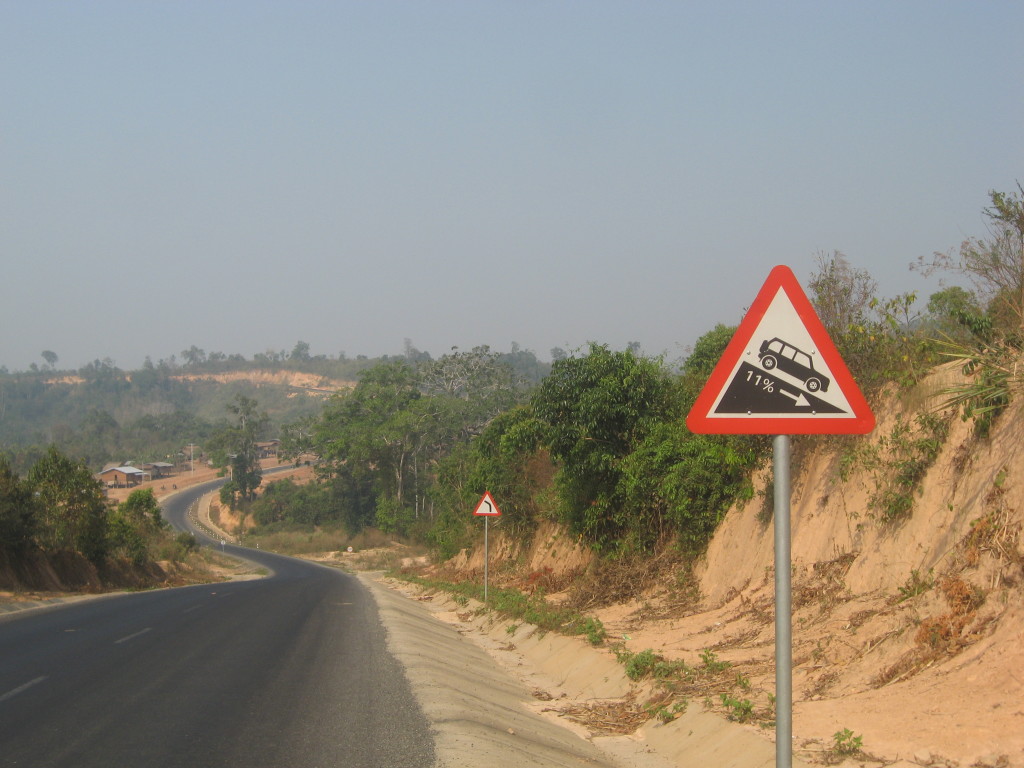 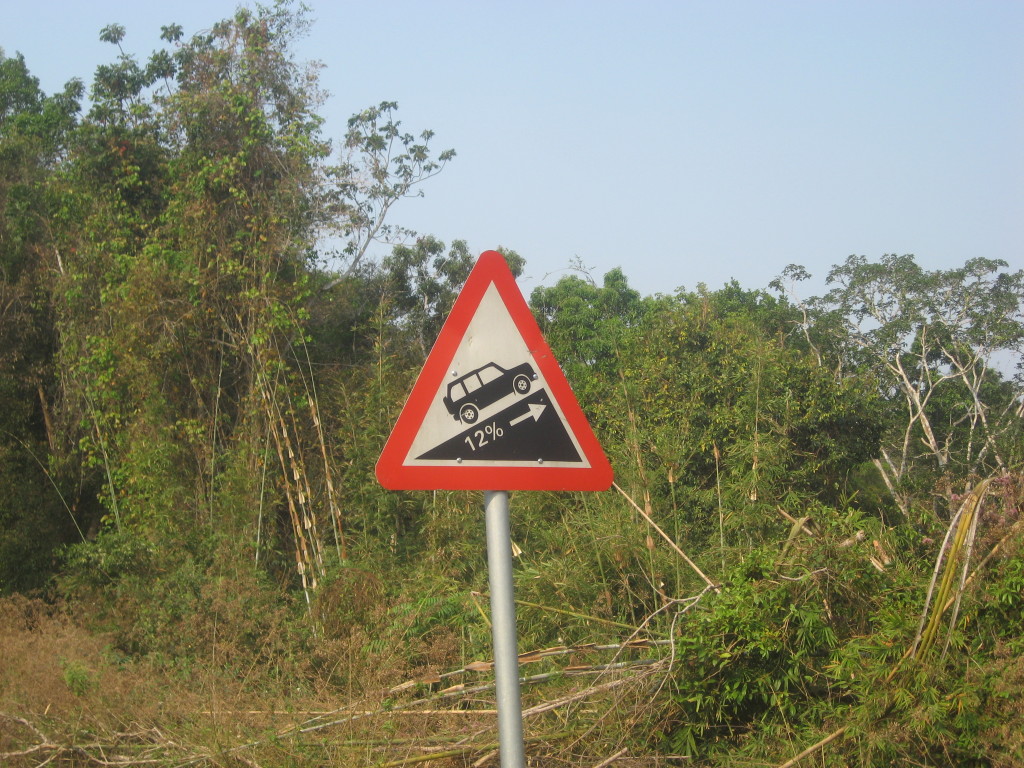 At noon we take a break but cannot cool down. We spend the last money on Pho and try to hitchhike. It doesn’t work. We cannot wait until evening, because the power of the Pho is already digested by then. We have still more than 35 km to go. The temperatures are way above 40°C. The humidity is sauna-ish. In the morning the trees cast long shadows. At noon we are happy for shadows that cover our face. Our goal for today is Salavan. O’Salavan, it feels like cycling to an Irish Pub knowing they ran out of Guiness. Around two hours before we arrive my body stops sweating. As a side note: You drink 8 liters of water a day, but you don’t have to use a bathroom once.

I pour the water from the bottles all over me to stay cool until we finally arrive in Salavan. I wobble to a guesthouse which is way to expensive. I wobble to another one which is the same price and worse, but I have no more power to be picky. Cora feels a bit better. The reason is soon obvious: I have fever. I just didn’t notice it, because of the strong heat. The fever isn’t serious so the next morning we decide to continue only 30 km to Tad Lo, which has some waterfalls and seems much more a place to relax than Salavan. In fact it is.

We take a bath right below the waterfall and the water is surprisingly cool. Later three tourists come. It is a rather peaceful village where we stay two nights to make sure I recover properly.

The next goal is Pakse around 90 km away. We again start very early in the morning. At lunch we arrive in a small village with another waterfall. We go to a pretty big restaurant where buses of tourists get unloaded. A sheet in German is laying on the table. On it a Lao guy explains how he got the permission from the government to prepare this area for tourism. When he arrived there was no road. The tribes people had shot almost every bird from the trees and caught almost every fish, because they didn’t find any other food. With elephants they started to clean the river and removed a lot of dead trees to make the river and waterfall reachable again. The restaurant we were sitting in was build mostly of these trees. Then they started to make the whole area like a park by removing bigger rocks and building a road. They even built tree houses in the style of the tribes people, where tourists can sleep. Finally, they opened up a museum to share the history, life and traditions of the tribes people. When everything was done and the restaurant had opened for two days, the Lao guy who coordinated all this got Malaria. After being in coma he woke up blind.

That was 10 years ago. So sitting in this restaurant we realized that the people serving us were the first generation to have such a job. They benefit a lot from this kind of tourism. They can go to school and even use their skills in running a business at their own village. It feels strange to know, that only a short time ago we would have passed this village, not knowing that it even exists and has a beautiful waterfall. Luckily it is not spectacular enough to be run over by tourism one day.

After lunch we continue and reach Pakse at dusk.

The next days we stay on the western side of Mekong river and cycle towards 4000 islands.

The first island we enter is Don Khong where we stay at Muang Khong. We continue down south on the island on a small trail through some villages. With small boats we cross from one island to another finally reaching Don Det, which is a backpacker hub. We continue to Don Khon the same day and find a little guesthouse at the edge of the village directly on the river. We decide to stay two nights here, but I already tell Cora, I could easily stay longer.

The next day my wish comes true: I have fever above 39°C. My throat hurts and after looking at my yellow coated tonsils it is at least clear that this is not Malaria, but an angina, probably delivered by a European tourist. Of course I don’t like being sick, but there is at least one upside: While Cora is laying next to me in her underwear trying to sleep in 35°C without getting boiled, I am hiding fully dressed in my sleeping bag and it feels just warm enough.

And right now I am sitting on the porch above Mekong. It looks like this.

We stayed four nights already and I am starting to feel better. After another night here, we will probably cross over to Cambodia tomorrow.

Our second time in Laos was hot. We only had hotter days in Turkmenistan. I got sick twice, which I didn’t like, but everything turned out well. We enjoyed the sugar cane juices you even get in small villages, the many different fruit shakes made of all kinds of fruits and the beautiful landscape, especially 4000 islands. Laos is touristic, in the north and south and there are obvious reasons for that. The south seems to fit more for backpackers, whereas the north looked like a destination for eco and adventure tourists. We had quite unique experiences in remote villages especially here in the south and leaving the paved road to suffer on a dirt track like so often paid off. We were lucky, we didn’t run out of money and at one point I thought I am close to a heat stroke. Despite the tourism, Laos often felt like the least developed country we have visited so far. It made me sad that this little country has been bombed so heavily. An interesting article on the subject can be found on National Geographics. I would also like to write about it, but this is not a political blog.

And the Lao people don’t seem to be bitter. They have a mystical smile that no bomb was able to destroy. Their spirit is unbroken and I feel a deep respect for how they manage to move on.

2 thoughts on “The heat is on – Southern Laos”