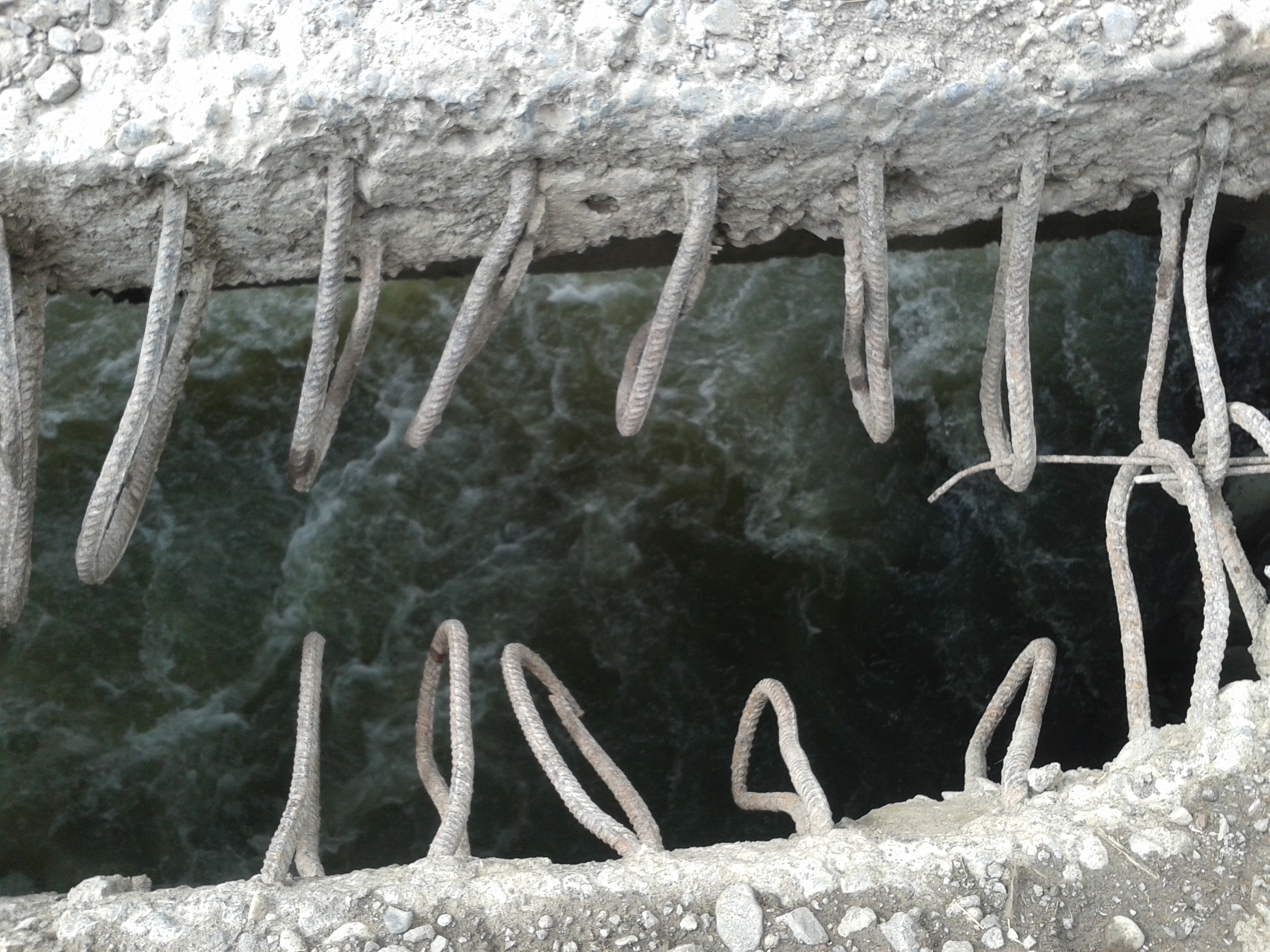 We in Germany have very very high standards of living. Of course you all know that already, but for me it took several months to actually see how far countries like Germany have come regarding things you don’t even think of most of your time. Let me explain…

Work It Harder Make It Better
Do It Faster, Makes Us stronger
More Than Ever Hour After
Our Work Is Never Over

It starts when you take a look at roads. Our roads are very very good. We have paved roads! And not only the roads are paved, also the bicycle lanes, marketplaces, parking areas and driveways.  There are standards for the maximum height of a border stone and that it has to be lowered at a driveway.

Roadside ditches are covered. And I mean every single meter. There is no hole where you can fall down. Actually most people born in Germany within the last 20 years have probably never seen a real road side ditch. What you see is only the perfectly paved sidewalk covering it.

We have traffic rules and you get a fine if you don’t stick to them. Someone driving the wrong way – a so called „Geisterfahrer“ (ghost driver) – is the most terrible road danger in Germany. They interrupt radio broadcasts, if there is a Geisterfahrer and warn everybody on the road about the danger. In Iran this ended and since then Geisterfahrer are just normal traffic participants.

We have traffic lights for cars and pedestrians. Sometimes even separate ones for bicycles. We have zebra crossings, level crossing gates and bicycle lanes.

And street lights. Streets, places and parks are illuminated all night long. I remember Kapan in Armenia, where we wanted to eat something and were wandering around in the dark. Still the restaurants were open, but they seemed like an oasis in a desert of darkness. People were on the streets, but it felt like they left their homes after an earthquake. It is just so unusual for us, that it is completely dark at night. Same in Khiva, Uzbekistan. We were walking around with our flashlight, but most people don’t use or have a flashlight. They just walk around in total darkness. Then you of course you need to know where exactly the manhole covers are missing.

In Germany every staircase must have a railing according to DIN-Norm 18065. Stairs must have a minimum and maximum height and depth. In Turkmenistan I almost fell down 2 meters, because there was no railing on the side of the staircase to the entrance of a bank. You couldn’t open up a bank in Germany unless your staircase has a railing.

In Germany electric cables, phone lines, wires etc. are hidden or properly laid out by a professional. Only high voltage lines are hanging above the street – clearly separated and very high up. Sockets are safe. Special sockets have to be used in bathrooms for security reasons. Becoming an electrician takes years of education. But most important: In my 35 years in Germany I have never experienced a single power failure.

All these high standards ended already somewhere in Serbia and got really bad in central asia. You have to watch every step. And especially with the bicycle you often can’t move. 40cm high border stones, fences in the center of the street for kilometers without any gap. Holes, trees, cables hanging across the street – often low enough to hang a European. You don’t see things like this in Germany. It is amazing how much thought and effort has been put in the task of building roads in Germany. Really everything fits together properly. Amazing.

But it doesn’t end here. Our cars have to get checked every second year at the TÜV. If they fail, they can no longer be used on European roads. We also have exhaust filters. And we are not allowed to overload our cars.

We all need to wear seat belts and helmets in Germany. Soon even cyclists. And we spend time and money to get a driver’s licence. We cannot just buy one like in some parts of India and then start driving a bus full of people. A lot of motorcyclists in Germany wear special clothes for protection. That’s just a safety recommendation, but recommendations almost feel like laws in Germany. Even bicycles have to have lights and reflectors by law. The minimum brightness of bicycle lights is specified by the same law. You cannot just use any light. We have sidewalks everywhere. If the sidewalk ends then they put a sign there to tell you to switch to the other side of the road.

I cannot talk about work safety here, because then there will be no end to this post. Let me put it this way: When my neighbor cuts his hedge he wears the complete STIHL safety clothes. That means working in the garden for him requires wearing a helmet with visor, gloves, thick safety trousers and jacket with reflectors and safety boots. And this is not his profession, so the work safety laws don’t apply here. He is doing this for fun on the weekend.

There are no seat belts in most of the countries we have been to. As long as the brakes work a vehicle is considered safe. We had to change the vehicle twice, because the brakes stopped working, though. Lights are not needed and not used. Why use them, when you have a horn. People hold on to the side of cars or sit on top. Every vehicle can be used for everything. A bus is also a truck, a truck also a bus. A motorcycle is an animal transporter, an animal is a motorcycle transporter. A bicycle can carry a ton of wood, stones or metal tubes. A chain saw is a luxury, not a thread and nobody has a hedge – they have fields. And in many countries working means risking your health constantly – and often your life.

Toilets are a completely different story. We have sit-down toilets and a sewage channel system. Forget it. If there is a roof above you and a hole below you it’s fine. If!

Children. Oh! My! God! A European mother’s worst nightmare. Toddlers running around on the streets with lots of heavy traffic passing them by half a meter. I watched a boy playing „ice-fishing“ over a manhole. The hole was several meters deep and half filled with water. Nobody around. Six year old children riding horses and donkeys, playing with snakes. 12 year old boys tending a herd of around 100 sheep somewhere above 3500m altitude in the middle of nowhere in Kyrgyzstan. All alone. Two half naked maybe 2 years old girls running around with a machete in Laos. 5 children climbing in the trees above the street. Toddlers running around the stove, that runs on wooden fire. On top – within the child’s reach – a pot of boiling water. Nobody cares. Ten year old children driving motorcycles, having a baby on their lap. Small babies holding on to the steering bar of motorcycles, while the father drives with 70km/h. Nuff said. A bit frightening sometimes.

However, not having our standards of living doesn’t mean living in poverty and you don’t suffer from it on a daily basis. I can tell you, because we live like that for almost a year now. People in the GBAO of Tajikistan for example live very simple lives, but they enjoy life. They work on something and improve, maintain and care for everything and they show you what they have build and how nice everything looks and they are proud. It is simple, yes, but it is beautiful. It really is! And people like this you find everywhere. They sit together and have a good time and then they drive home without a seatbelt and use an outside toilet that smells a bit. That’s not poor. Living a life like that is more fulfilling than living 50 years in the Burj Kalifa in Dubai with all the luxury, safety and tidiness you can think of.

Here is one thing, though, that bothered me a lot. Traffic rules, work safety and also looking after children is something we put a lot of effort in. On one hand, that is a good thing. We have less accidents in traffic and at work. And children in Germany are rather safe. On the other hand, the growing number of safety options puts a lot of responsibility on every single one of us. We have reached a point, where you can track your child via its smartphone. People already start to implant micro-devices into their children, so they can be easily found in case of an abduction. And I think every parent fears the moment when something happens and you could have bought this additional safety belt or the more expensive and safer toy. Or just ask yourself, if you always wear safety clothes when working with a chain saw. We create a constant responsibility reminder out of fear and it almost fades into a lack of sympathy. Let me put it this way: If you cut off your leg with a chain saw in India, it is a tragedy and people will suffer with you. If you do the same in Germany, the first thing you will probably hear is: „Why didn’t you wear safety clothes?“.

So on one side it is a form of sympathy to educate each other in limiting risks. On the other side it seems to go hand in hand with losing sympathy if something actually goes wrong, that could have been prevented. In my opinion a lot of stress in Germany is a result of this paradox. We all want responsibility. Still we all need sympathy. And how can a child become confident and take responsibility, when there is more trust in a satellite system and a computer chip than in the child itself?

But it is not all about safety and technical standards. The actual danger is, when social standards drop. Several times we have crossed parts of countries, where alcoholism and drug abuse is a big issue. Drunk people everywhere. People don’t know what to do or maybe they know, but it is not appreciated so they refuse to work. Because actually there is always a lot to do everywhere.

They may have modern ceramic toilets in tiled bathrooms, but these regions feel like the shithole of the world. Nobody cleans anything, nobody does anything, nobody cares. Everybody wants to be the one telling others what to do. Everybody is waiting for someone else to start changing the situation. And so the big pile of shit grows every day.

Two things usually go hand in hand with such a situation: Corruption and Tourism. Both bring money to only a few for very little work. You then have people that own hotels, but have no idea how to maintain them let alone how to treat or even train an employee. Everything is dirty, nobody cares and you will never find any hospitality in theses places.

So from what we have seen, I can only tell that Germany is first and foremost on a very high social standard of living. And I don’t mean, that we have health insurance and other social security. I mean, that people are educated to care for the public, for the people. And still, Germans often doubt their own ability to care and tolerate. And that’s actually a very very good sign, too. It keeps social standards alive and vivid.

(Who stops getting better, stopped being great)