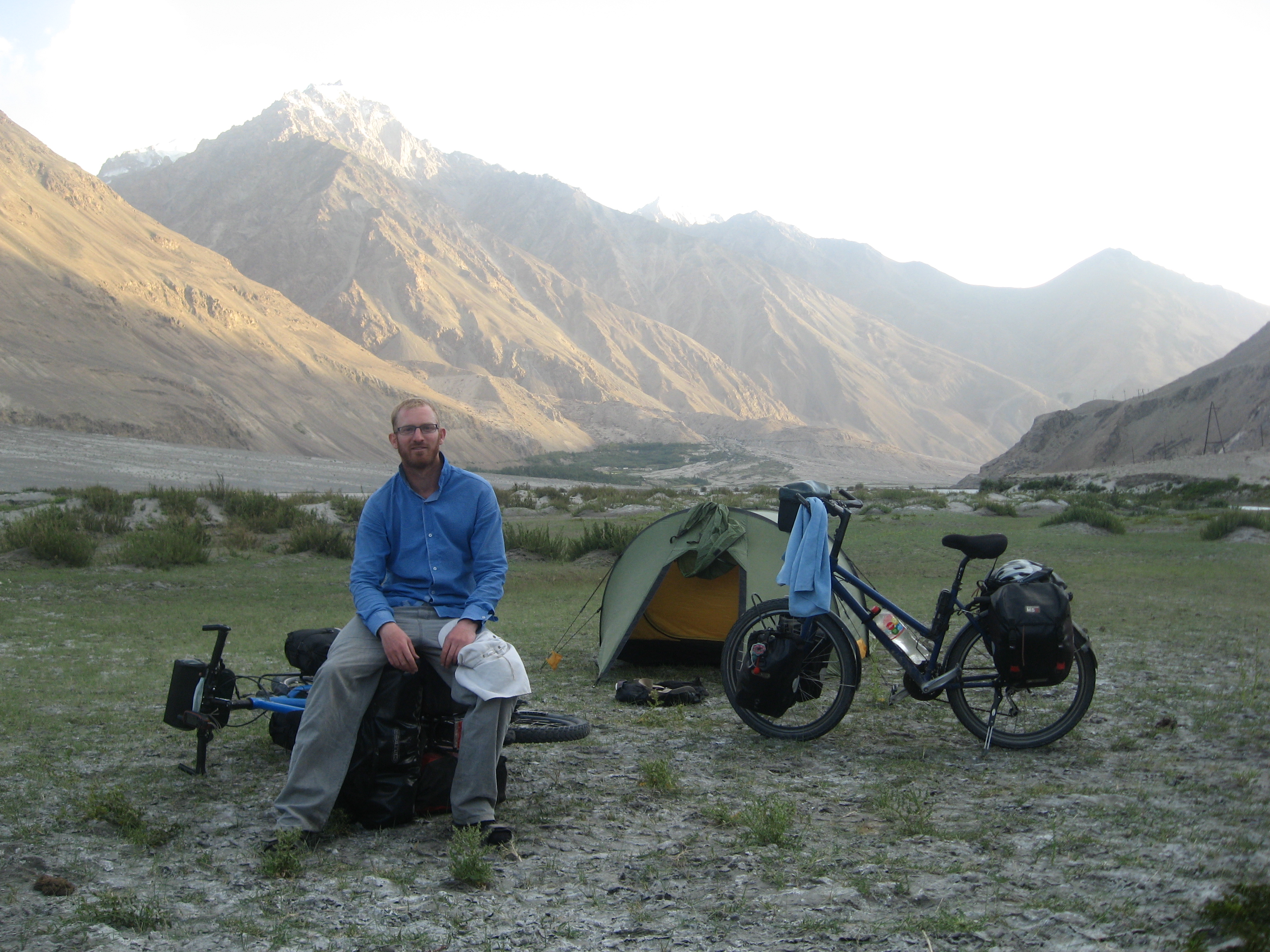 We more or less have decided to travel by bicycle because for us it was a good mixture of flexibility and speed. But we didn’t put much more thought in it. However, it turned out to be the best way to travel I can imagine. As a child I went on holidays with my parents, so that was the first way of traveling: Being here, then being there. As a teenager I was mountain biking a lot and finally when I was 17 I crossed the Alps together with two friends of mine. This tour was the biggest challenge I had done until then and it stayed on top for quite some time. Later I did a lot of trekking thanks to my friend Johannes, who taught me a lot about camping gear. During my time as a student I started hitchhiking, after I met a guy at Tegernsee who managed to hitchhike from Berlin to Tegernsee (600 km) within one day. So in my early twenties I did my first attempt in hitchhiking mostly because I had a long-distance relationship and wanted to save money. But it worked so well I became a huge fan of it. I always wanted to hitchhike to China, but then started to study a second time and finally started to work…

We also thought about public transportation, backpacking and even using my car. We had the idea to drive it until it breaks apart and then see how we can manage to continue. Funny enough it started falling apart weeks before we left. I had difficulties to sell it. On the other hand, with the knowledge I have today, I had known that we could have made it around the world with it. Because in any other country outside Europe, my old Golf 4 would still be a high class vehicle.

So we had a lot of options, but decided to chose the bicycle. I had never cycled with four panniers and a loaded bicycle of 70 kg before, though. So that was also new for me. I still had a lot of knowledge about bicycles from the times when I was mountain biking, but I had also doubts if a tour around the world with bicycles and a tent will always work out. And I remember during our time on the black sea ferry I envied the Swiss families in their Mercedes transporters. Plenty of room, a heating, a proper bed and enough space to carry supply, camera equipment, a notebook and even souvenirs. And on some very long days in Bulgaria I already realized, that sometimes it might be nice to make 400 km in one day instead of a week. You definitely need patience for cycling. At that time I maybe didn’t have enough.

But our physical fitness got better quickly. That meant less time for long distances. Also mountains got normal. The first mountains were huge obstacles and took days. Soon we wished for mountains just because the temperatures are lower up there. And finally the mountains of Sikkim were more or less to relax after the Annapurna Circuit.

Cycling also turned out to be the right speed of traveling. In my opinion it is the fastest you can go if you still want to have the full experience. Because we see every meter. We feel every meter. Every mountain takes a lot of effort. We feel the heat, the rain, the cold, the wind and we hear everybody who talks to us, waves at us, honks at us or runs towards us. There is no radio playing and no air condition running. We get really everything that happens around us. And when we pitch the tent somewhere in the middle of nowhere we hear the animals and see the stars above us. We feel how the night gets cold and so we have to hide in our sleeping bags. We see every sunset and many sunrises. We see the mist in the grass and on our tent. And constantly we are aware of the weather. I can tell you something about the weather in every country. Not only during the time we were there. I also learned about the times when it is better not to visit a country with the bicycle. Like Central Asia during continental winter with -40°C or South East Asia during rainy season. The Karakum desert in Turkmenistan is not some sand dunes I saw while looking out a window of a fully climatized travel bus. No, we felt the intense heat that wants to kill you. In Kyrgyzstan we saw the snow coming closer every day and felt how temperatures went down. But we also saw how even small areas can have their own climate. Like the valley between Armenia and Iran, which was extremely hot. Or the area around Issyk Köl, which was rather mild. And that’s why after 12 months, I have this feeling we have truly crossed half the planet. Of course only on a very thin line.

And that’s only the climate. Of course we also get in touch with the people. And I really mean the real people not professionals. As a child at the beach in Italy with my family, I have never seen any Italian. What you see during holidays are restaurant owners and ice cream sellers and guys walking on the beach selling sunglasses. And this is not only in Italy. This is the same where ever tourists are. You watch professionals at work and you are the work. You are the customer. But going by bicycle makes you a traveler and no longer a tourist. Tourists expect the standards they are used to. They don’t want to get to know the other culture. They want to see the top 10 sights and then they want to complain about the cold Latte Macchiato like they use to do in their home country. But travelers observe and preserve.

We depend on the people, because we cannot reach the next hotel or the next gas station easily. People cheering at you, throwing a water bottle out the window in completely isolated places on earth is something you cannot experience when you go by car or with a motorcycle. And the people factor is one of the most important for me. Sometimes the landscape can get boring and the weather can get bad. But people don’t stay the same or change randomly. People get „activated“ exactly when you don’t expect it. You get stuck in the mud and your knee hurts and suddenly a soldier starts pushing your bicycle. You feel weak and about to collapse and suddenly someone gives you a lift. You are sick and suddenly you stay at some people’s home and get an infusion. And you will never experience this unless you do something, that won’t work without others. We didn’t have luck in all these situations. It is not about luck. People see that we tried our best and are stuck. Then they help. That’s not a miracle, that’s the pure essence of being a human. Car rentals, air conditions, smartphones, travel agencies and the internet may help you plan and enjoy your holiday, but only people will help you keep going when you are stuck. And that’s where traveling begins.

But even when you travel, there are different ways and it is often difficult to find the right one for you. Maybe you noticed that we haven’t visited the Taj Mahal, even though we were only a few kilometers away. Because this is sightseeing and that’s not what we do. Matt does sightseeing and he is great at it!

We also don’t count the countries we visited. That’s why we didn’t visit Bangladesh or Bhutan, even though they were both only a few kilometers away. We also didn’t go trekking and we skipped the Everest Base Camp. We didn’t stay a few weeks in a small village and dove into the family life of remote shepherds. And we didn’t help build a school. We didn’t take a GoPro with us and captured one of the countless amazing downhills. These guys took a video cycling around Annapurna Circuit, though. Watch it if you want to see what we actually did there.

It would also be great to concentrate on taking pictures of animals, sunsets and of course of the people. It would be great to read more about the history and culture of each country to fully understand what’s going on. It would be interesting to work in each country and to have an apartment – or a hut. But we don’t do any of these things.

We cycle and everyday we decide to do exactly this. If you also want to go sightseeing and do voluntary work and experience traditional life and also hike and want a professional video of you doing all this and and and….you end up doing nothing. Because like with every decision you make, you have to let go all the other options. That’s why we also sometimes have regrets.

But then again too few to mention.

One thought on “I like the way we move”