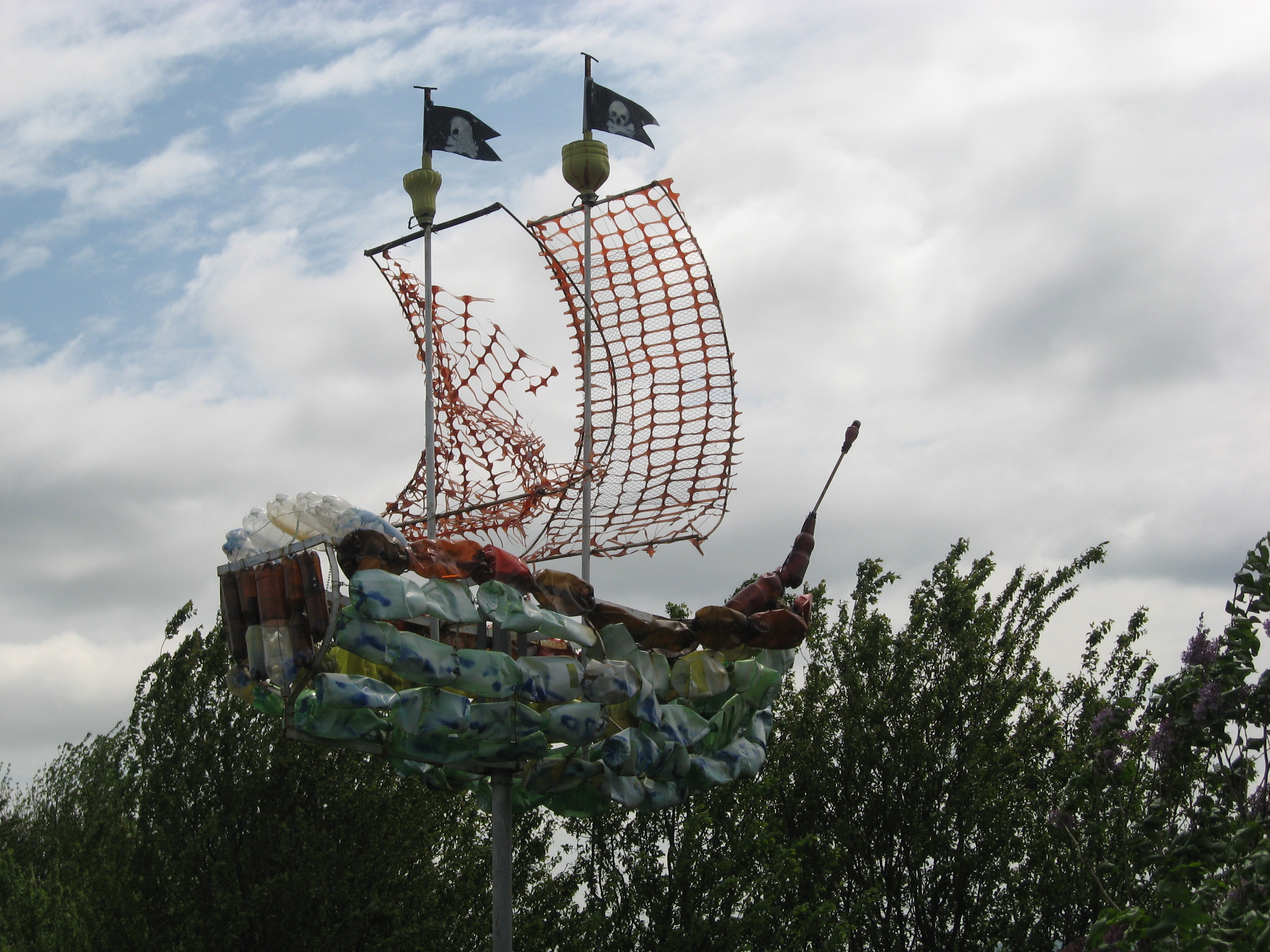 This is a post written after weeks of daydreaming. It includes some hippie attitude as well as some „I’m a dreamer, but I’m not the only one“-logic. And at the same time, none of that. If you like that and are not confused easily, read on.

I’m thinking about this post for quite some time already. Actually since Serbia, when we saw a lot of waste alongside the roads.

But I didn’t just want to point that out and so whenever we had long trips on paved roads or slow uphills I thought about this topic again and again. Because in the end, you people are all the same, it only takes time to see it sometimes. But let me start at the beginning.

As I said, it started in Serbia. In the roadside ditches we saw a lot of waste. Plastic bags of course, but also fridges, car parts, tires, plastic bottles, cans etc. And a lot of construction waste, too.

Actually we already saw an increasing number of cans in Austria and Hungary, since they have no deposit on them. But in Serbia it really started to ruin the landscape. Waste everywhere. At every shore, in every little river and at every resting bench, if one existed. And I don’t mean in cities, where it is easy to get used to it. No, mostly on the countryside. In cities only the toilets got worse.

Now I know, that many people consider Germany an outstandingly clean place. And that was my first though, too: We are doing it right! (clap on my shoulder). They are doing it wrong.

But again: You people are all the same.

I further thought about it and came to the conclusion, that introducing deposit on plastic bottles and cans would be such an enormous logistical endeavor, that it is just not possible in countries, where they still have a lot of corner shops. Because in this case the decentralized shop system has its drawbacks.

Unfortunately I didn’t take pictures of all the waste. But in Bulgaria, I think the same day we arrived at the Black Sea, Cora was amazed by a creative mastermind of one of the dumpsides and took lots of pictures. This guy just made art of all the garbage. And because he probably never had an exhibition, I will show this here. 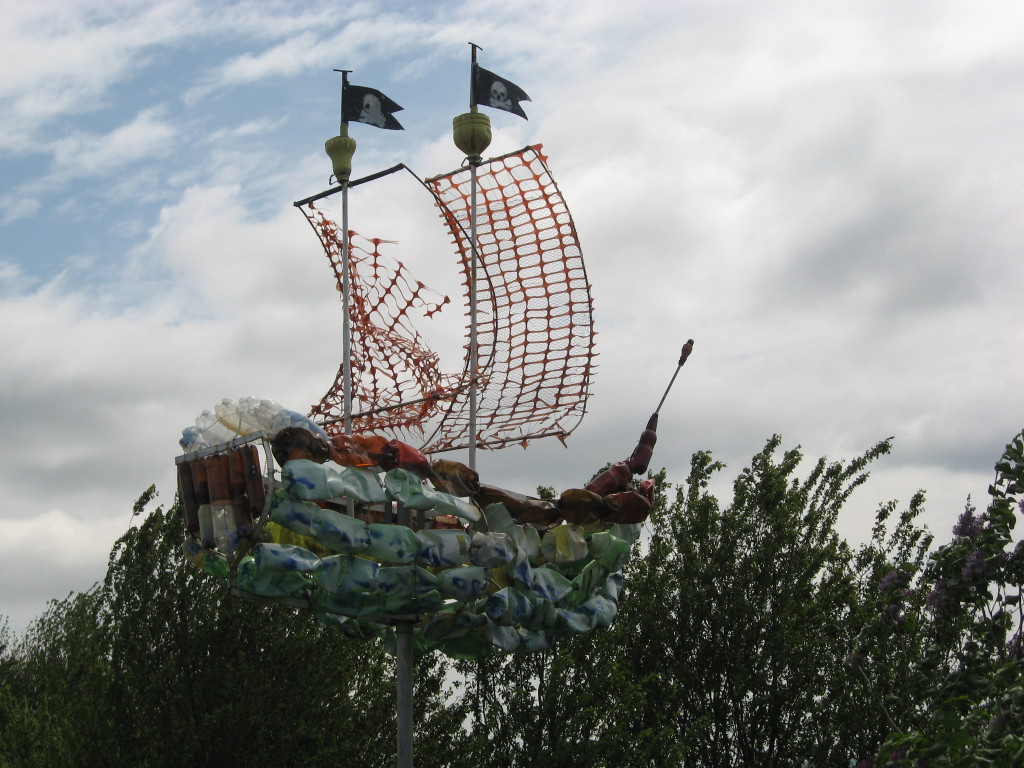 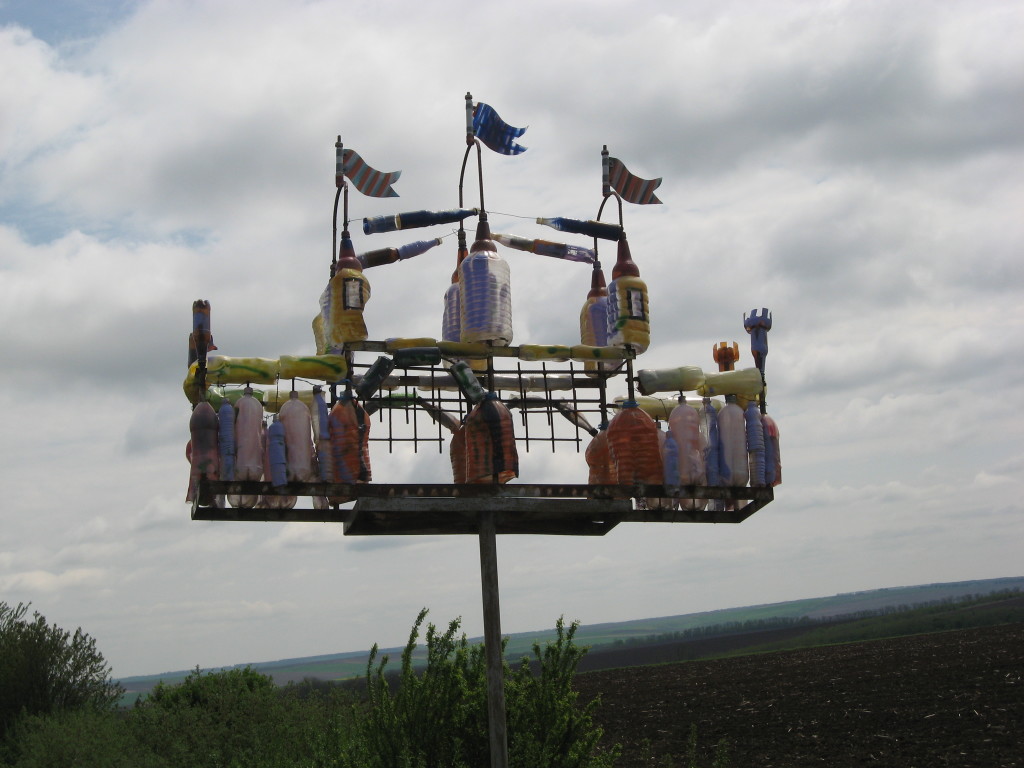 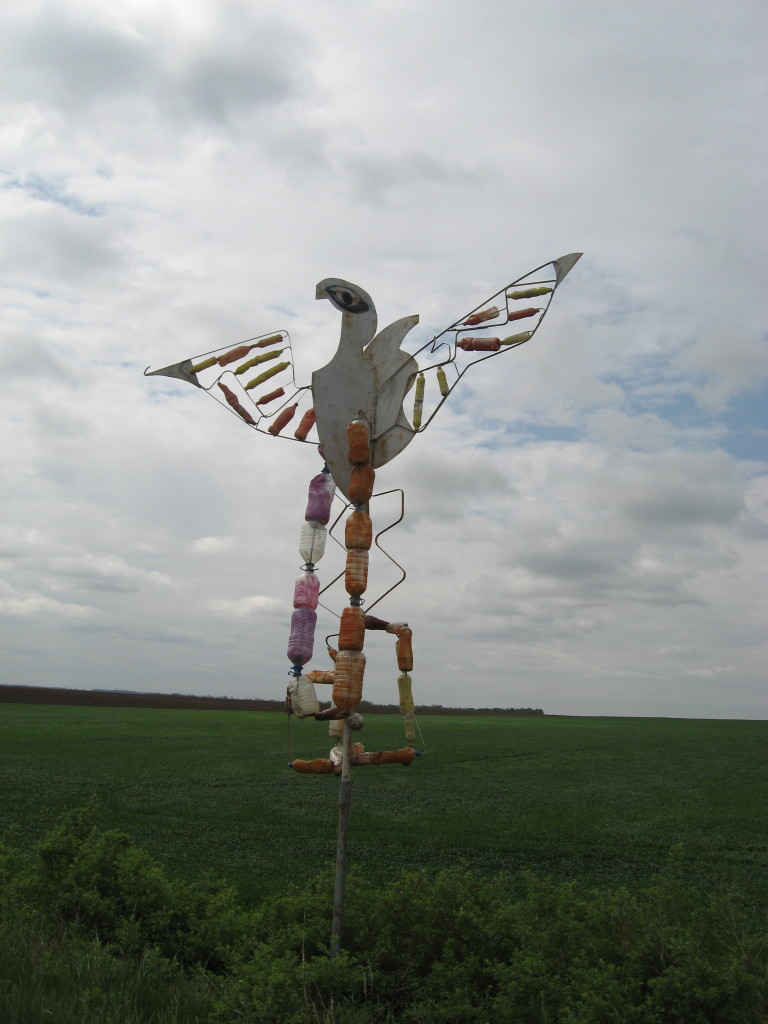 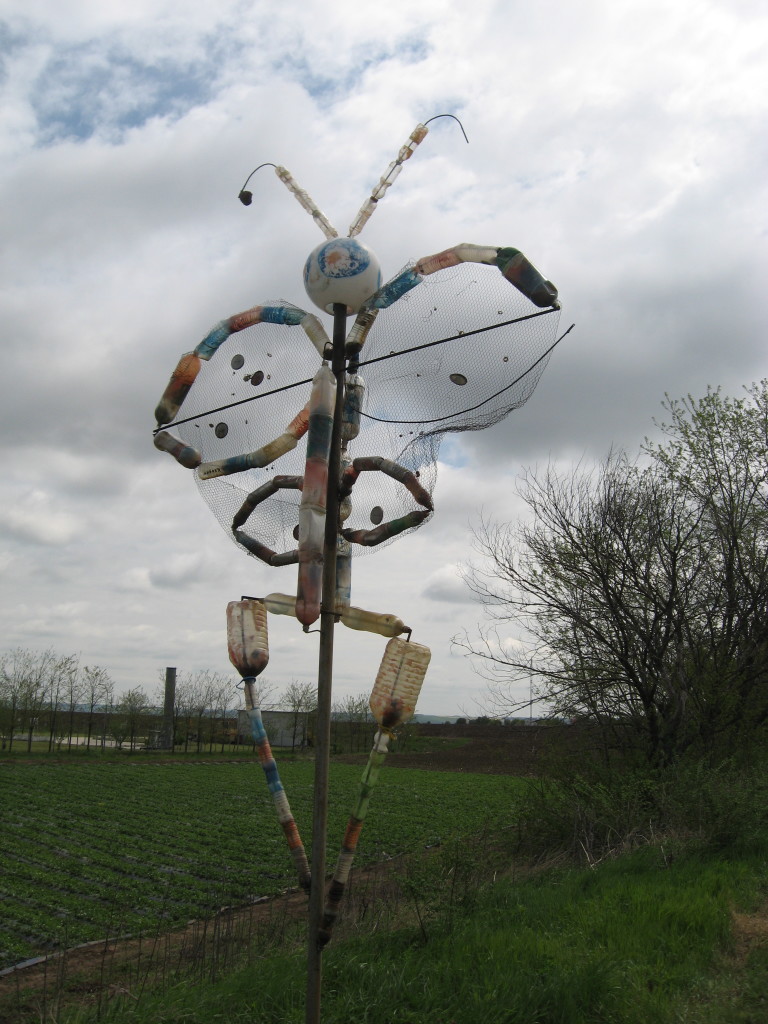 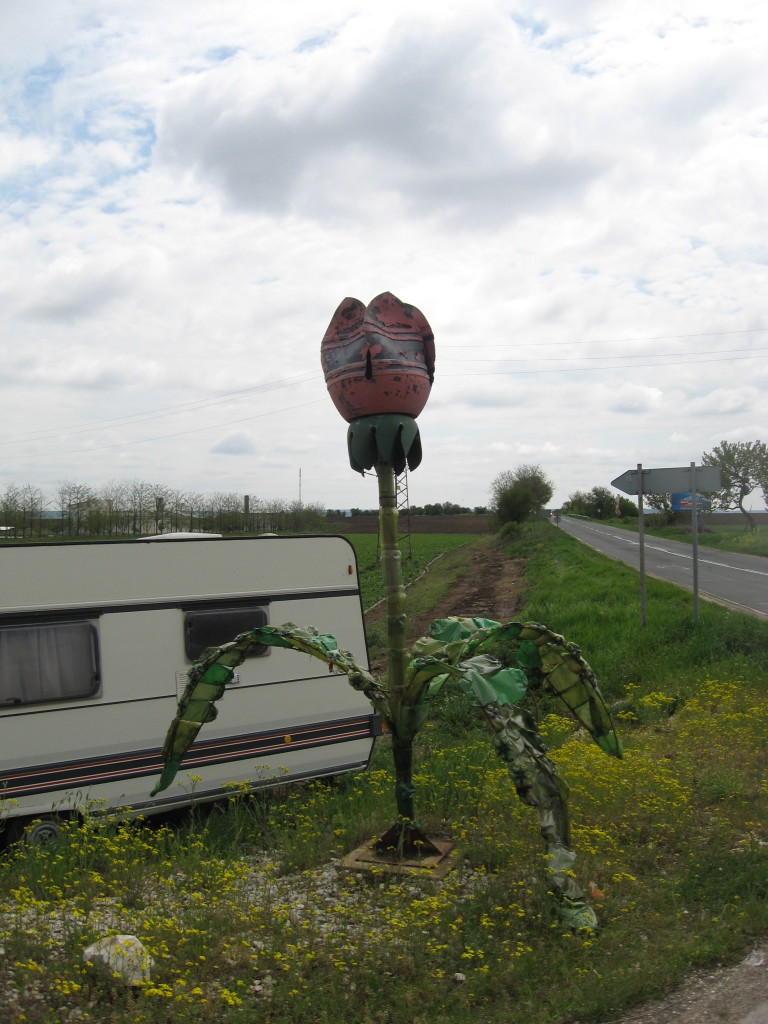 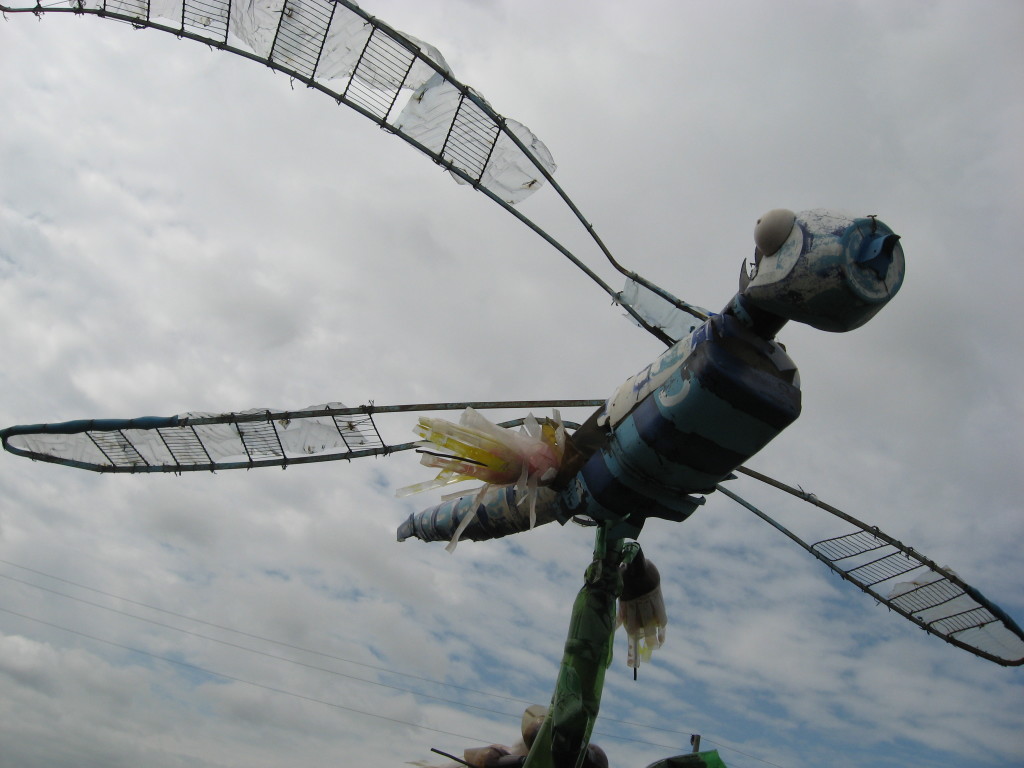 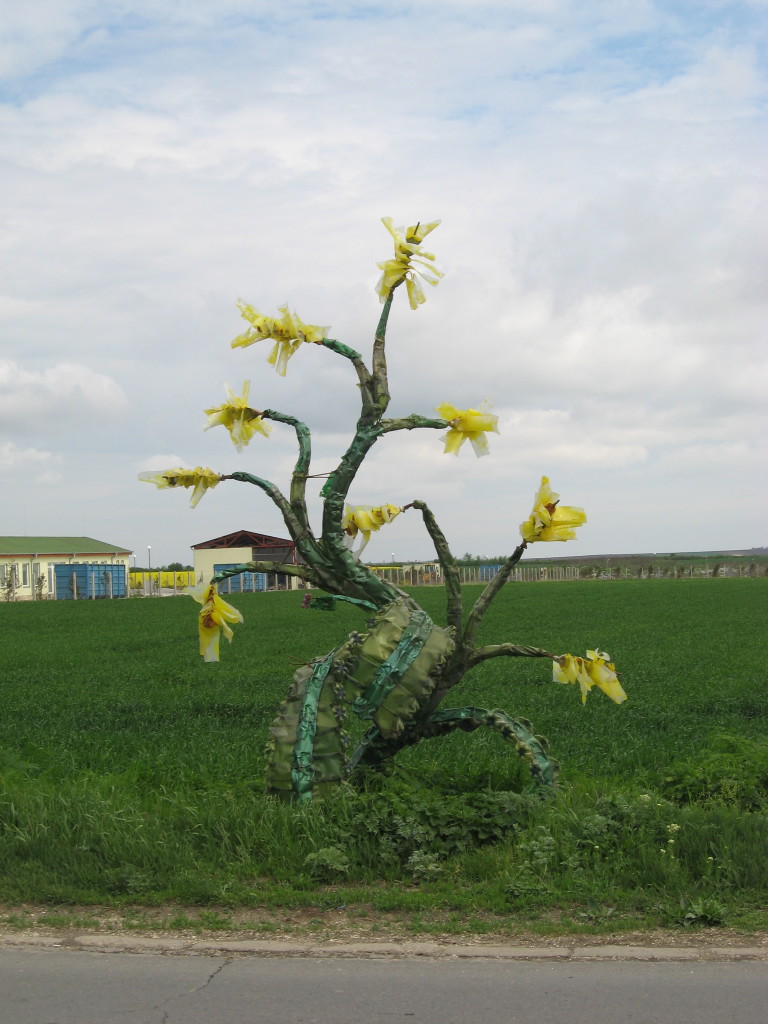 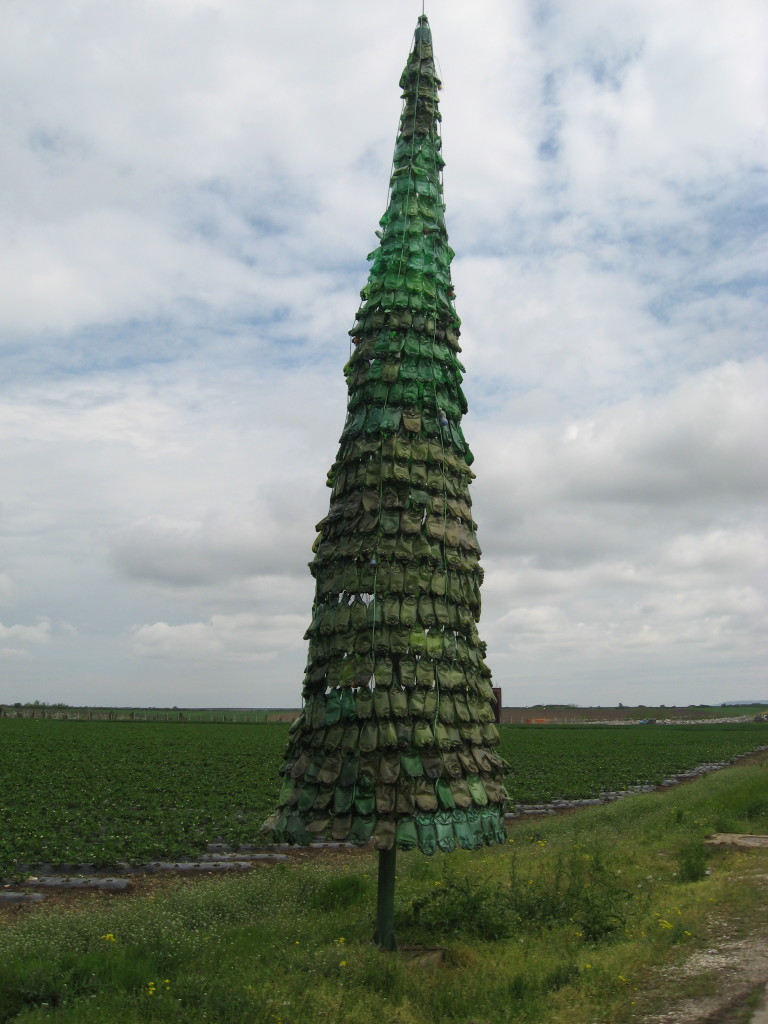 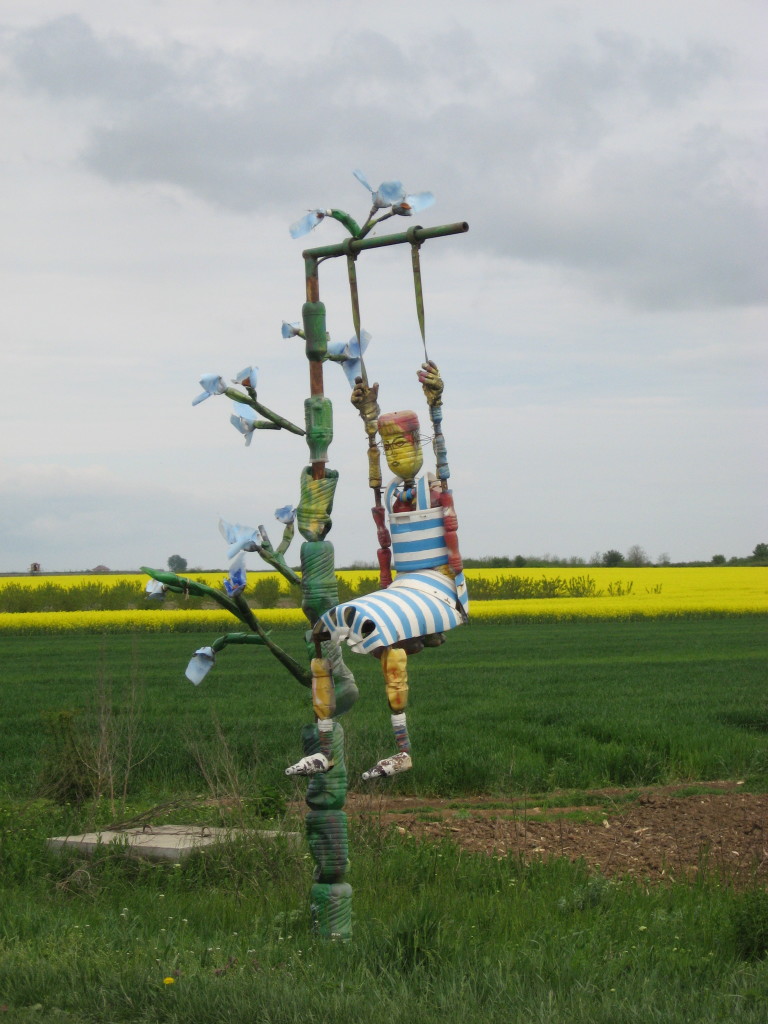 So this was just brilliant and he (or she) must have put a lot of effort in this.

But the waste problem didn’t get better. In fact it got much worse. I wrote in another post, that we ate a lot of Banitza in Bulgaria. It tastes delicious, but if you buy 4 of them you get each packed in a separate plastic bag. You buy a single postcard and you get it in a plastic bag. If you buy a postcard and a sticker (you know the flags I put on my bicycle bags), you get each in a separate plastic bag. And this stayed the same from Serbia, Romania, Bulgaria, Georgia up to Armenia. Even on the Black Sea we saw a lot of waste. By the way, did I mention that we saw dolphins on the Black Sea? They were following the ferry for quite some time.

Now what made me wonder was the funny faces we got, when we refused to take a plastic bags. We already noticed in some countries, that our way of traveling was sometimes pitied, because using a bicycle was considered something only the poor do. So I was thinking about how someone couldn’t understand why we don’t want another plastic bag. The guy at the store, where we got the sink plug actually was pretty embarrassed, when he noticed he didn’t gave me a plastic bag and hastyly held one out when I was already turning to leave the store.

I remembered a situation in Romania in 2006, when I was hiking in the Carpathian mountains. While it was cold and heavily raining I reached a shelter in the mountains just to find it full of waste. So I had to pitch my tent right next to it. A day later I had a conversation with a local woman also hiking and asked her, why they leave the waste in the mountains. I mean hikers usually enjoy the mountains and shouldn’t leave their waste there. She explained, that for a majority waste is a sign of wealth. Only a farmer, she said, has no waste. Nature does not produce waste. But you must be rich, if you can buy something you actually don’t need. It makes those people proud to throw something away and they actually want to show this.

Seeing it this way explained most reactions for me. But as I repeated twice already: You people are all the same. So now I was thinking about an analogy. A similar behavior in Germany. Because I think any behavior, no matter how strange it might appear can be found everywhere else as well.

Obviously in Germany leaving your waste everywhere is not a sign of wealth. Or is it?

I have seen people riding bicycles worth 4000 Euro, but with a rusty chain. And these bikes with full suspension, capable of going downhill over big rocks at high speed in a professional mountain bike race, have probably only been used to comfortably drive over a border stone.

A Nissan Micra here climbs up to 2025m altitude, carrying a whole family. But all the SUV drivers in Germany have probably never left the paved road.

That’s also buying something you actually don’t need. Like putting your Mercedes S class in your living room, because you need an air condition. And „having more than enough“ is in fact a way of showing wealth.

So I think you people are all the same. And don’t get me wrong, I’m not talking about „save the planet“ and „we can make a change“. It’s just an observation. Even if we change, we end up being the same again.

And I think that’s actually reassuring. Maybe „they“ are not so much different. I think throughout this journey we will only see different ways of the same. But that’s pretty amazing!

2 thoughts on “Wastelands – You people are all the same”