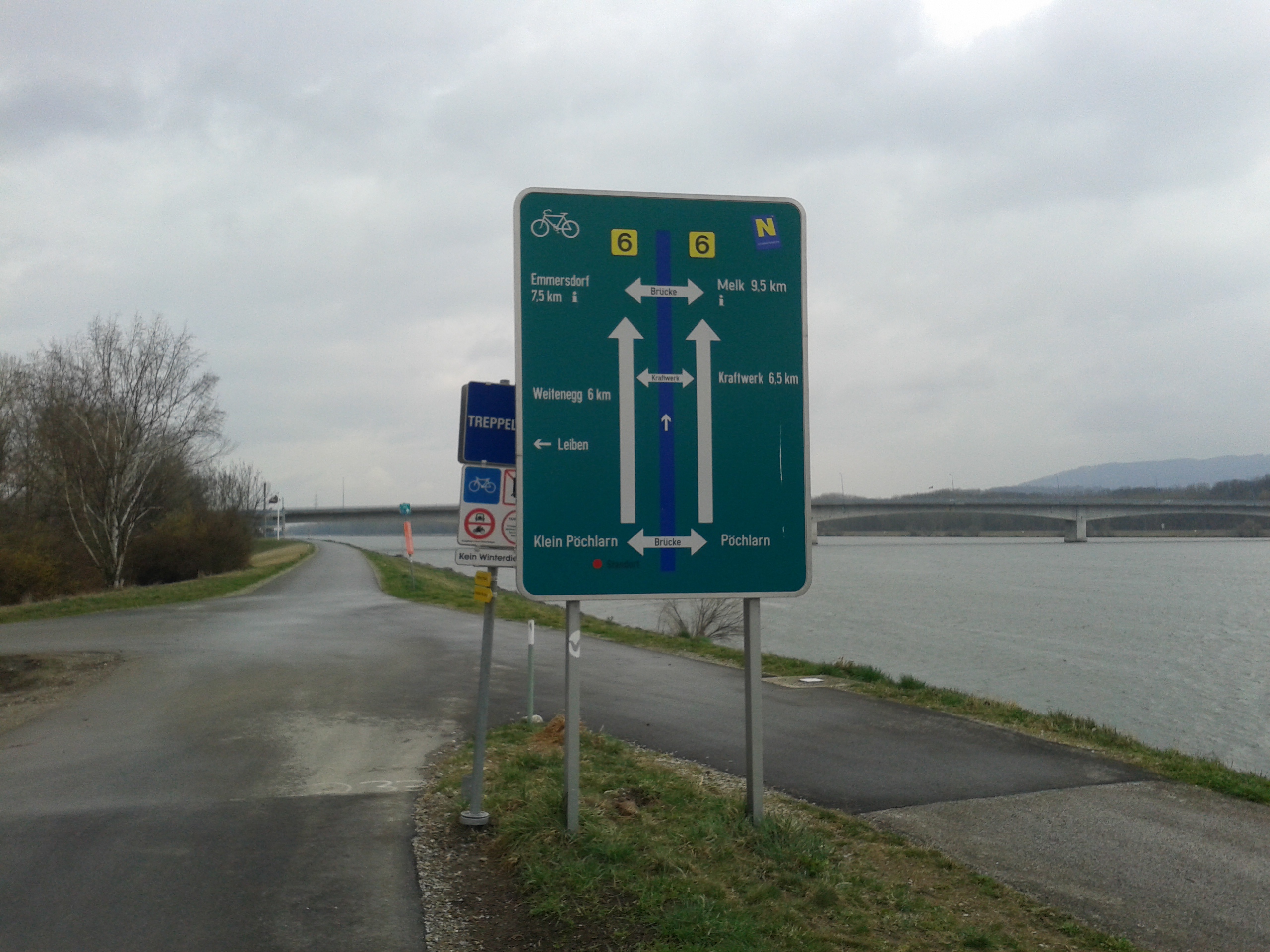 When we reached the Danube river in Ulm it was rather small. I lived in Ulm for several years and on the yearly „Nabada“-festival, when everybody is in the Danube, paddling on some kind of boat, it was always possible to stand on the riverbed. During our journey the river grew: Lech, Isar and Inn have joined, ships are running on the river and now have more often Slovakian and Hungarian flags.

Apart from the flags I also like to see the German dialect change. When we crossed the Schwäbische Alb I could understand people well and gave my best impression of a Swabian. Cora with her Frankonian background has an advantage in Bavaria and Austria. Since we are traveling rural areas people tend to talk…let’s say funny and aren’t willing or capable to change. I don’t complain, it’s just my lack of being able to decode. Anyway, I have to get used to the fact that I don’t understand everybody. We are 70km away from Slovakia.

Yes, we are already in Vienna and stay at friends of Cora until tomorrow. Then we will head towards Bratislava. Today is Sunday and I take the chance to answer emails and add some posts to the blog. We are both a bit tired after 7 days without a day of rest, but we are getting stronger quickly. From Neuburg to Regensburg we had our first 100+ km trip and now often make 40km before lunch. Our only doping so far was a Schweinshaxn and a Kaiserschmarrn.

I also have to share our experience with traveling off-season. The big upside is that there isn’t much tourism right now and we only meet other cyclists or runners close to cities. The big downside is that there isn’t much tourism right now, which means there are plenty of signs to beer gardens, guesthouses or restaurants, but following the signs often is futile. Everything is either closed completely or only open in the evening. Several times we were wandering around in the dusk to finally find a place to stay. It is still sometimes to cold to pitch the tent.

In Bavaria we also had the impression, that the cycle route was more of a beer route. The cycle signs often led us away from the Danube and instead through little villages with lots of beer gardens. Also the amount of resting benches dropped rapidly after entering Bavaria, so your only chance is to take a seat in a beer garden. Bavaria – They are doing it right!

Then finally we entered Austria. No words to describe the cycle routes. Just have a look at the huge signs. We are on the European cycle route number 6 (I call it „Highway 6“) and we can only imagine how crowded it is during summer time. I haven’t seen a single road in Germany better paved than the cycle routes in Austria. Even when going uphill it feels like going downhill. We are impressed and again happy to be off-season.

Of course there is a reason for the „highway“: The route from Regensburg to Vienna is beautiful. A lot of forest, cozy little villages, huge castles, vineyards, tasty food and lots of beer gardens. I guess in only a few weeks the apricot trees will start to blossom. The Wachau is a region most famous for their old wineries and their apricot-schnapps.

In general spring is almost there. So you can expect more colorful pictures soon.

I will finish here, since we are about to go downtown Vienna to a „Kaffeehaus“ where we were told to find square and grumpy people but tasty cakes. Welcome to Vienna.

One thought on “Panta Rhei – Literally. From Ulm to Vienna”