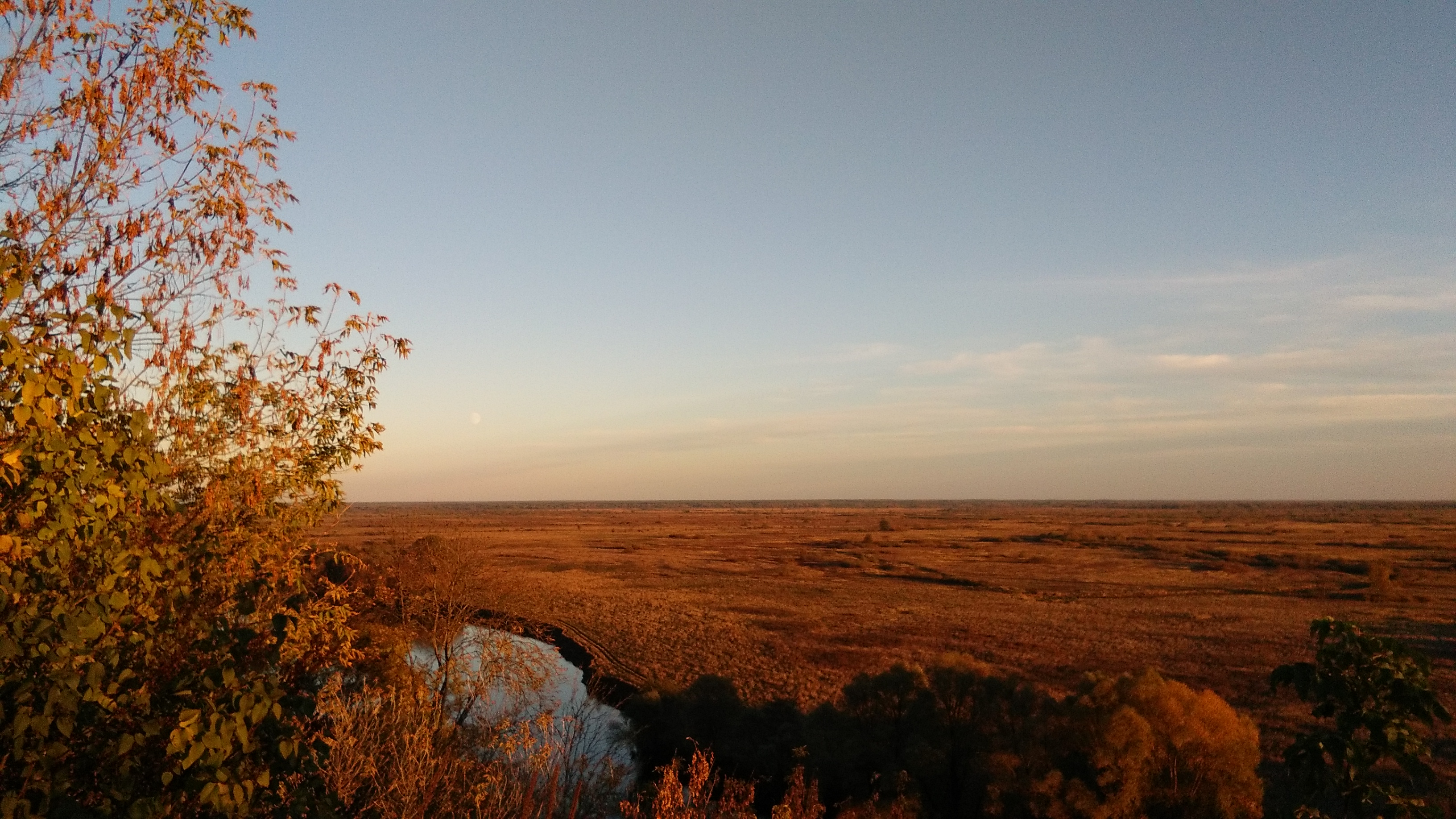 The day I leave Moscow I meet again with Oleg. He takes me to a viewing point close to the University of Moscow. The university building itself is also impressive, but it’s foggy that day. So I can only see half of it.

The humidity is high and I switch between sweating and freezing when I leave Moscow. I see a lot of road construction and the traffic is enormous until I finally reach the outskirts of the city.

In the evening the clouds get brighter and on the horizon sun comes out. I make it to Obninsk.

The next day is rainy. I visit the monastery in Malojaroslawez and then continue towards Kaluga. Kaluga is famous for its role in space exploration. Many squares show monuments of scientists and space rockets. Before it is getting dark and too cold I manage to see the Vostok rocket, the same type of rocket that has send Sputnik and Yuri Gagarin into space.

Then I move a little outside town where I found a nice family-run guesthouse. The host is incredible considerate. There are also two long-term guests, which is quite common in Russia. The host offers dinner and asks me if I want to taste his home made vodka.

There’s an old saying in Tennessee — I know it’s in Texas, probably in Tennessee — that says, fool me once, shame on — shame on you. Fool me — you can’t get fooled again.

You see, I think I only had a hangover once on the entire journey and that was in Irkutsk. When it comes to weapons of mass destruction, the most dangerous there is in Russia is certainly vodka.

I agree to try one small glass of vodka and already have a beer on the table to make it clear how I will continue. It all doesn’t help. The beer is empty soon, but he prepares more and more to eat and it’s all delicious and once in a while we drink a vodka. When I go to bed at 2 am I don’t feel drunk, even though there are 4 empty bottles of vodka standing around (500ml each). I even read some articles in a German newspaper before I actually sleep.

The next morning is terrible. I feel sick and unable to cycle. I wait until 2 pm before I finally feel good enough to push the pedals.

I get a bottle of home made vodka as a present and leave. The fresh air helps a lot and soon the last bit of alcohol has left my body, while Anatoli already had some beers again in the morning. My goal is Optina Pustyn, one of the biggest tourist attractions in this region. It’s a monastery. To be honest it is more interesting for pilgrims and that’s what I see a lot here. Very orthodox people. However, I especially enjoy the monastery’s kitchen. They offer a lot of hand made food and also brew their own Kvas. Kvas is a non-alcoholic drink (it may have around 1% alcohol) made from fermented bread. I personally like it a lot, but there are huge differences. This one is great. I sleep in the monastery’s guesthouse. The shower however, doesn’t work. That’s bad. Jesus is also not amused.

The days are getting colder and colder. I am heading into the Ugra National Park and maybe have to pitch the tent. Right now I really try to avoid that. Not only are the nights cold, it is also still humid, foggy and rainy. And the guest houses are so cheap.

I enjoy the landscape. It is flat, but whenever there is a little hill I can see endless forest plains and colorful leaves. Villages and houses are very similar to Siberia. It often reminds me on Scandinavian countries. Usually only the cars still have this typical soviet style. Houses are wooden and often with beautiful carvings.

I cycle into the National Park. I feel warm, but my fingers and feet hurt a lot and don’t get warm. I have my first doubts if I can make it to Germany. Even in Siberia it was warmer. I can just hope the temperatures will go up soon.

The National Park is nice. In general Russia has a lot of wild rivers even in the cities. No riverbank stabilization. Swamps, grass and trees standing in the water. I like it a lot. It would be great to have lunch there, sitting on the river bank with the feet in the water. If only it was a little warmer.

10 km into the National Park I get stopped. Several tanks are blocking the road and some soldiers tell me I have to turn around. Oh great. Then 10 minutes later the rear tire bursts. I try to put on the one I bought in Ulan Bator, but it is a little thinner and with the cold fingers I struggle. Anyway, after half an hour I can continue.

The road gets muddy while I cycle through small villages and cross beautiful rivers once in a while.

In the evening I meet four guys from Azerbaijan and ask them for a guest house. It’s 34 km away they say. I decide to go there, even if I arrive at night. It is so cold I cannot imagine pitching the tent. I push the pedals and finally arrive in Khvastovichi, but there is no guest house. I knock on some doors. Finally I meet a guy on the street and ask him where I can stay. He first offers to stay in the office rooms of the company he’s working for. Soon he returns with some colleagues and I get interviewed. The Russians are sometimes leery. A dry sense of humor seems to work best to break the ice. Soon he changes mind and invites me home, because his little daughter wants to get to know me, too.

I leave early the next day, when everybody goes to work. It’s cold, but the clouds are gone. Sun rises and soon I can have a break with the sun shining in my face. These moments are always special: When nature just switches from being your enemy to being your friend. When I arrive in Bryansk I find a cycle shop. The shop owner is just overwhelmed. He offers a lot of things and says I can take everything for free. Thanks, but I only need a tire.

Then it’s time for the Автомоика. That’s the car wash, but of course it also works for bicycles. All fresh and clean I go to the guest house and relax the whole afternoon.

The next two days are rather sunny, but still very cold. Along the road I always find babushkas selling hot corncobs or apples. I like that a lot. Also in Russia you find many specialized shops that sell pastry, cakes or dried fruits.

I’m approaching the border to Ukraine. I always like border areas. They have a very special atmosphere. Less and less traffic. Then the first cars with Ukrainian number plates drive towards me. Finally no villages, only a straight road and then there is the border control.

However, I admit I am a bit concerned about the many tanks and soldiers. I even got stopped by soldiers a few kilometers from the border, asked for my route and told to stick to it and not to leave the main road. We have seen many conflict zones with soldiers: In Armenia, Central Asia, India, Nepal, Myanmar and Laos. But this here is a different story. That’s not some dudes with rifles. That’s tanks and rocket launchers. I hope Russia and Ukraine figure out a peaceful way, because this is all too powerful to get out of control.

Anyway, I make it to the border in time. I even have one day left. They take my departure card and when they see I’m German, they say „Schneller!“ and „Hände hoch!“. That’s what we heard several times in ex-soviet countries.

The Ukrainian customs is like in Uzbekistan. I have to show EVERYTHING I have in my bags. That takes long, but gives me the opportunity to throw away some things I don’t need any more.

The bag of sand from the Pacific Ocean in Japan is especially suspicious. But finally I can enter Ukraine, however, it is already late. The next city is roughly 50km away. Great.

Russia is over. I have crossed more than 7000 km in 30 days while staying in the same country all the time. I especially enjoyed the food, the people, the language and to a certain extend also the cold.

Fool me once, shame on you!

Fool me twice, shame on me!

(An old saying from Texas or Tennessee)