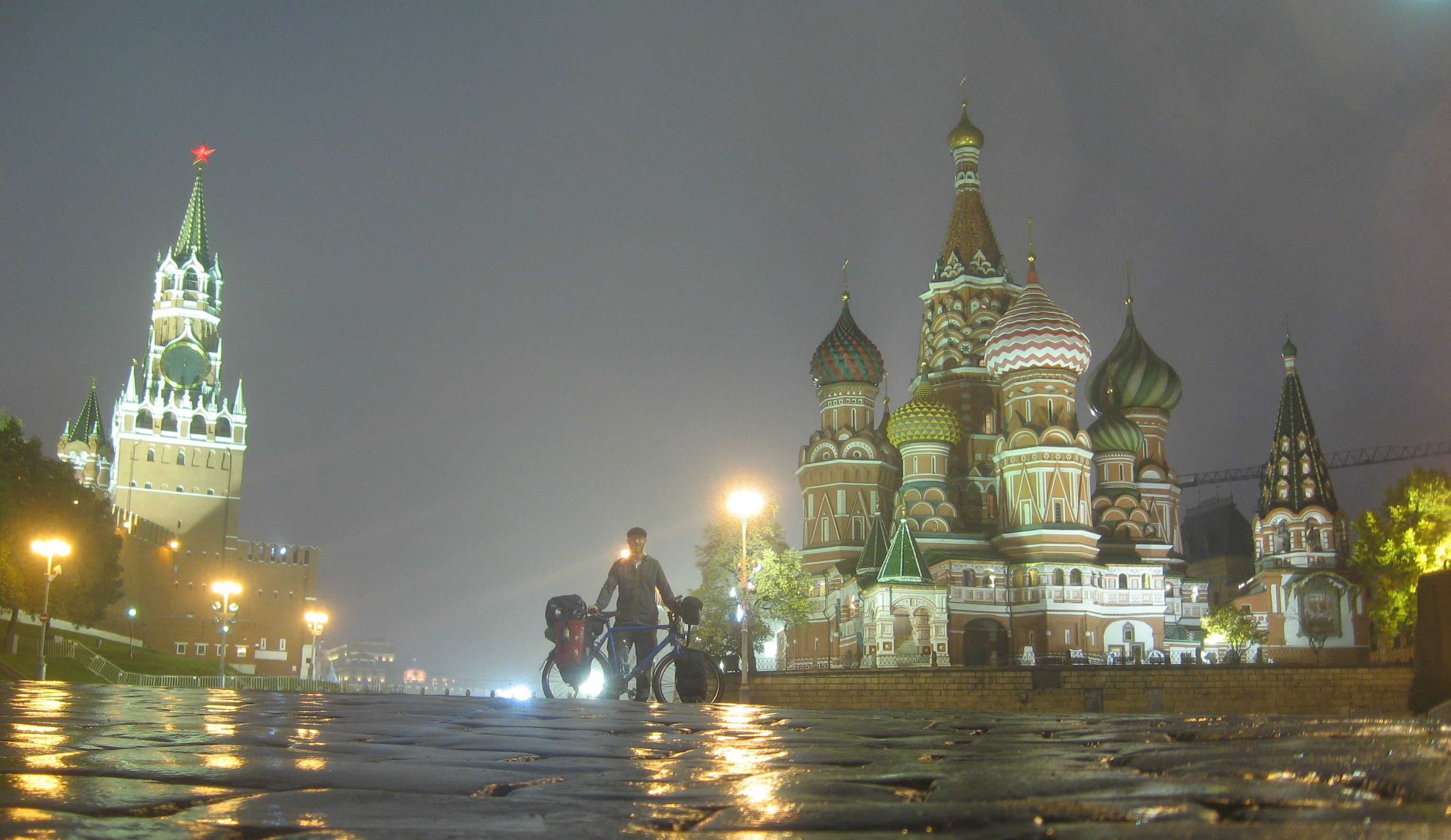 Traveling on the Transsiberian Railway takes some preparation. You have to bring your own food for a few days unless you want to spend your money in the overprized train restaurant. So me and Tom go shopping for all kinds of instant food. Besides Chinese instant noodles the Russians also have instant mashed potatoes with all kinds of vegetables and stuff.

We make it to the platform just in time, because there are a lot of stairs and because of the photo session above. I also have to remove the wheels. But finally all panniers and the bicycle are in the train.

The door closes and the train starts to move. I’m a bit nervous, because I don’t know, what kind of compartment mates I will have. No need to worry, though. Micha, Natasha and Inna are fantastic. They had to work east of lake Baikal and are on their way back home. Relaxed people and even better prepared than me. The table is full with candy, bread, vegetables and a whole grilled chicken. Micha also got some beer.

Soon it’s like on a school trip. There is not much to do and the neighboring compartments are also full of people. In general, there are not many tourists on the train. That’s because the season is over. The Russians usually take the train, because it is cheaper than flying. Some also just take the train to the next bigger city (which can be 36 hours train ride away) and take the plane there.

The Russians of course are very well prepared for the trip. Some have meter long cables, so they can watch movies on the notebook. There are only 4 outlets in the aisle of the car. The women are particularly funny, because – like everybody on the train – they run around in pajamas. However, when there is a stop at a train station, they get completely dressed, put makeup on and wear high heels, just to smoke a cigarette on the platform. Some Siberian elk hunter could see them in their pajamas….it doesn’t bear contemplating.

The landscape doesn’t change much. It’s hours and days of passing birch trees and little villages. Of course it is not possible to cycle through Russia on a 30 day visa, but it probably also gets a little bit boring after a few weeks. So taking the train is a good idea.

The highlight inside the train is the water kettle. It runs on coal and there is one in every car. People go there to prepare tea and coffee or one of their instant meals.

After „only“ 36 hours my compartment mates already leave in Taiga, a little town somewhere. After that I am alone in the compartment and go to sleep. When I wake up, there is a woman with a dog and two heavy guys. The woman leaves soon the next day, the guys leave in the evening somewhere between Omsk and Yekaterinburg. In Yekaterinburg is a 55 min break. Of course I take the chance to walk around a bit. It’s strange to leave all your stuff in the train and walk out of the station. But it’s worthwhile. I can catch a glimpse of this beautiful city, which already has a very metropolitan atmosphere.

When I return another guy is in the compartment. I go to bed. When I wake up, he is gone, but a mother and her son are sleeping in the beds below me. When they wake up we talk a bit and they are very interested in my travel pictures. They zoom in on every detail. What fruits are there on the market in India? What flowers do they have on their head in Myanmar? What is in the display of the shop in Iran? And look at the beard of this guy in Kathmandu! It takes hours, but I enjoy every minute. They „travel“ through all countries with me.

The last night is short. At 3 am the light is turned on in the train. At 4:11 am we arrive in Moscow. My bicycle, the panniers, everything is ok. I reassemble the bike and enter Moscow.

There are not many people or cars on the streets. I have breakfast at McDonalds, then move towards the Red Square. I like how these two facts somehow don’t fit. The GPS makes a beep: No satellite connection. I move around the Kremlin. Apart from a few soldiers, there is nobody. It’s 6 am when I reach the St. Basil Cathedral.

The Red Square is closed at night, so I head towards the hostel. It should be only 300 m from the Kremlin, but the GPS shows 24 km. Apparently the GPS signal gets disturbed around the Kremlin, so you cannot send a missile there. The funny part, though, is that the signal is altered in such a way, that it now tells me I am at the Moscow airport. What’s their intention? To redirect planes into the Kremlin?

Anyway, I find the hostel. It’s great. That’s something I miss in Central Europe. I mean we’ve spent a night in the hostel in Krems (Austria) for example. It was 17 Euro per person and was as cozy as a North Korean prison cell. Now here in Moscow, 300 m from the Kremlin in a hostel that feels like a shared flat, with a kitchen, free tea and coffee, free washing machine, two modern bathrooms and nice colors on the walls you pay 9 Euro per night and you don’t have to endure the staff talking all the time instead of working. Cheap accommodation is something great. Especially when you cycle, because I usually arrive late and leave early. I don’t need fancy gimmicks. I need a shower and a bed. Wi-Fi is also nice. I’m willing to pay more for a good location.

By the way, I got a message from Tom. It’s now snowing in Irkutsk. What a pity. I left four days too early. Tom also has friends here in Moscow: I spend two evenings with Alexa and Oleg. I love when locals show me around. It’s so much more relaxed then reading travel guides and following maps.

Moscow at daytime is busy. The Kremlin is like an airport. Every few minutes a huge helicopter is approaching it. You know, one of these helicopters with side windows like on an airplane and room for 20 people. And I hear sirens all the time. Then usually a convoy passes me. Several police cars and in between a stretch limousine with some V.I.P.. Even though the Kremlin is just in the center of Moscow it feels far away. Walls, helicopters, police guarded convoys. The power is hiding, flying above you or protected from you. In Germany you can watch the political debates live inside the Reichstagsgebäude. Its dome of glass represents a transparent system. Some will disagree of course. After all we are allowed to disagree.

The air is bad. Traffic jams everywhere. But of course no-one uses a bicycle. I have seen that so often: In Sofia, Tehran, Seoul, Ulan Bator and now here again. It’s a cultural thing. Bicycles represent poverty in these places. It’s important to spend half a day in traffic jam and honk at each other, so people know you can afford that. But here in Moscow people also don’t care about their cars. They are all dirty. In Germany someone wrote „Putz mich!“ („wash me!“) on your dirt stained rear window. You see how I start complaining and comparing? In Central Asia or India dirty cars were wild. Here they are a lack of discipline. Russia can do better.

The Ladas are gone. There are a lot of high class German cars, even more than in China. Not only because of that, but also because of its architecture, Moscow has a very European center. In general, the area around the Kremlin is absolutely stunning.

I follow the Moskva down to Gorki Park  listening to the wind of change. And I visit the Biblioteka Imeni Lenina with a big statue of Dostoyevsky in front of it.

But something else catches my attention and is a true sign I have left Asia: Japanese, Korean and Chinese tourists in big groups and with a busy schedule. My feeling of being a stranger slowly fades away. They are now the tourists more than I am.

I realize how I start to think more about Germany and less about what surrounds me. One reason for sure is the fact, that more and more things look familiar and therefore don’t catch that much attention any more. But of course I also already prepare for my return to Germany. I try to fight it, because it is never a good idea to think about a goal instead of staying in the moment. But I will lose that fight. And at a certain point I also have to.

The last part of this journey will take me through western Russia, Ukraine, Poland and Czech Republic from where I enter Germany. I will visit a lot of beautiful old cities and my European view on the surrounding world will steadily become a view on my own culture and identity.

I will leave Moscow tomorrow to meet my last deadline on October the 15th. That’s when the Russian visa expires.