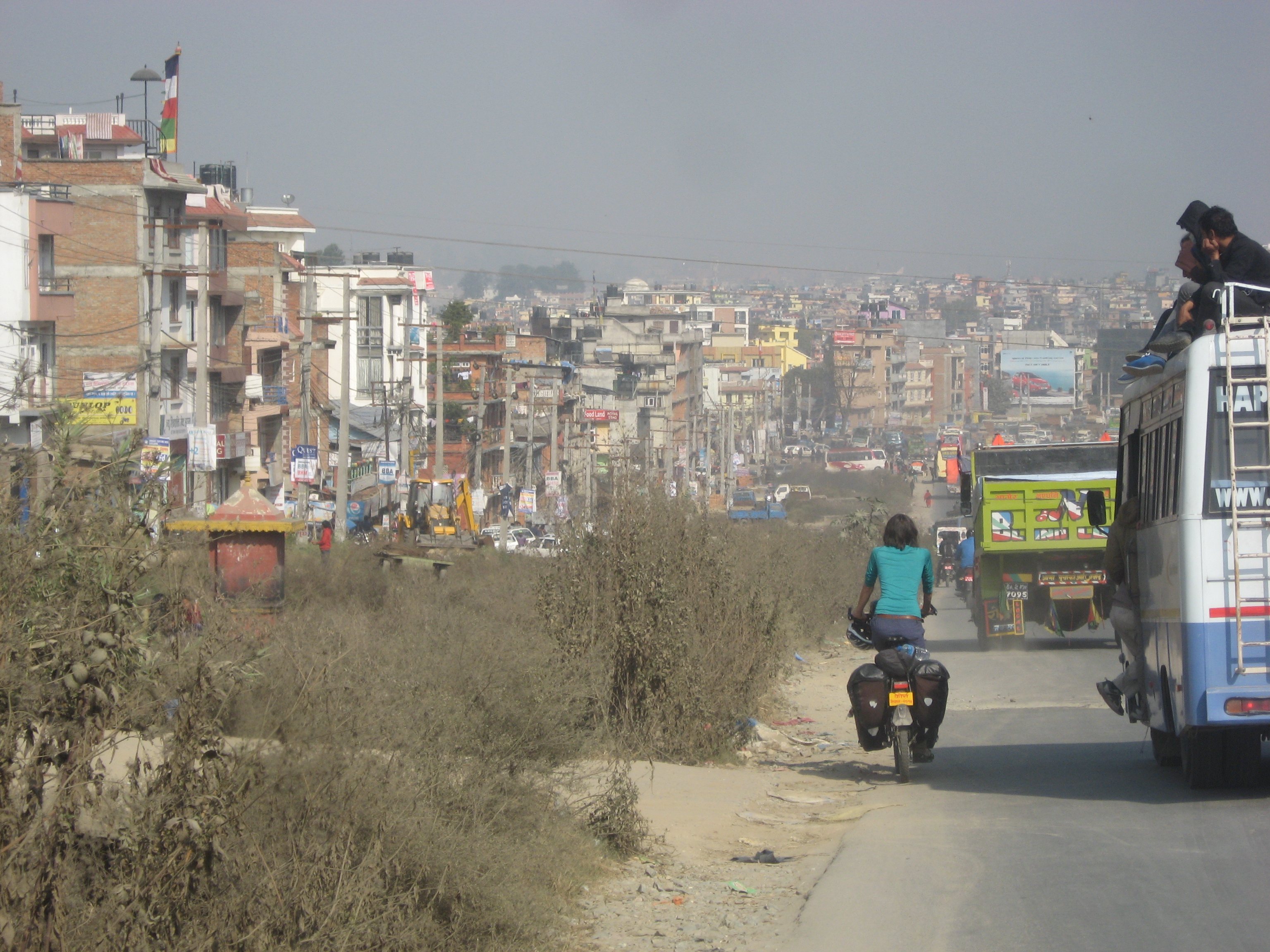 Staying at Madhukar’s place is the right thing after the Annapurna Circuit. Madhukar is a great warmshower host who also runs a little restaurant. He is a true cyclist and organizes lots of cycling tours in and around Kathmandu to raise money for an orphan home.

Since he lives a bit outside the city center, we also escape the touristic hassle in Thamel, but are still close enough to quickly cycle to the next German Bakery to get some cheese cake.

We have to replace the brake pads, because they are completely gone. The road was very sandy on the Circuit and we crossed a lot of small creeks. A bad mixture. I have never seen almost new brake pads gone within 70km. And I mean totally gone. From Muktinath to Pokhara we could both only use the front brake, the rear brakes were metal on metal.

On Monday we leave Madhukar and first head to the embassy of Myanmar. Max got his visa on the spot, but the guy at the embassy now tells us, that it always takes two days. Smells like dude spirit. And that’s bad news, because we have only 8 days left on the visa and need time to leave Nepal. So Cora gives her best impression of a drama queen and I try to play the role of the good cop in a „good cop – bad cop“ interrogation. It works. We get him down to „OK, come tomorrow. 2pm.“

So we spend another night in Kathmandu. The next morning we dodge countless guys selling tiger balm a last time and again cycle to the visa section of the embassy of the Republic of the Union of Myanmar, while the sound of „om mani peme hung“ coming from every second tourist shop slowly fades away. We arrive at the embassy at 11am and get the visa.

We can finally leave Kathmandu with 6 days left on the visa. It takes a long time until we reach the edge of the noisy city and the road starts to get less busy.

Recently I read in a German book that happened to lay around in a small lodge on the Annapurna Circuit. It was about this study, in which they found out, that no matter what happens in your life, around six month to a year later you feel equally happy as you did before. No matter if you get a leg amputated or win the lottery. After a year you feel more or less the same. There are, however, some things that make your life miserable and you won’t get used to them. Two things mentioned in the book I remember in particular: Noise and commute.

Now either 1.1 billion people have a really miserable life or the Indian and Nepali people somehow found a way to deal with this. Because 90% of their life consists of noise and commute. Cora already wrote about her road rage. Apparently I am a calmer kind of person, but this ended in India. It is unbearable! Every guy on a motorcycle starts to blow the horn when he is still 100m away and continues to blow it until he has passed us by another 50m. You cannot have a conversation on the side of the road, because you get interrupted every few seconds by a horn. Of course there are also cars and trucks with way more deafening horns.

Usually I consider poverty the lack of something, but too much of something you cannot get used to can be equally painful.

We make it to Dhudikhel the first day. Cora makes it even further, because at the intersection in Dhudikhel we actually manage to lose each other and unfortunately after that intersection there is a downhill of roughly 15km. Within seconds Cora is gone. When she reads my text messages she is already at the foot of the mountain. She cycles all the way back and finally arrives – again – in Dhudikhel an hour after sunset.

The next day we make it to the foot of the last mountains that separate us from the Terai. It is getting dark and we ask at „hotel Eva“. They tell us, that they have no room, but that there is another hotel around 6km away. Too far for that day, especially because we can already see another steep climb in between. So we ask if we can maybe just sleep on the floor or pitch the tent behind the house. They then offer us a room after telling us again and again how simple and bad it is. Actually it is pretty ok.

One thing we noticed already in India is the lack of pride. A lot of Indians and also Nepali behave strangely submissive. It sometimes feels really unpleasant for us. It starts when they always add „Sir“ or „Madam“ to every sentence, but it often feels like they expect orders. It is again only a guess, but for me this seems to be remains of colonialism. And in India and Nepal the people are still treated like second class citizens in their own country. Of course maybe also the caste system plays an additional role.

But in Delhi, and also in Kathmandu you have these districts where only expats live. They have their huge villas with house maids, nanny and often a guard. Everything fenced in. You will seldom find an Indian/Nepali live there. Then of course cities like Pokhara: Shops, restaurants, bars and a whole nightlife only for well-paying tourists, while the Nepali live outside, actually away from the beautiful lake – their lake. And while some seem to be pretty annoyed by the tourists, a lot still think that they even have to obey them. I mean it is one thing to serve a customer, but a totally different thing to treat him like a golden god. Of course all the Europeans being 20cm taller than the Nepali adds up to this feeling of hierarchy. The Europeans stand out like giants, really, the difference is enormous.

So it took us a while to figure out we have to ask several times for something to eat or a room to stay. Especially in non-touristic areas. Because usually they expect us to ask for western standards and often seem to be embarrassed, because they cannot provide it. This is very sad. Compare this to a proud Kyrgyz shepherd, who invites you into his simple yurt to offer you bread, yak butter and yoghurt. In the end the Nepali often seem less hospitable, while they actually just falsely assume they have nothing to offer.

The next day we cycle uphill on a perfect road towards our last pass in Nepal. The road winds up a very steep hill in endless hairpin bends. 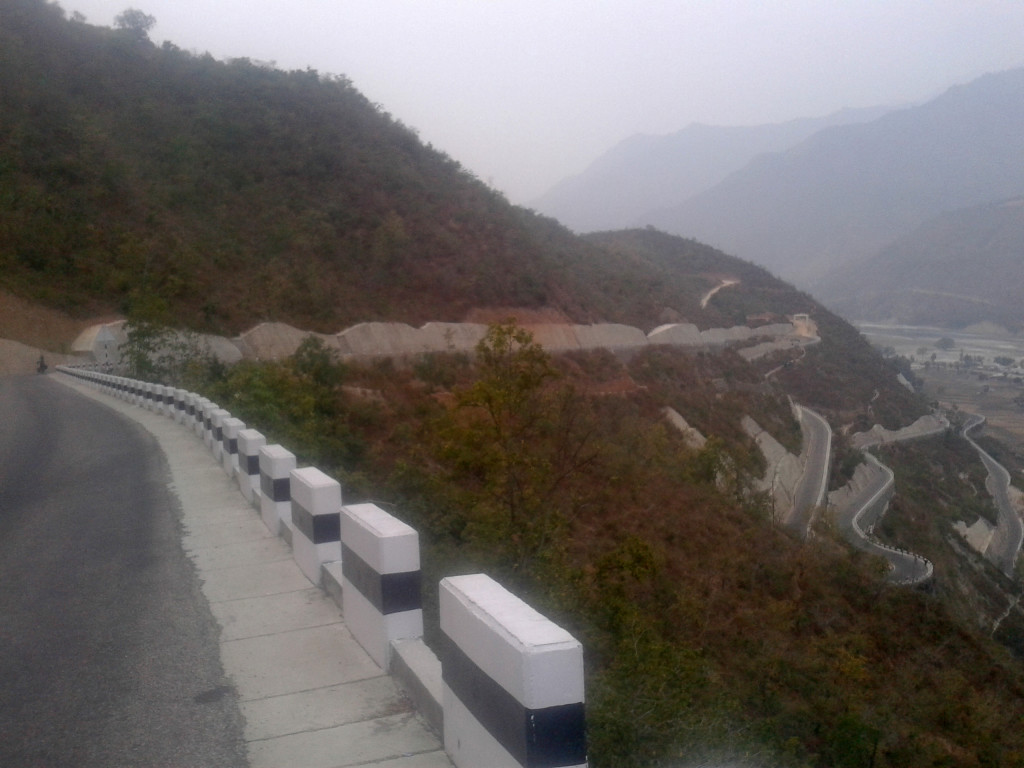 After rolling down on the other side of the mountain we stay another night in this jungle paradise before we continue along a river to the main road through the Terai.

Stop and stare
You start to wonder why you’re here not there
And you’d give anything to get what’s fair
But fair ain’t what you really need
Oh, can you see what I see?

One Republic – stop and stare

By now you should know what „Dudes“ are. And above I introduced you to „Honky Kongs“. Another annoying species are the „Staredevils“. I never thought One Republic could one day save me from going insane, but without their song playing in my head whenever a bunch of people are staring at us, I would probably lose my temper. Down in the Terai the number of Staredevils increases to a point that is hard to handle.

We have lunch somewhere and people are surrounding us. One guy comes as close as a dentist trying to examine teeth. Others play around with our cycles, but all of them stare. The few capable of speaking English grab a chair sit next to us and interview us like in a police interrogation:

Even staff in „guesthouses“ can’t hold themselves back. Two guys just stand next to me staring while I am washing myself at a well in the backyard. I ask them: „Is there any problem?“. They reply: „No Sir! No problem!“. Then they keep staring until I firmly tell them to push off. Of course raising my voice is terribly funny for them. Anyway, laughing and giggling they finally leave.

I am a bit scared of returning to India. After all, Nepal is still little populated compared to India. But even with the help of One Republic we both have a hard time with the Honky Kongs and Staredevils.

Anyway, the Terai is flat and we cycle long distances every day. We once leave the main road and cycle through very simple villages. People are also staring, but not as intrusive as the Staredevils. They just look like they have seen a ghost.

Some impressions from the Terai: 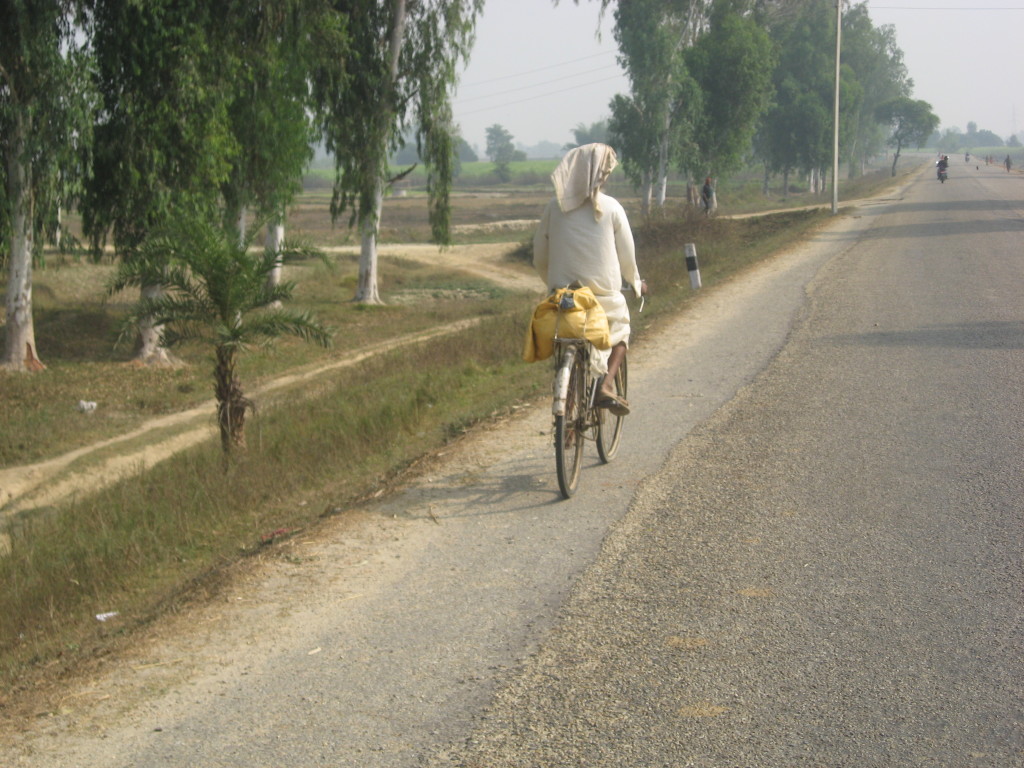 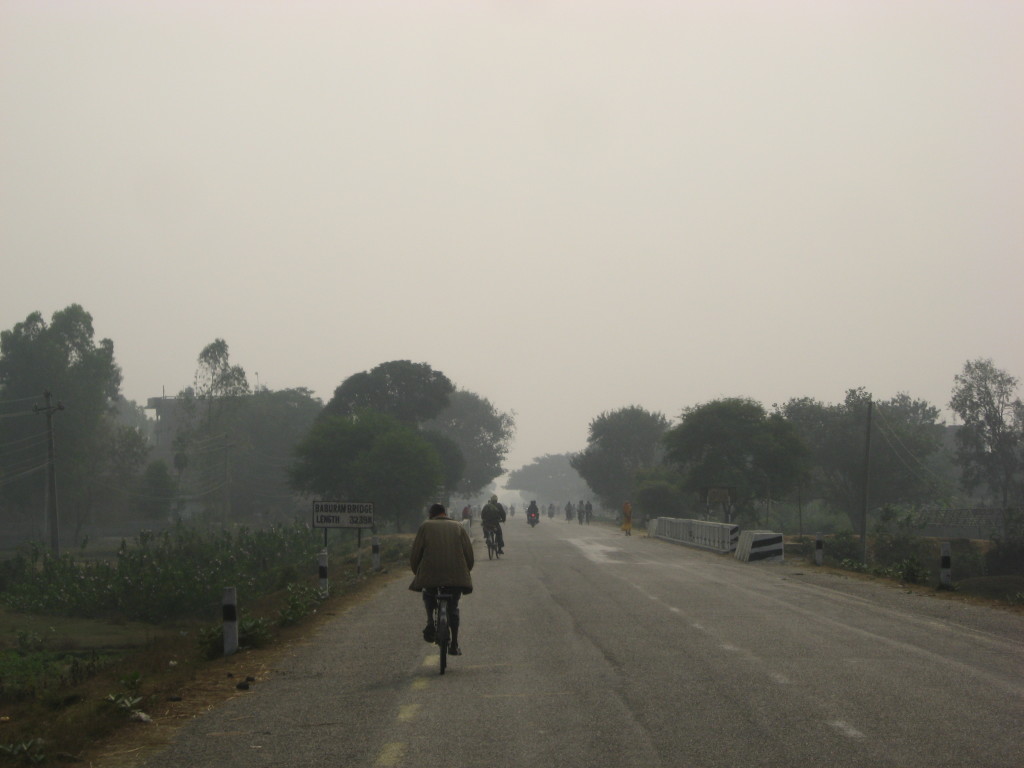 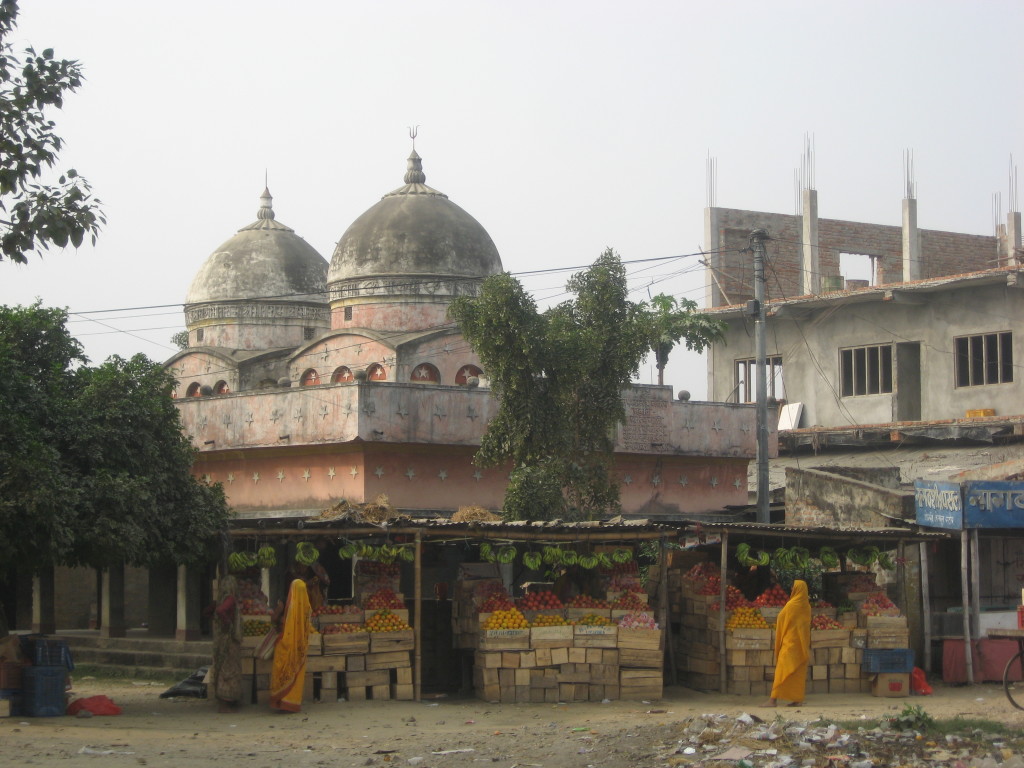 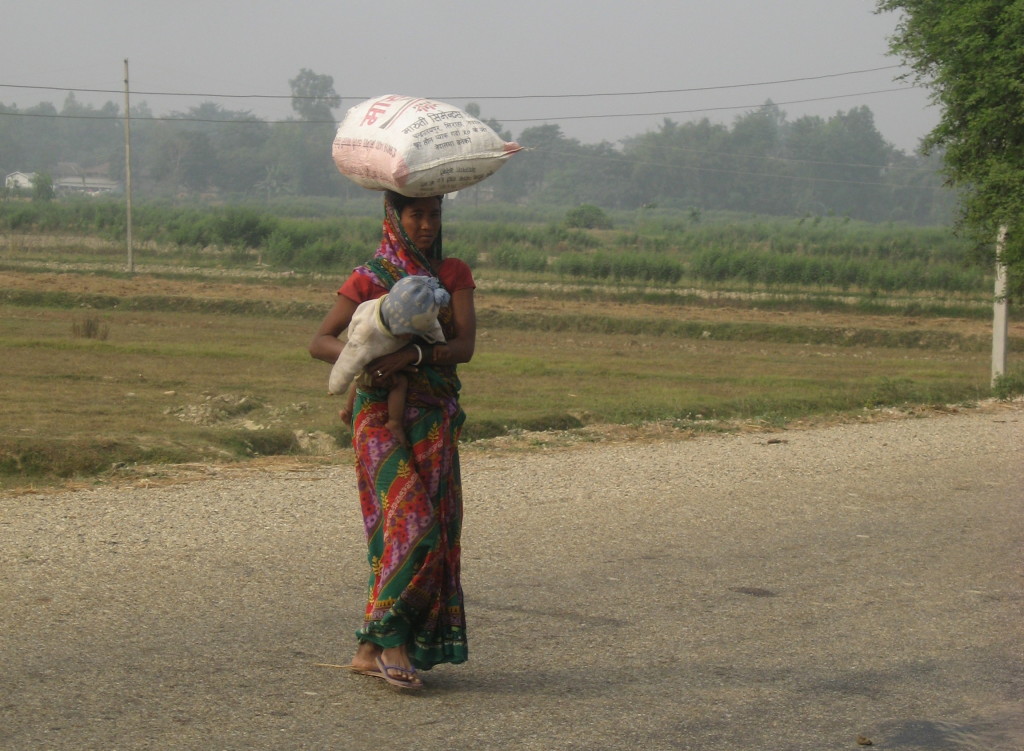 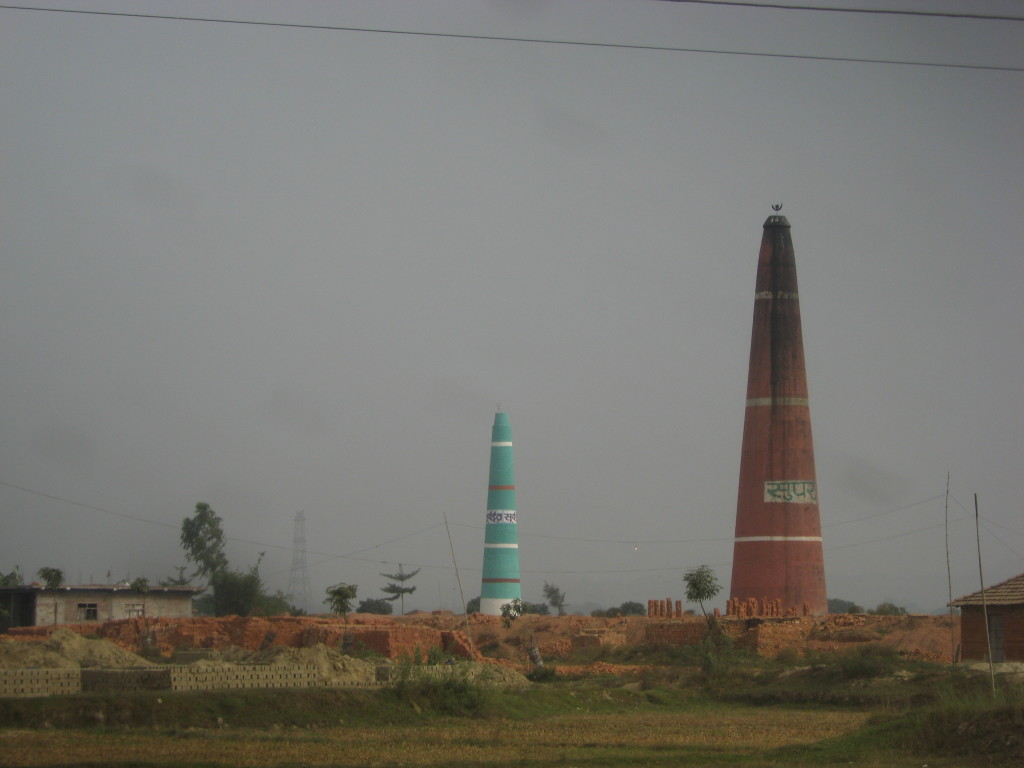 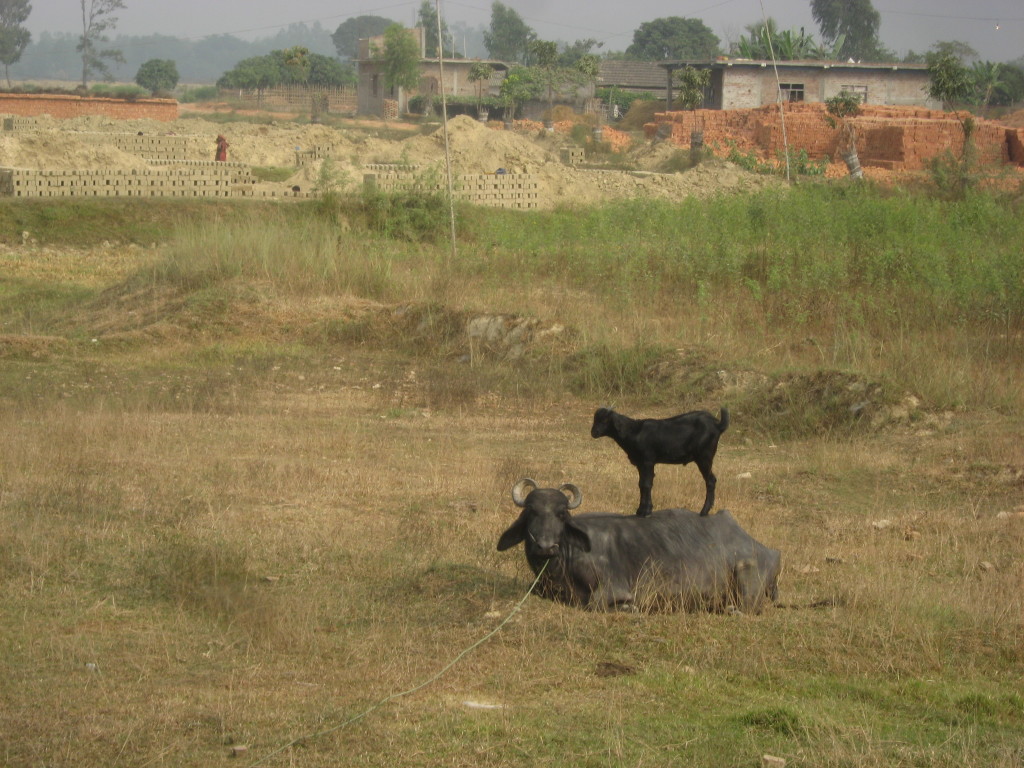 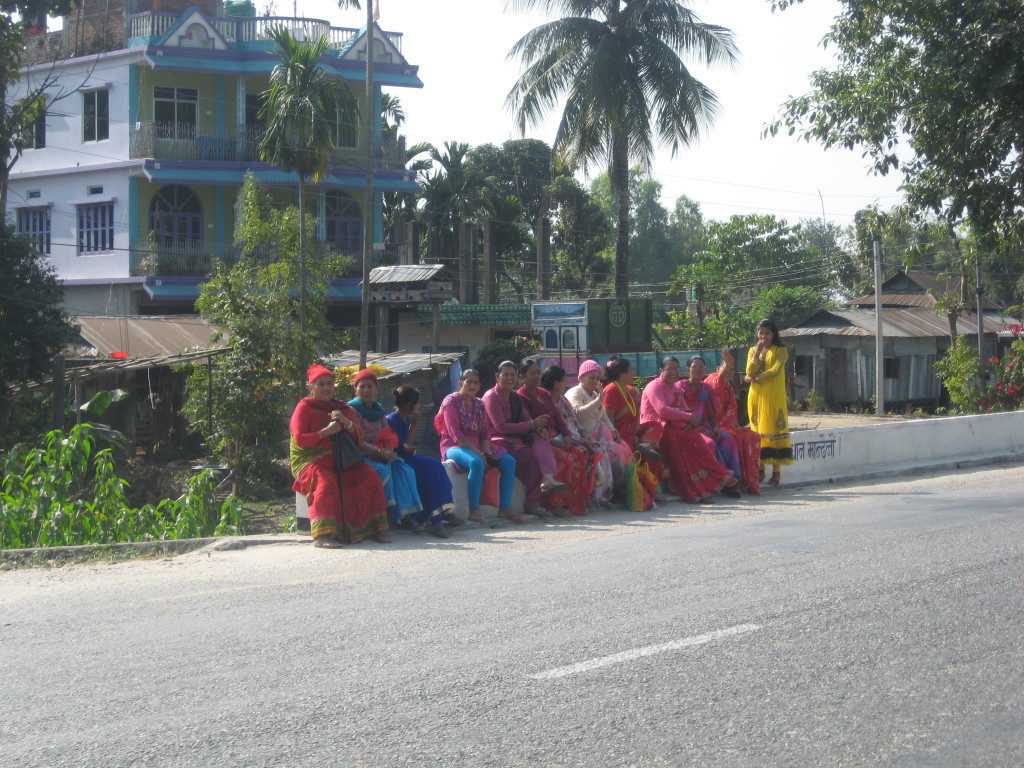 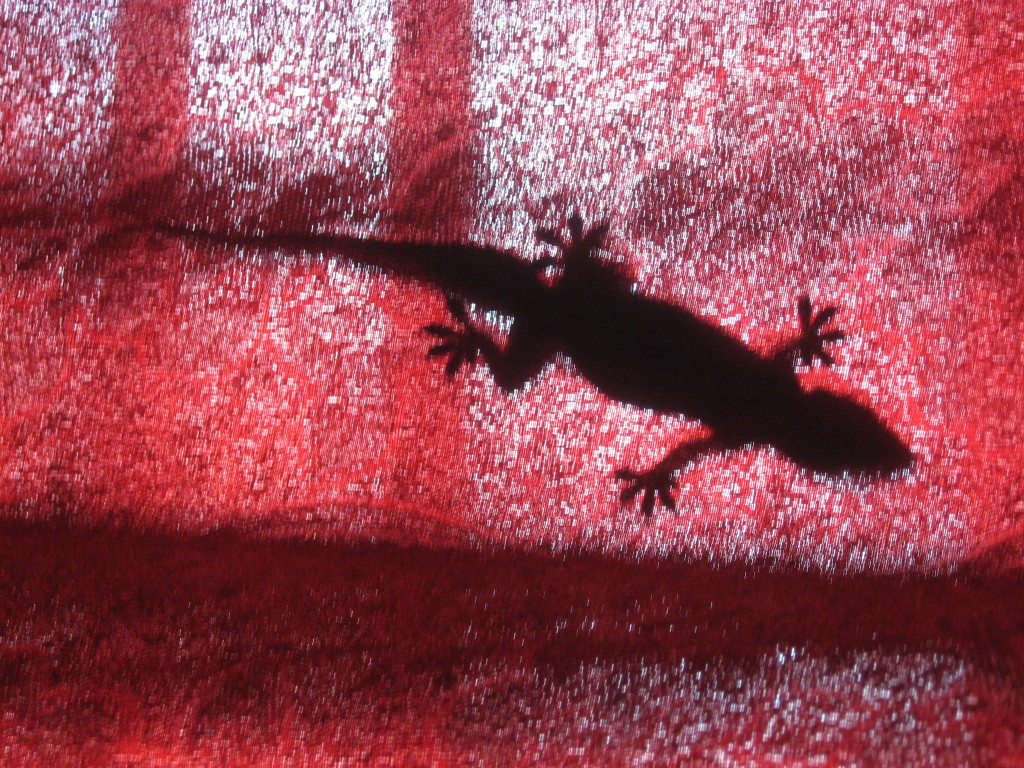 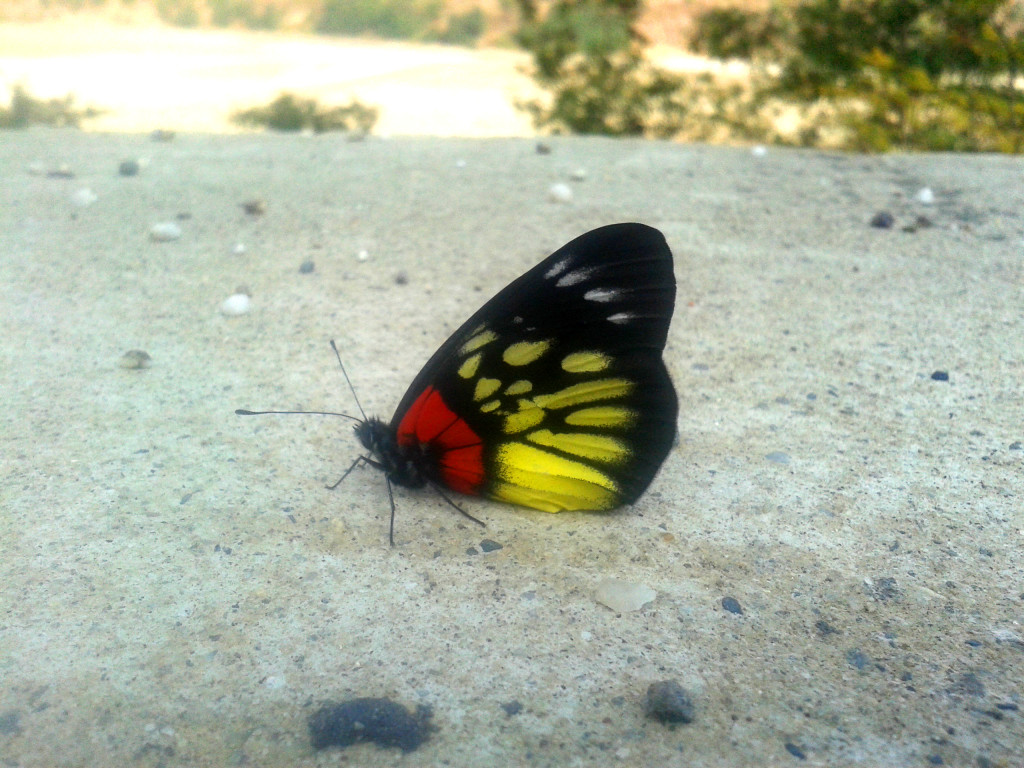 We are approaching the border to India. Our last night in Nepal we spend in Damak, where we find a very nice hotel with free room service and a pretty good chef.

The next day we make it to the border, get our exit stamp and cross into India. Soon we get sucked into the masses of Honky Kongs and the typical Indian traffic.

We liked the time in Nepal, although it was often overshadowed by Honky Kongs and Staredevils. We found very hospitable people like Madhukar in Kathmandu and lots of hosts in the lodges along Annapurna Circuit. We had challenging days way up in the Annapurna Himal and enjoyed the jungle in the Terai as well as in the area between Kathmandu and the main road. Dal Bhat quickly became our favorite dish, but we are also happy to get back to Indian food now.

Nepal was a country with three faces: A touristic face with easy life atmosphere, great bars, cheap shops and fast Wifi. A colonial face with submissive staff, free room service and king size beds all for the same price as 6m² of grass on a German camping place. And a genuine face that was most visible in the Terai, with humble – but competitive – people, colorful houses and busy roads.

Nepal tries to survive between giants like China and India, overrun by an increasing number of western tourists. Unlike most parts of Central Asia, Nepal is not stubborn towards international help. Countless signs of international development funds give proof of that. And even after terrible earthquakes and landslides, Nepal seems to rise again and again. One symbol proofs this ability more than anything else. The metal poles that tower every house reaching for higher grounds.

Good bye Nepal, you unexpected little piece of land that kept us longer than any other country before. From the subtropical jungle to the highest mountains of the world. It was a fantastic ride.