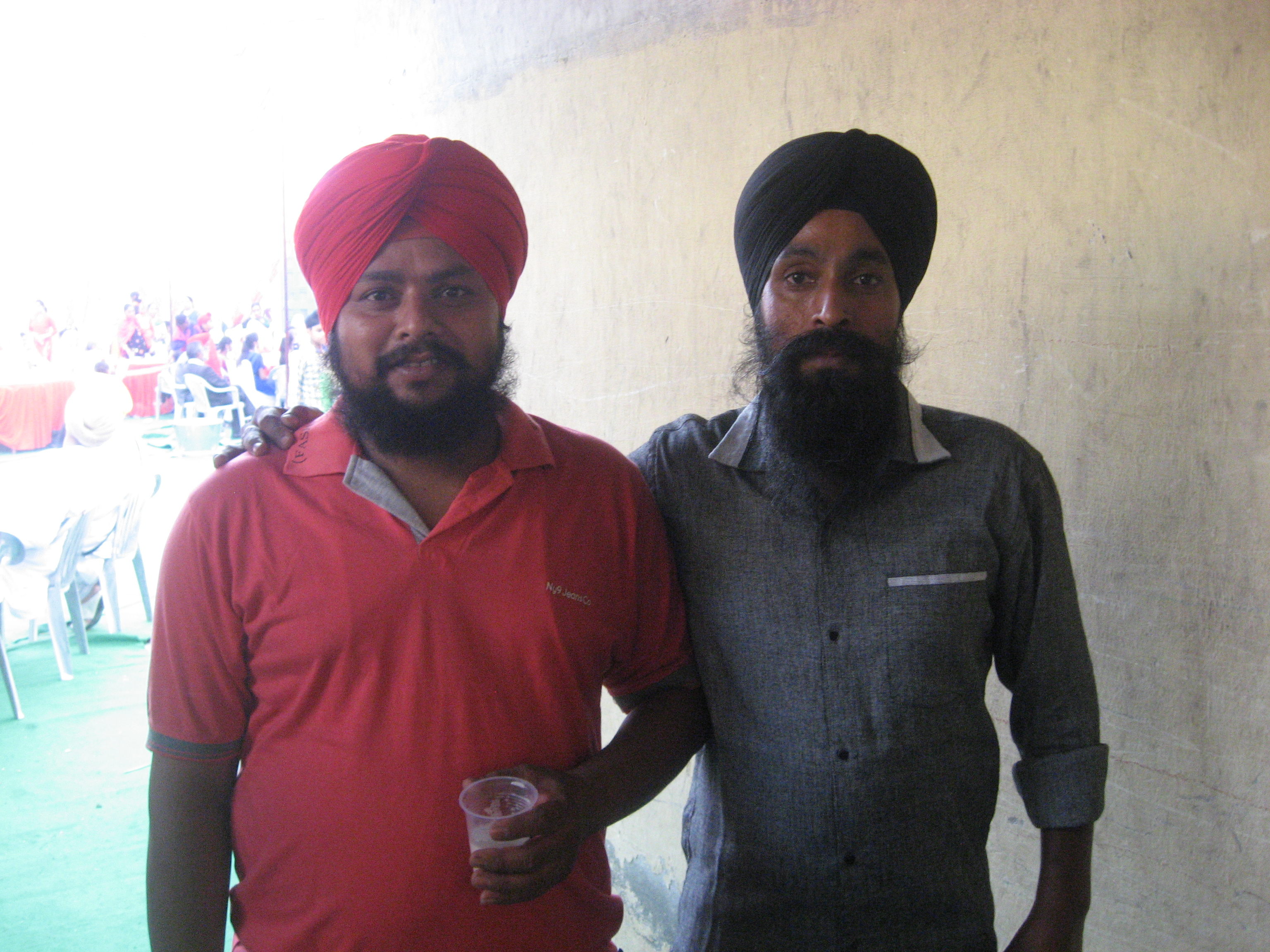 We leave Delhi after spending four nights at our warmshower hosts Friede and Rod with their two little sons. We cycle through the city for hours. Somewhere Delhi ends, but we don’t notice it. Everything stays the same. Traffic, noise, honking, people, people, people. We pass a huge dump side which looks almost like a mountain with thousands of eagles soaring in the air above. It is an unreal image: The waste of civilization combined with one of nature’s most majestic animals.
I don’t feel well that day. After 40 km of cycling my condition gets worse. I’m close to throwing up and feel a growing muscle pain and headache. We have been warned about Delhi and the street food. But it was all so delicious. Soon it is clear, that I have some sort of infection. However, for the last 40 km there was no room to relax or just sit down. There are also no bushes to jump behind. There are people just everywhere and traffic and one stall next to another. As soon as we stop we are surrounded by people staring at us.

It is not as annoying as we had heard before, but what can I say: I’m sick, so everything starts to annoy me easily and I’m really looking forward to having some room for my own. After around 80 km we arrive in a little town called Hapur. This little town is still inhabited by 260.000 people, though. It is unbelievable.

I want a hotel or guesthouse, a toilet, a real bed, a pharmacy and – most important: I want 260.000 people to leave me alone. We find a guesthouse, but cannot find the entrance. Some people point at the entrance of a temple. After a while we give up and follow their advice and enter the temple’s backyard. Some children are excited, but other than that we don’t really know what to expect. Soon someone leads us into a small office, where a guy with a turban and a long beard sits behind his desk. He speaks hardly English and with a really funny accent. I like that. He tells something about a guesthouse and then wants to see our passport. He ask some questions about our journey and translates our answers to other guys with turbans and long beards and they all seem to have fun.
Soon someone leads us to our room. All I have wished for, even a sit-down toilet and air condition. That’s great. We have just checked in to a Sikh Temple and it feels very good. Not only because the room is perfect, but foremost because they are absolutely relaxed people.

I tell them about my muscle pain, headache and nausea and they tell me to just eat and tomorrow everything will be fine. Unfortunately the next morning it is not. After Cora had to suffer in Uzbekistan, it is now my turn in India. I have fever and it feels like I am having the flu. The chief of the temple takes me to a hospital. Actually it is a private clinic, where an Indian doctor treats everybody for free. Chief-Sikh manages to get some priority processing for me, so within minutes I am in the doctor’s office, while approximately 200 people sit in the waiting hall of roughly 40 m². The doctor says what I suffer from is a common infection currently affecting a lot of Indians, too. I also mention, that I suspect I brought some Gardia amoeba from Central Asia, because frankly, since Iran (3 month ago!) I never really got rid of the diarrhea. And unfortunately the doc in Almaty only treated Cora, because she additionally had pain. The Indian doc agrees and I get some Metronidazole pills. He also wants to take a blood sample to make sure I don’t have Dengue fever, which is currently also pretty common especially in Delhi. We have seen many info posters everywhere.

In the evening I get the results. No Dengue and all other values are very good. Chief Sikh is very pleased and happy for me. I just have to relax a few days and everything will be fine again. On Saturday there is a big wedding in the backyard of the temple. 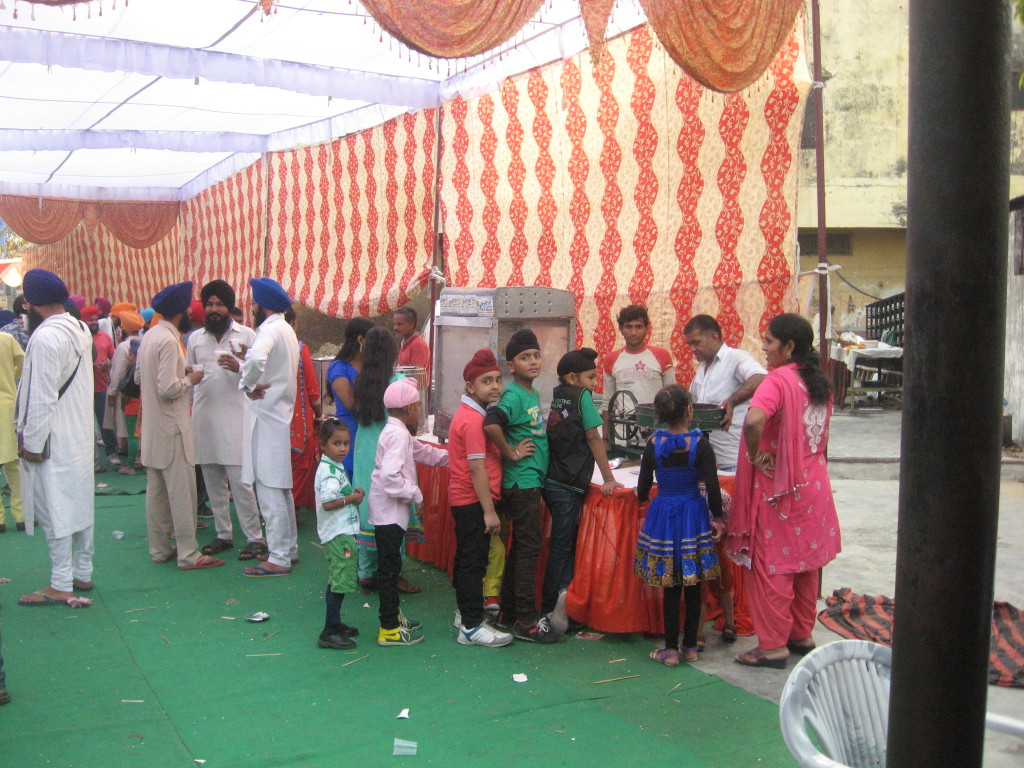 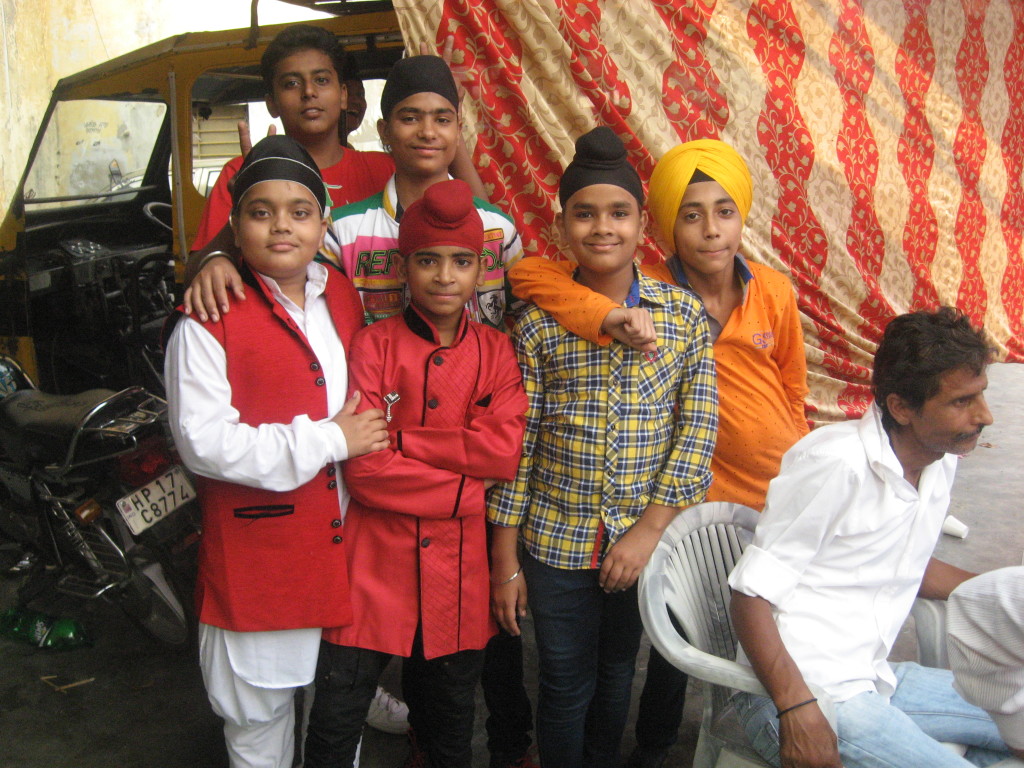 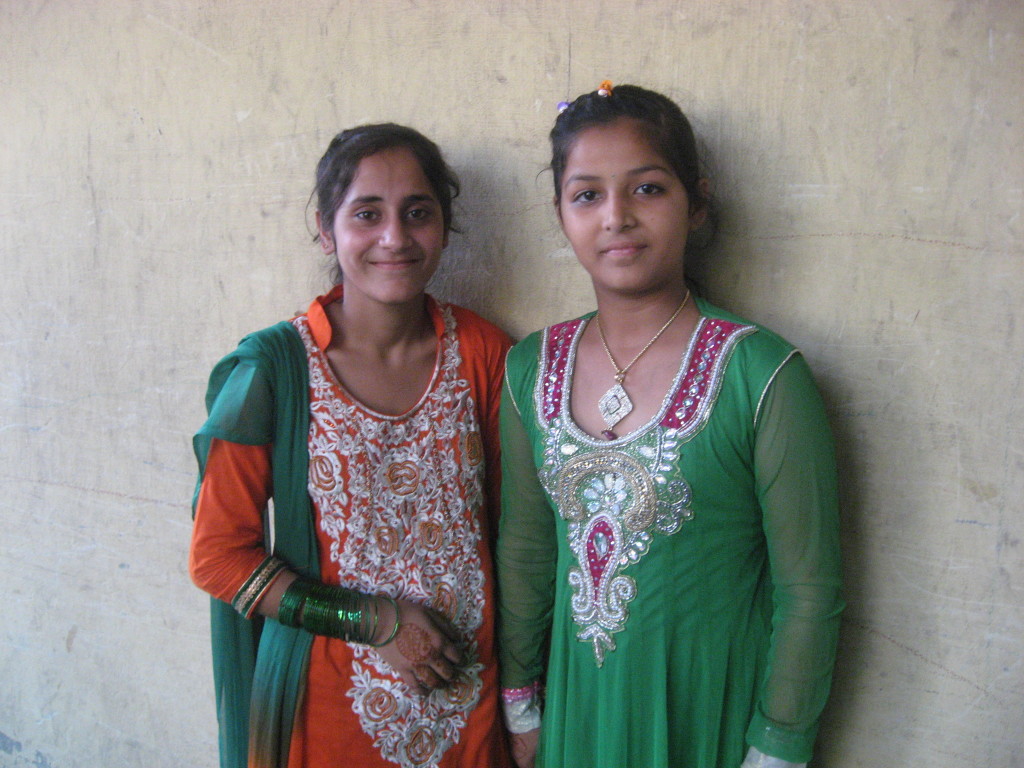 We both like the Sikh. And their religion is equally likable. They refuse hierarchy, they refuse religious rituals, they even have some sort of a capitalism clause that states it is OK to compete with others and get rich. After all it is a young and modern religion. Of course right now they have a hard time because they look a lot like Taliban. Chief Sikh told us how children pointed at him and said „Osama Bin Laden“ when he visited Germany a few years ago to see the Sikh community in Frankfurt.

Altogether we stay three nights at the Sikh temple before we continue towards Nepal. I feel pretty good again but also very tired. Cora also feels tired and exhausted a lot. Maybe it is the humid climate or the heat. We sleep a lot and often start cycling after 10 am. Of course India makes you also very lazy in general. We don’t prepare our own food, instead we buy something on the street. We don’t even buy groceries, because with the heat everything turns bad quickly anyway. We stay in hotels, because they are pretty cheap and there is actually no room to pitch the tent anywhere. Also the road to Nepal is flatter than the Netherlands. 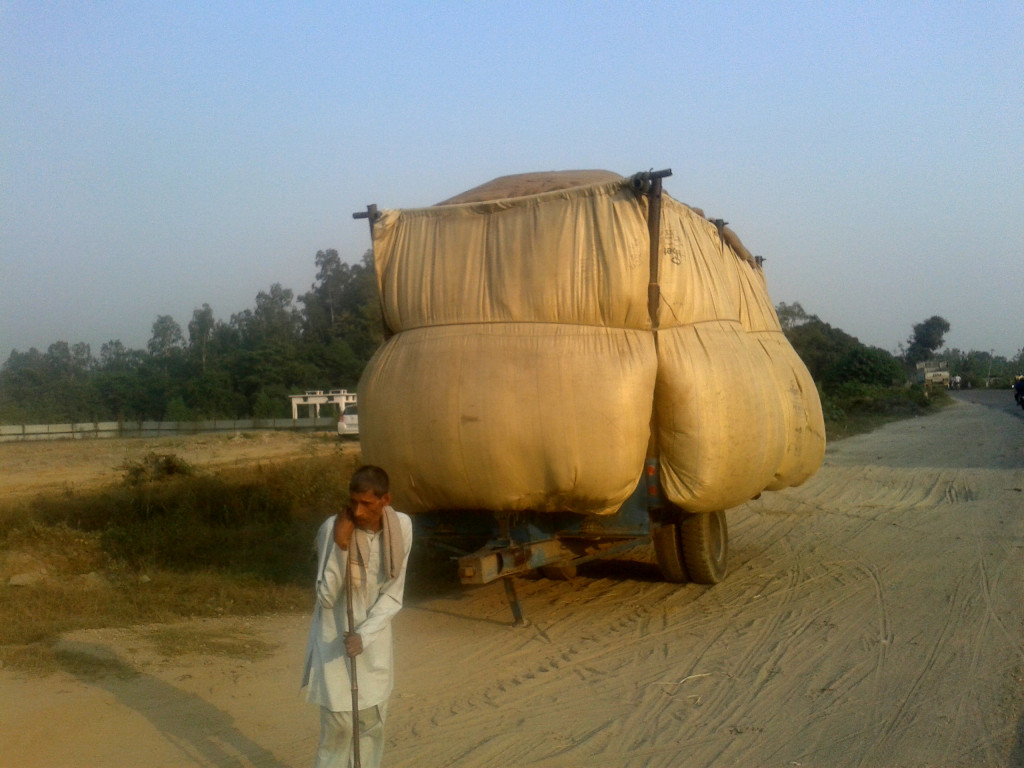 In Kichkha we meet Raj, a business man, while looking for a hotel. He invites us home and in the evening takes us to the Vijaya Dasami festival with his motorcycle. Now imagine a place like India having a festival. Crazy. Where do all these people come from? This is supposed to be the small town. And why do they have to make noise all the time? You could place a South African football stadium filled with 60.000 fans and their Vuvuzelas next to this – you wouldn’t hear it. They also burned a huge statue of Ravana at the festival, but we arrived seconds after it had burned down. Guess why? You got it. We were stuck in traffic.

One child policy
I never really had a strong opinion on the one child policy of China. I always only found it a very deep influence on the people’s private life. But I never really discussed it. After being in India for a few days, I am a big supporter of the one child policy. Why? That’s easy: They are too many. I have never seen so many of anything in one place. There is more room in a box of Pringles and even this box gets emptied sooner or later. But here is no end in sight. I mean I like the Indian people and I don’t think we need less of them, but they need less of themselves.
On the other hand I found something reassuring: We don’t have to be afraid of swine flu or H5N1 or any other media hyped epidemic. As long as Delhi is still standing, we have nothing to fear at all. Because if a contagious and dangerous virus ever makes it to Delhi, there is no chance they can stop it from spreading.

The road to Nepal finally gets less busy and sometimes we cycle through jungle for a few hundred meters. But still there is a lot of traffic. Not only cars, but also cyclists, a lot of motorcyclist and: Trucks. I like these trucks. They are like tattooed bodies. Every truck driver paints his truck differently. They are all hand painted and very colorful. Have a look.

We finally reach the last village before the India-Nepal border and want to stay there a last night in India. But we meet some western tourists, who recommend crossing the border today, because there were more, better and cheaper hotels on the Nepalese side. So we cycle another eight km and finally pass the Indian border checkpoint at dusk. 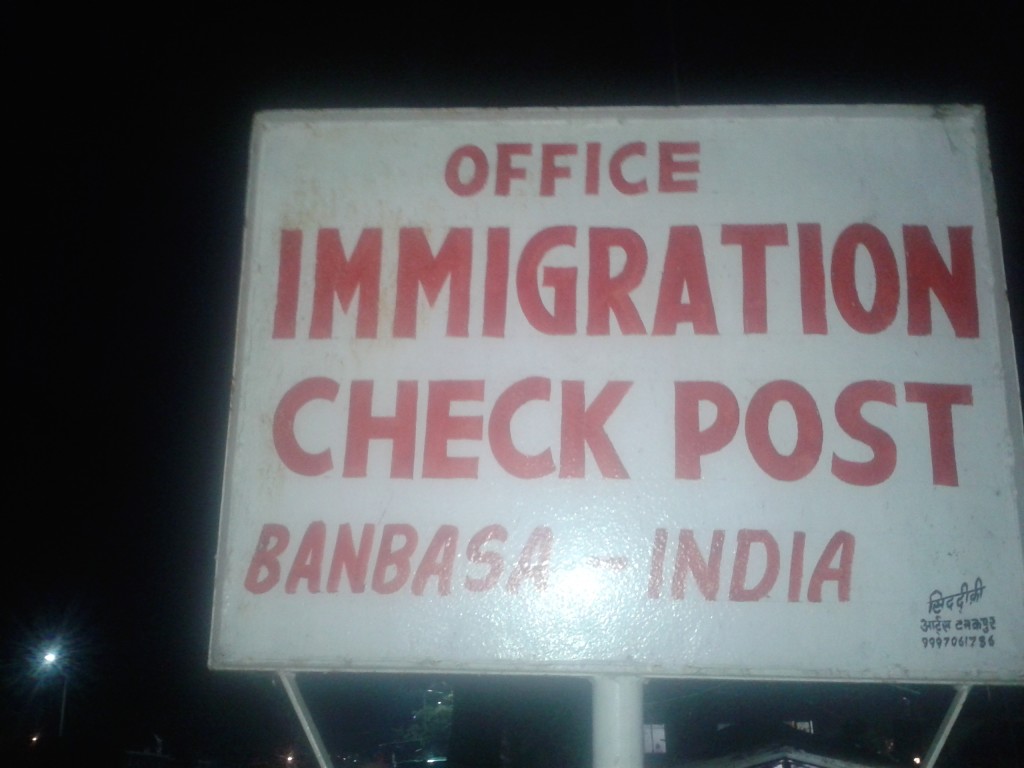 And we really pass it, because nobody is stopping us. Just a guy waiting in the car queue tells us we actually have to go to the immigration office, before we leave India. It takes very long but we finally get our stamp. It is now completely dark and we continue towards Nepal. Somewhere a guy on his motorcycle tells us, that we need to go to the immigration office of Nepal, too. We enter a little house which is barely visible from the road. A guy in his pajama is sitting in the office. He asks if we have been at the Indian immigration office, because apparently a lot of people just don’t take notice of it. Then he writes on some paper and sticks it in our passport. We just got a Nepalese visa for 30 days. We continue on the road. Some soldiers are standing around at a barrier gate. I ask if they want to see our passport. They only ask if we have seen the immigration office and got our visa. Then they let us in. It was the laziest border crossing on our journey so far. We still have to cycle a few kilometers until we finally arrive in Bhimdatta, the first village in Nepal. There are several small guesthouses, which are cheap but with very poor standards. We saw several signs of the Opera Hotel, the best hotel in town so we give it a try. It is only 12 dollars per night and tired as we are we immediately check in.