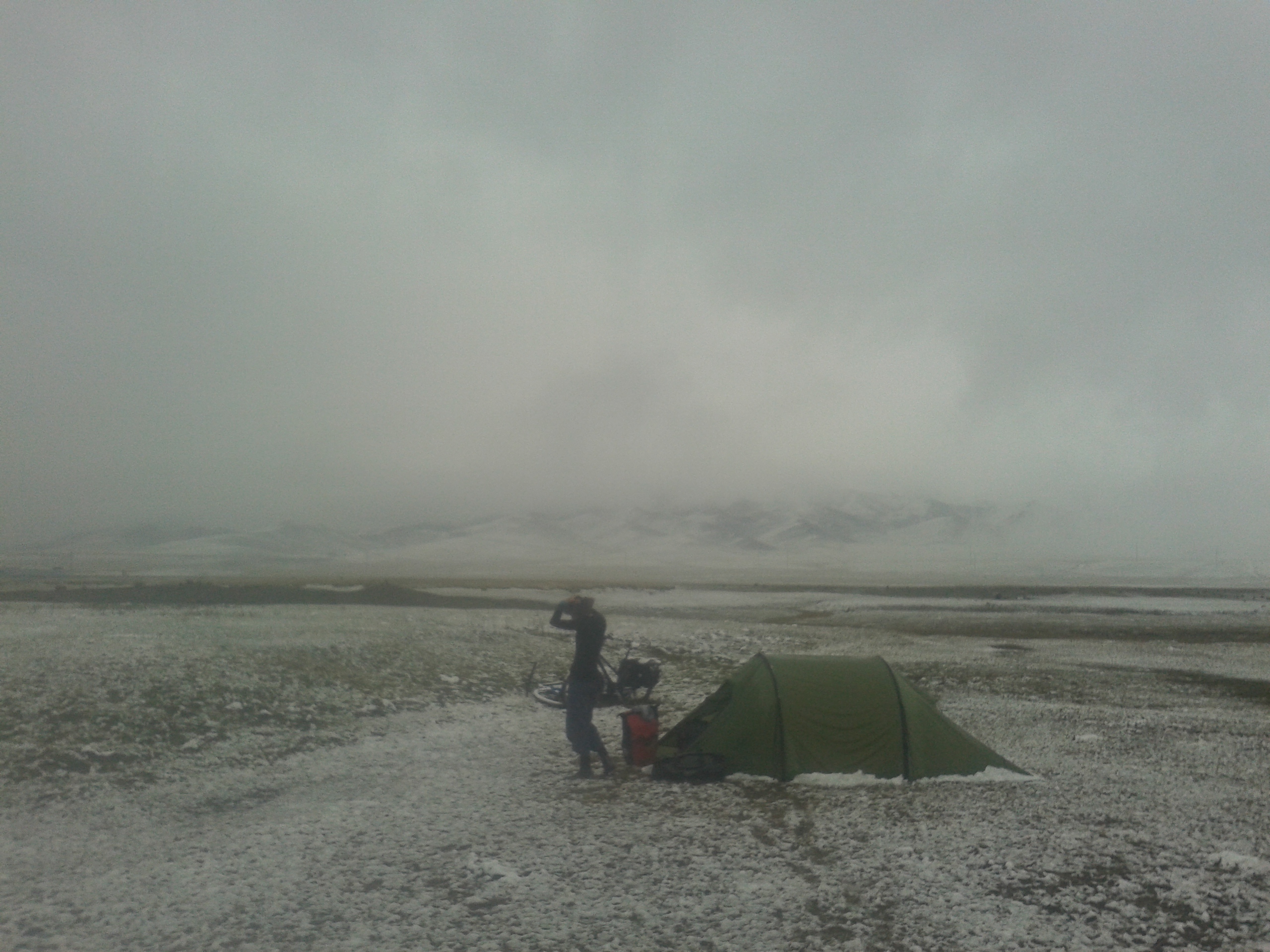 The first kilometers of Kazakhstan are just windy and rainy and cold. We reach Kegen, the first village with an ATM. Of course it doesn’t work so we have to change dollars for a ridiculously low exchange rate.

We pitch the tent just outside the village next to a small river. We wake up to this: 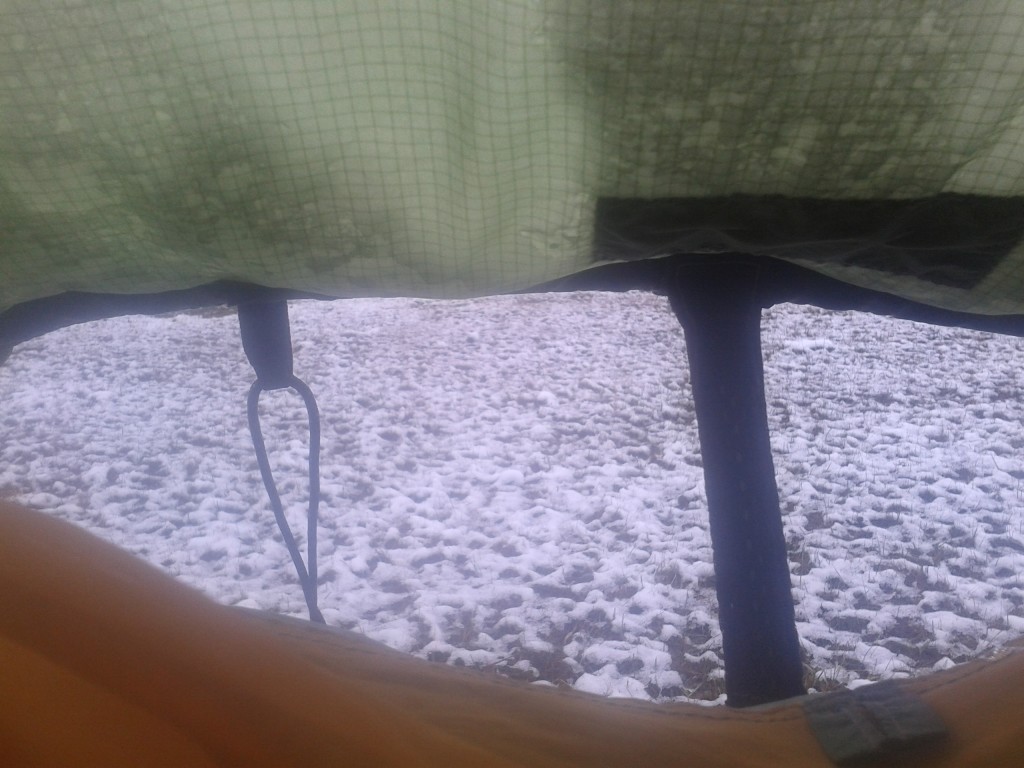 Snow. Now that’s not too much of a problem, but the temperatures are just around zero, so it is actually a mixture of snow and rain the whole morning. Also still strong wind and the sun won’t show up this day. We think about cycling to the next village around 40 km away, but soon decide to take the bus.

There is a bus station in Kegen. Of course there are no buses running but it is a good shelter from the wind and rain. A guy is repairing his old Mercedes and jokingly asks if he can take us somewhere. Later he asks if Cora wants to sit in the heated car. We try to get a ride, but have no luck. After an hour the guy has fixed the car. Now he asks again – seriously – if he can take us somewhere. A car with a full trunk and no roof rack. But he proudly shows us two blankets and even fishes some string out of his trunk. Well, we haven’t made terribly good experiences with these kind of cars, but hey….you know….the options are limited and his price is good. 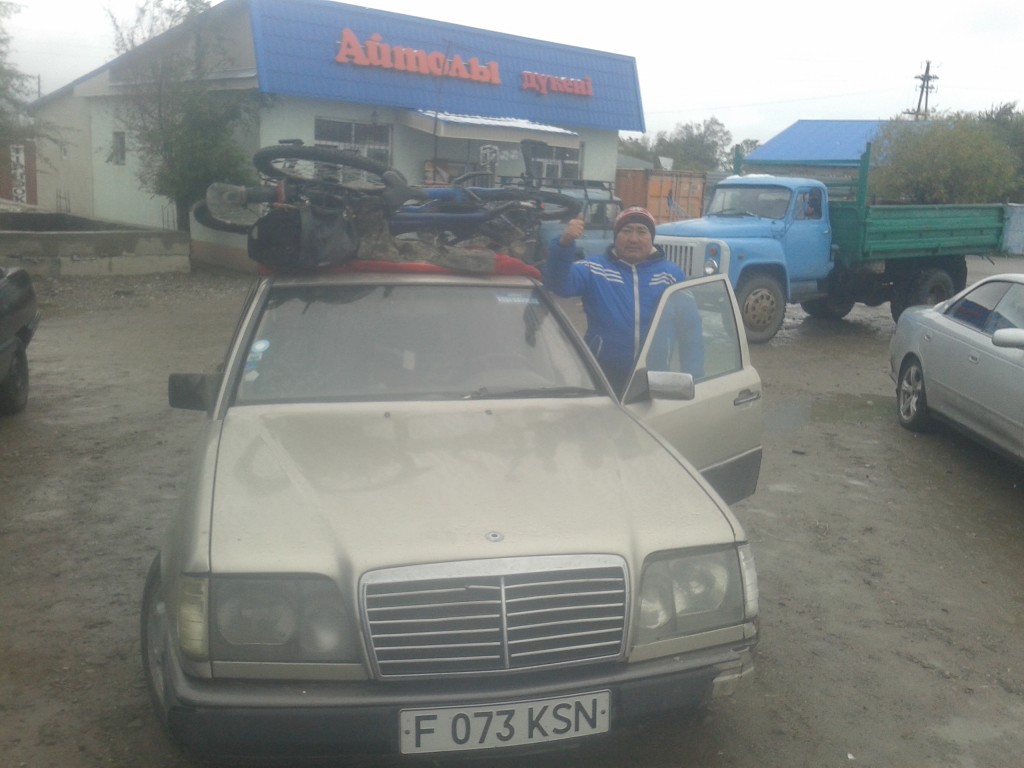 He takes us all the way to Chilik and is very talkative. He shows us a good restaurant and when we leave gives us his fishing pole. The weather in Chilik is sunny and warmer. We pitch the tent again a little outside the village. 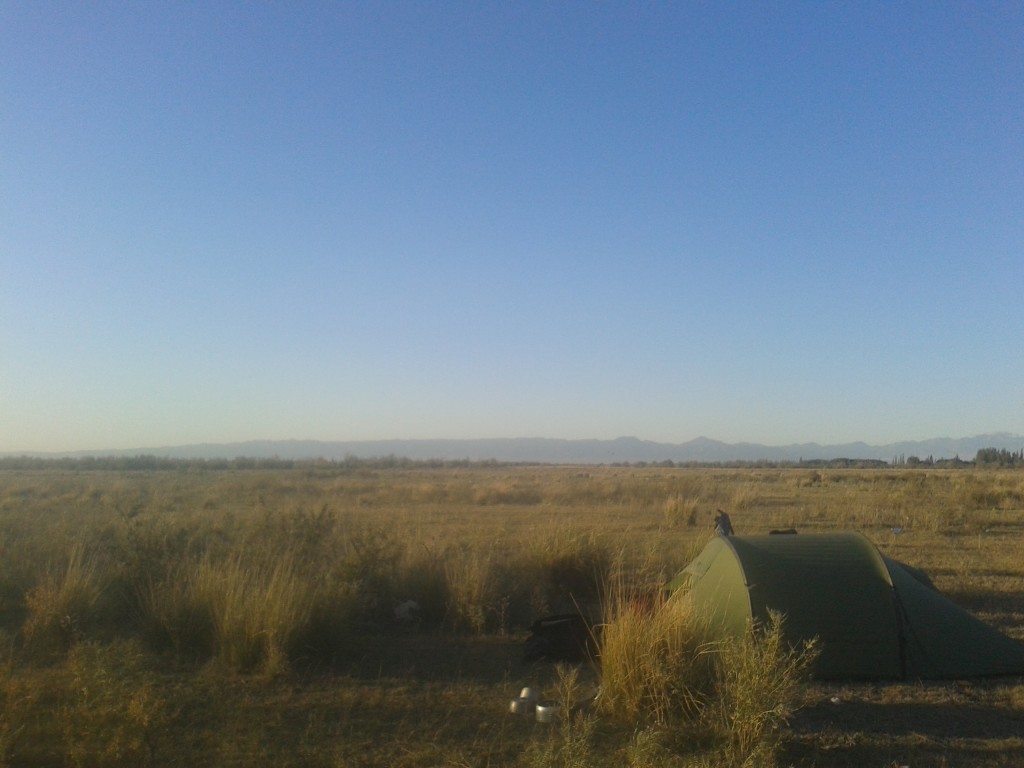 The next day we try to register, because allegedly that’s what we have to do. I wait in the office like everybody else. People look like in Germany going to work on public transportation. Every process is slow even though many people are working in the immigration office.

I enter the office of the chief dude.

So we leave Chilik and start to cycle on a big road, which is currently under construction. Outside the city it becomes avirgin highway, because cars aren’t allowed to drive on it yet. In the end we cycle around 40km alone through the middle of nowhere on an almost finished highway, with a perfect surface and strong tail wind. 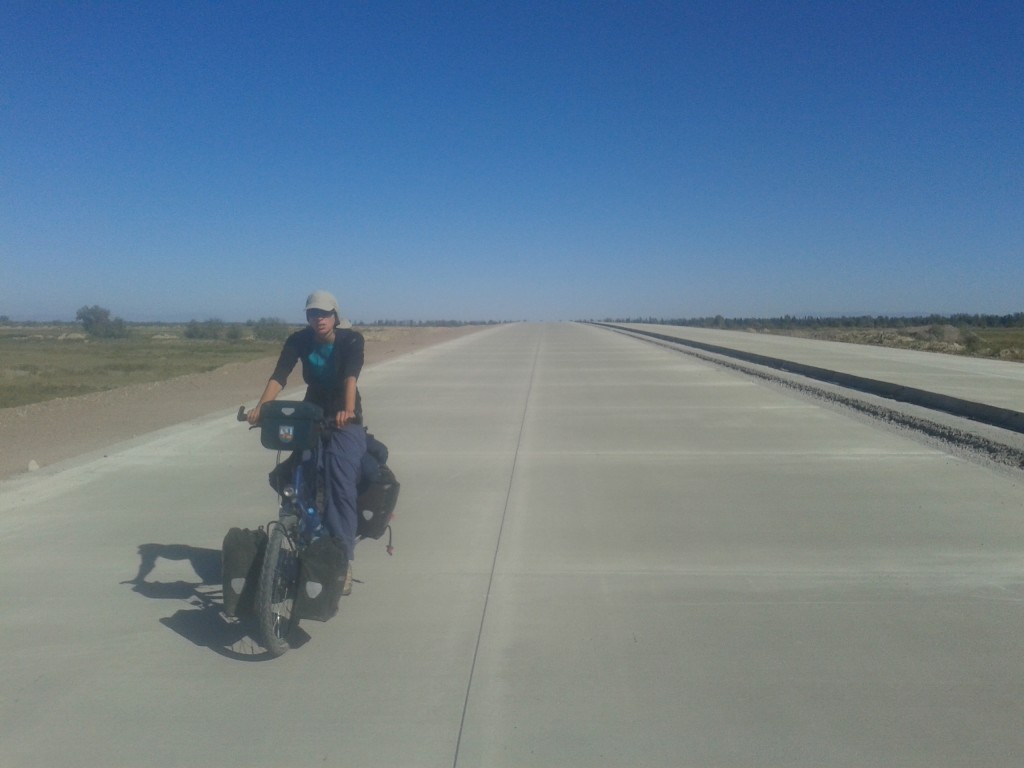 We pitch the tent another night some 40 km from Almaty. The next day we arrive there and already have accommodation, because we met Nick in Tajikistan. Nick is a cyclist from Almaty who cycled the Pamir highway in the opposite direction. We met him between Dushanbe and Khorogh and he invited us to stay at his place, when we arrive in Almaty. This was already two month ago. But we also asked Nick, if our German headquarter can send a parcel to his address. He agreed.

We meet Nick late at night because he works till after midnight. We stay two nights at his place. The parcel also arrived.

Also inside the parcel are several replacement parts and other stuff we couldn’t find during the last few month. Cora finally has a new USB-werk and brand new hooks on her rear panniers. Feels like being fully charged again.

After two nights we move to a warmshower in Almaty, stay there for another two nights and then move to a small room we found on AirBNB. We have to stay at least until October 8th, when we can pick up our Indian Visa.

After almost two months we are finally in a city again. And not just a city, it’s actually the real Big Apple. Almaty means Apple City. We see a lot of the city, while we are organizing the next part of our trip. Almaty was once the capital of Kazakhstan and therefore has a lot to offer. You really get (almost) anything. Even Vaihinger fruit juice, though extremely expensive. We enjoy eating in restaurants again, sometimes even with English menus or English speaking staff. We don’t do any sightseeing, but find the very nice Gandhi Park by incident.

An interesting thing about Almaty is the fact that everybody is hitchhiking in the city. Even business people just wave down any car and ask if it is going in the desired direction. The city center is build in squares, so it is often easy to take a car for a few blocks.

We also go to a western clinic to do a physical check. We have been sick a lot in Central Asia and and we don’t want to contaminate the Indian subcontinent…..you know? So we want to make sure to enter the plane healthy. And in the end the travel insurance has to be good for something.

By the way, our flight is departing on October 13th from Bishkek. We found a cheap flight with Pegasus Airlines, which is only available from Bishkek. We actually have to leave Kazakhstan anyway on October 10th because without a visa we can only stay in Kazakhstan for 15 days. Kazakhstan is big and we have only seen a very small part of it. Almaty was supposed to be the finish line of the second „stage“ of our journey and actually we feel like we arrived. I am curious to see Bishkek, though.

In a few hours we will pick up the Indian Visa and tomorrow will take the bus to Bishkek. We have already booked a warmshower in Bishkek and even one in Delhi. We are excited. We will take a big step out of Central Asia and into the crowded capital of India.

Kazakhstan, greatest country in the world.
All other countries are run by little girls…