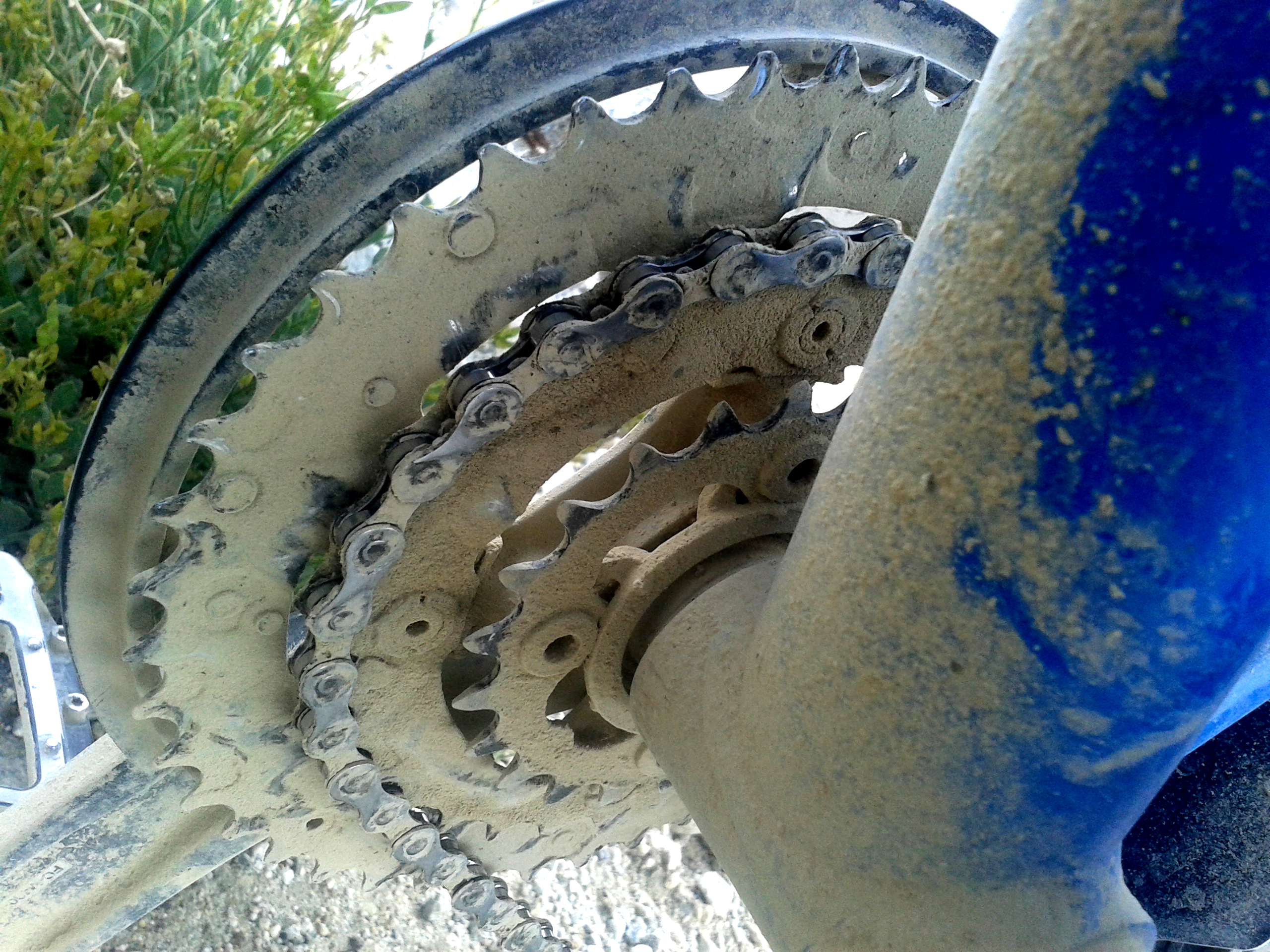 We have now been traveling for over 6 month and more than 10.000 kilometers. So far a lot of people helped us in difficult situations in every country. But during our time in Tajikistan and Kyrgyzstan things were a bit different.
Most of the time we had to rely solely on our equipment. That’s why I want to write about some things we carry with us. Things that just work and often make our life easier. Thanks for not breaking…

The Lord of the Rims 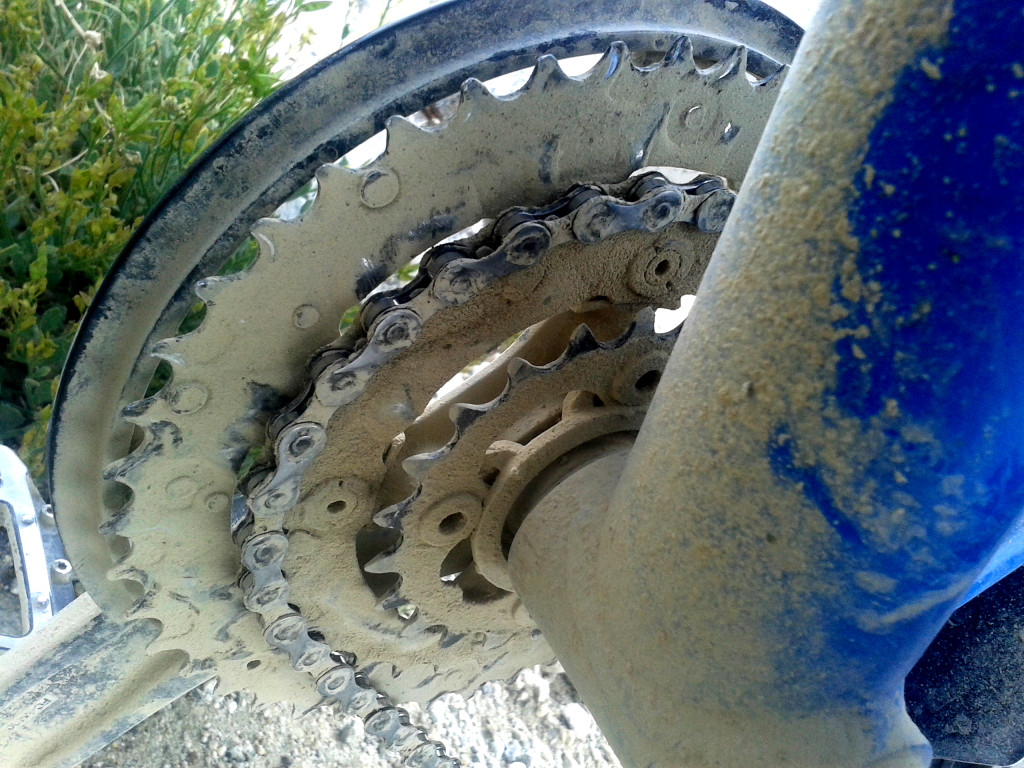 First and foremost our bicycles are the most important equipment. Without them it could still be a journey, but a totally different story.

Since the Pamir highway, I know that we got a lot of good advice when we bought our bicycles. We use very strong wheels. The rim is a Ryde Andra 10, one of the strongest you can get at the moment. Spokes and nipples are also extra strong.  Even the hardest hit hasn’t caused the slightest damage. We have seen other cyclists with broken spokes already. But we didn’t even have to adjust them a single time.

The Schwalbe Marathon Mondiale tires are also durable and great. So far we only had 5 flat tires.
We decided to cycle on mountain bikes. So we have wide, 2.25 inch tires which are easy to cycle on very difficult and versatile terrain.
We have high quality hubs and brakes. But we saved money when it comes to parts that get heavily used, like the cassette and chain rings. In this case we actually cycle with low quality Shimano Alivio parts. That’s because we usually don’t change gears a lot. So in our case low quality is sufficient. After all the sand and dirt do a lot of damage and therefore it has to be replaced sooner or later anyway. It wouldn’t make any sense to just wear down high quality material.

Our aluminium frames are made in Germany by a little company called CustTech located next to Cologne.

Several times during the last weeks in the Pamirs I was amazed by the durability of our bicycles. I wasn’t aware bicycle parts have reached this level of quality. 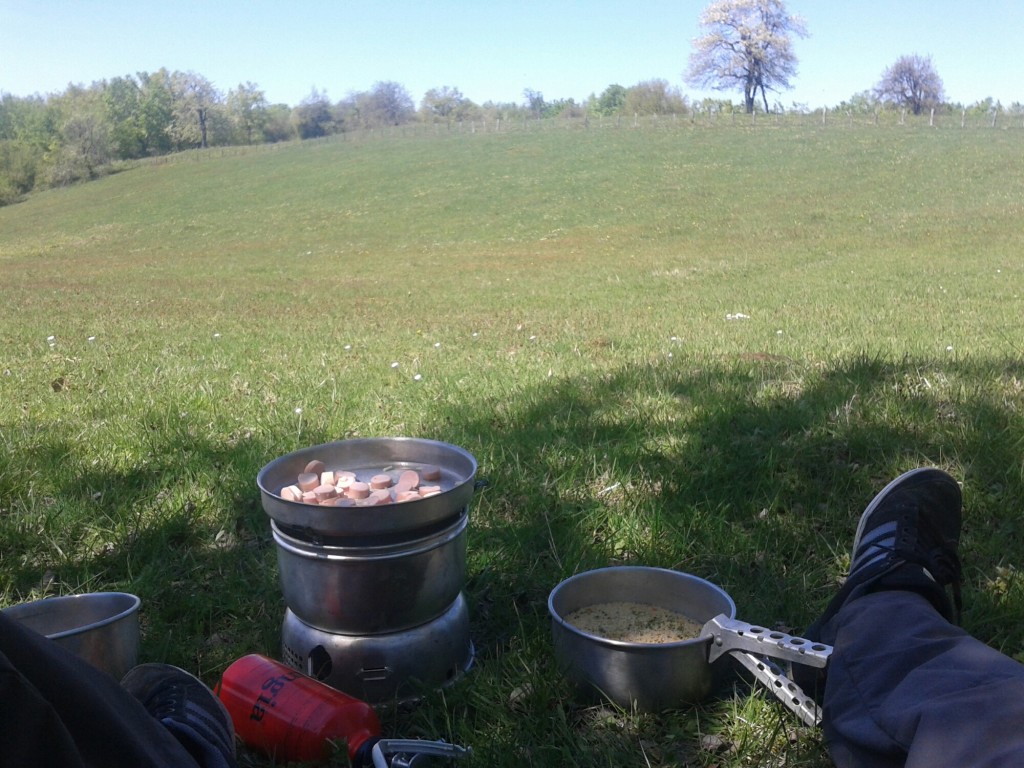 For years I have been using the Trangia camping cooker, which comes bundled with a simple burner that runs on spirit. Since spirit isn’t very well available around the world (and has a different name everywhere), I decided to replace the simple burner by a Primus Omnifuel burner. The King Primus with its blueish crown of flames burns virtually anything: Propane, fuel, diesel, kerosene, petroleum and – as the name implies – probably everything else that is flammable.
We usually use unleaded A-95 fuel which is available everywhere. It even burns better than the Super98 from Germany. Apparently in the Super98 there are additives which may be great for a car engine, but only cause trouble in a camping burner.
The Primus and the Trangia form a very reliable duo, which has helped us prepare countless meals. With a little patience it even worked in 4200 m altitude: 12 minutes to boil a liter of ice cold water. 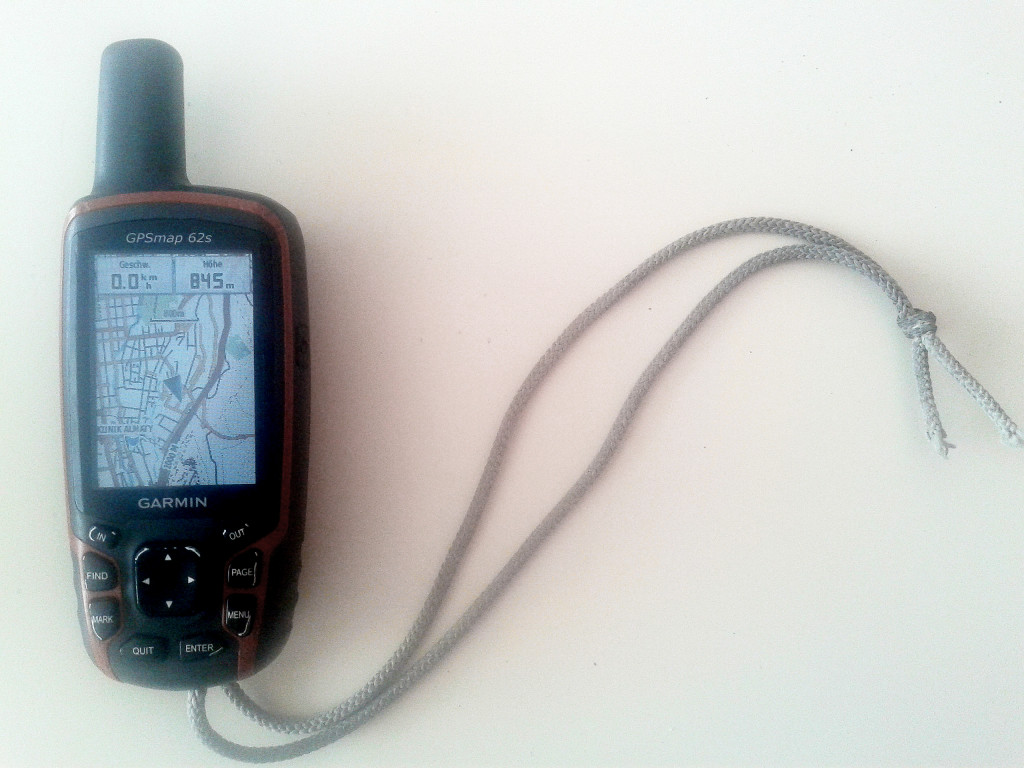 We actually met people who travel without any map. But usually everybody carries some sort of map with them. In our case we use OpenStreetMap based maps on a Garmin GPSmap62s, which we got second hand on ebay. The OpenStreetMap data is freely and openly (and legally) available for Garmin devices here. In case you don’t know about the OpenStreetMap project it is worthwhile having a look.
To be honest I like paper maps and it is all fun to calculate your position by shooting azimuths. But on a daily basis a GPS just makes things easier. As a backup we also have a smartphone with GPS and the Maps.me app which also uses OSM data. If both fail we have a compass and yeah, to be honest we are not conquering Antarctica, so usually we can ask people for directions.
In some countries the OSM data is so accurate, that we can easily find ATMs or supermarkets and navigate to them. Also if we arrive late in some town even in Kyrgyzstan we usually get the position of at least one or two guesthouses. That saves us from wandering around in empty streets.
On top of that the GPS always saves our track, so you can actually see where we have been and an elevation chart shows what mountain passes we have accomplished.

The Garmin GPS is ruggedized, however, it got loose and fell down on the second day of our journey while going more than 50 km/h. Since then we put it on a leach, which adds up as an anti-theft cord.

Some consider the GPSmap62s a pretty old-school device. It has a very small display with bad resolution and it isn’t even a touch display. It is big, heavy and supports no Wifi or Bluetooth. It cannot send emails, nor play music. And every car navigation system is more convenient to use.  That’s all true, but:

I have seen too many cyclist bend over their smartphones, holding it with both hands to provide some shade so they are able to read it. And working on a non-waterproof smartphone touchscreen during heavy rain is also not really fun. Last but not least, people usually think it is a very old cellphone, so that means a low risk of theft. 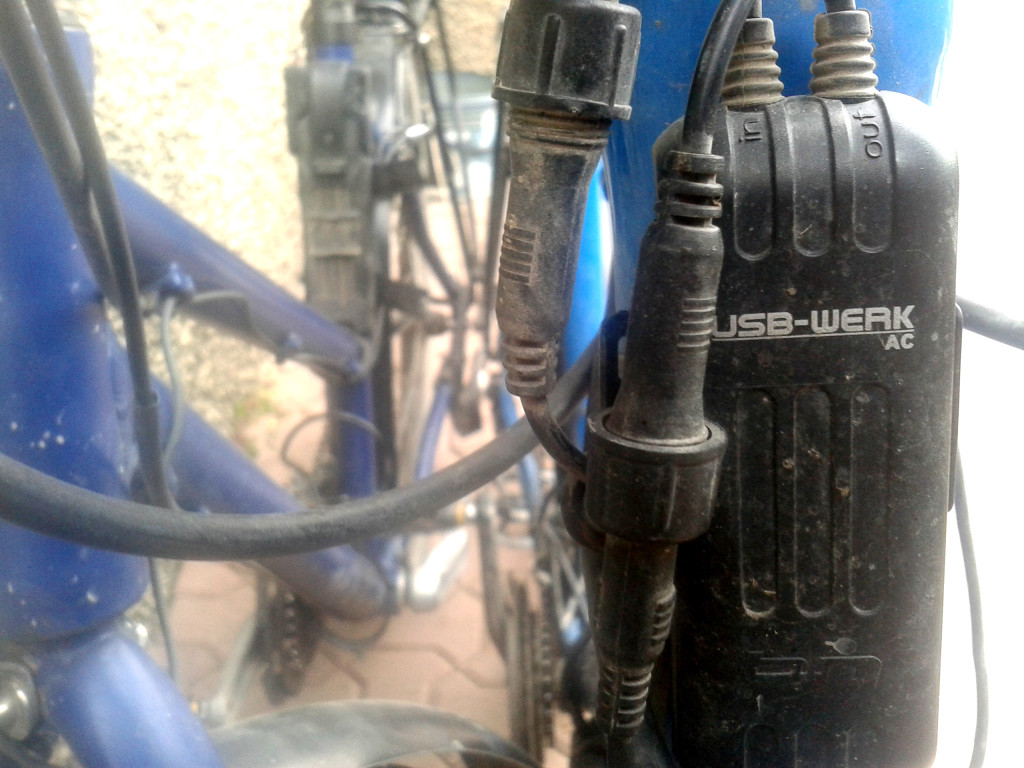 We thought about several ways of charging batteries during our trip. First we wanted to use a solar panel. But we ended up using the Busch&Müller USB-Werk.
It works together with the integrated dynamo of the Shimano front wheel hub. The USB-Werk has a small buffer battery which gets charged first. As soon as it is fully charged it starts to charge other consumers like the smartphone or the batteries of the Garmin. The buffer battery makes sure, that the consumer batteries are constantly charged, even if we take a short break.
Unfortunately Cora’s USB-Werk stopped working in Bulgaria already. We are not sure what’s the cause. Anyway since the warranty is still valid, we have send it back and got it replaced. A new one will be shipped to Almaty. 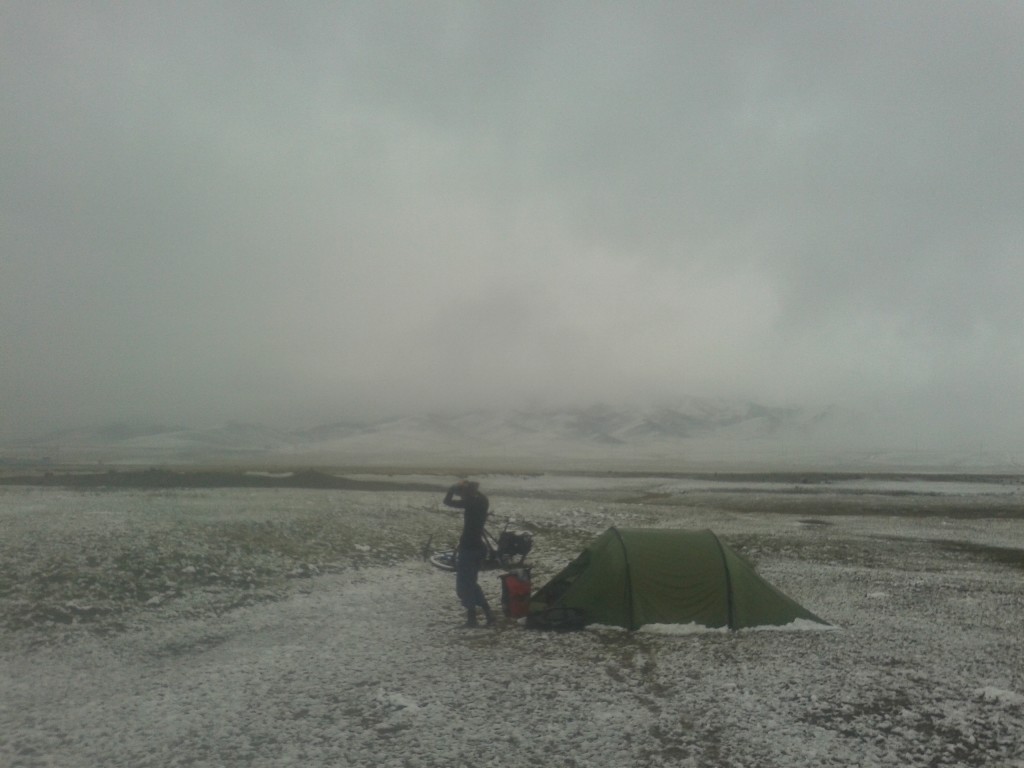 Because it is a great tent! We really like to sleep in the tent. Then the roof of our world is the Exped Sirius Extreme (link is to its successor, which is similar), which I bought already back in 2006. It is designed for 2-3 people and that makes it spacious on a world trip where you have a lot of equipment. Everything – except the bicycles – fits inside the outer tent. It is strong even during heavy wind and keeps us dry even on very wet ground.

Last but not least we just feel comfortable in the tent and trust it a lot.

Although not part of the tent I especially want to mention the Term-a-Rest camping pillows. They add even more comfort. We bought them just for this journey and they definitely paid off. 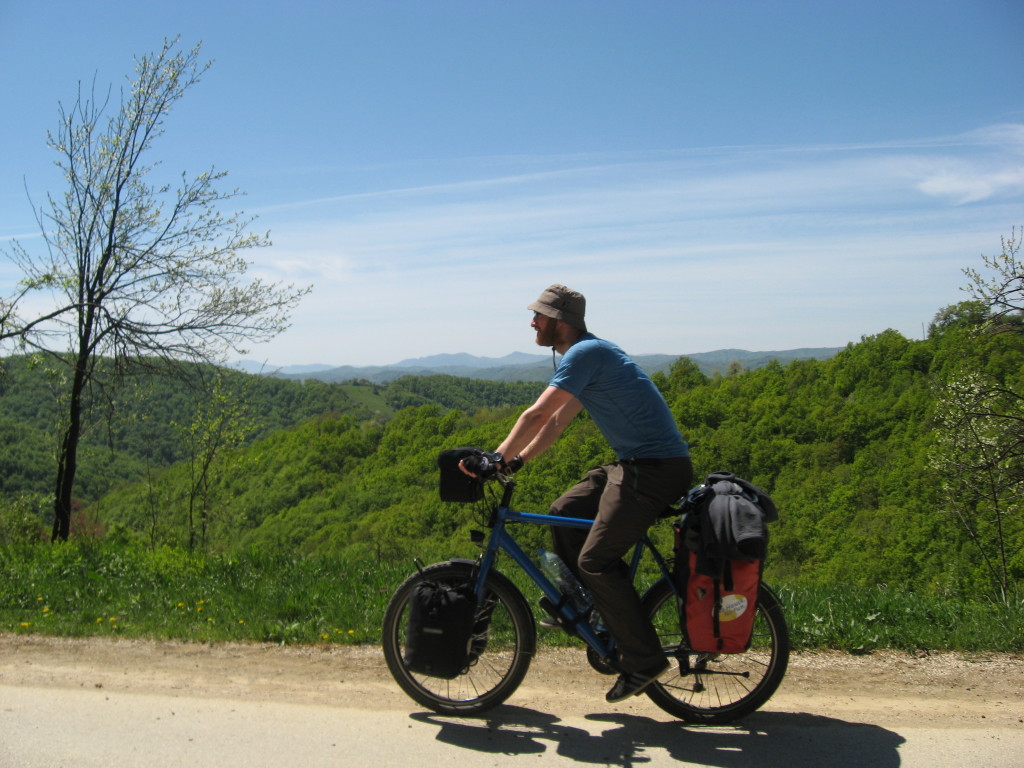 We mostly use second hand Ortlieb panniers we got on ebay. They are great. Cora has MSX rear panniers. All of the hooks of the MSX that attach them to the rack broke during the last weeks. However, we contacted MSX and they send us their cutting edge new generation of hooks for free. Until then a tree branch holds one of Cora’s rear panniers. The other one we keep in place with some tension belts. 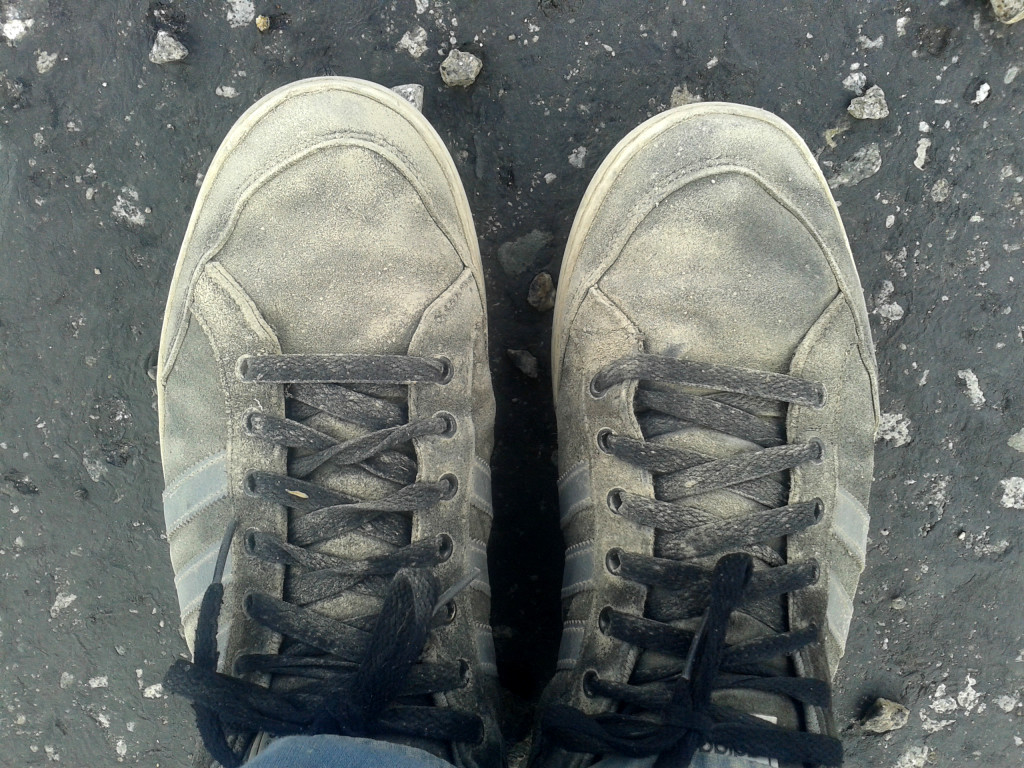 We have socks and underwear, but those aren’t worth mentioning. Some clothes however make life easier.
We’ve both send back our initial GoreTex rain jackets, because they just don’t work. I now use a non-breathable rain jacket and Cora uses a semi breathable jacket. They cost only around 40 Euro and get the job done. They keep us dry when it rains. That’s all we need.

We also bought several Merino Wool t-shirts and long sleeves. And we both got an Icebreaker Merino Wool sweat shirt. Just great stuff. Keep you warm, are extremely durable and just don’t smell.

And we both bought bike shorts. In six months I have used mine for two days. Cora didn’t use hers at all. So we’ve also send them back. Since my Mammut trekking trousers and the Chinese cotton trousers both were worn-out/ripped apart after a short time, I actually crossed the Pamirs with my old H&M linen trousers. In Osh I bought some sports trousers for 2 euros. I use them every day. They are great.

We have no special shoes either. I bought sandals in Sofia. Now we both have boots, sneakers and sandals. That’s everything we need. 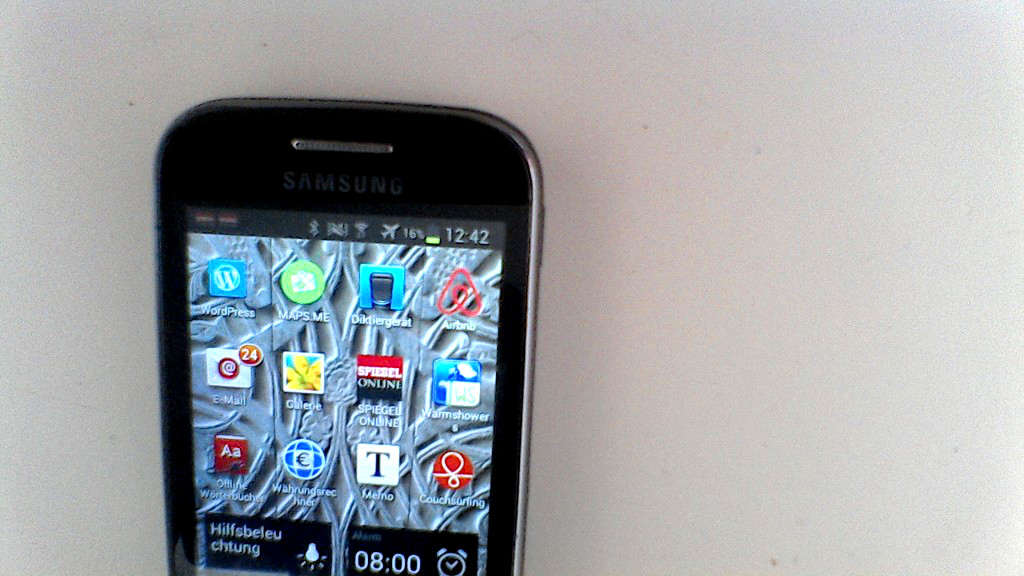 We also use some software (on my Android smartphone) I want to mention. I already talked about the Maps.me app, which I personally like a lot. We also use the apps of warmshowers, couchsurfing and AirBNB to find accommodation. The freely available offline dictionaries of Wiktionary provide translation from and to Russian and sometimes also English.

I was disappointed by the WordPress app, though. It is buggy and actually useless. It could be of great help, since our travel blog runs on WordPress and the app would make it easy to write blog posts offline in advance. But several offline written blog posts got lost, so we no longer rely on the app. We now write them in a simple text editor and add the images when we have an internet connection.

When we bought our bicycles, we were told that our price range is rather low budget. In fact a lot of world traveling cyclists choose much more expensive equipment. A common choice is to cycle with a Rohloff Speedhub. I find this a risky decision. If your rear rim gets damaged you cannot easily replace the whole wheel, but instead have to stick to the Rohloff Hub. They tell you it is unlikely that a Rohloff Speedhub ever fails. But we already met one guy who had big trouble with it. That the Rohloff needs no maintenance is also a myth. You have to carry special oil with you, which is almost impossible to get anywhere in the world.

After almost six months we have met a lot of cyclists. The cheapest bicycle I have seen belonged to a Hungarian. We met him in Murgab (Pamir Highway). His bicycle was 170 Euro. However he only used it to cycle around from peak to peak, because he was actually a climber and not a cyclist. Some Eastern European guys, however, cycle around the world with bicycles below 500 Euro. They report some trouble, but with less important parts. They usually have bigger trouble with the low quality panniers.
The most expensive bicycles we’ve seen were 3500 Euro and above. Either because of expensive special parts (e.g. Rohloff), material (e.g. titanium frame) or because they had suspension (you can buy a whole bicycle for the price of a high quality Fox fork).
So far I would say we are a good part below average. But of course we mostly met Western European cyclists. However, as I explained above, the most important parts of our equipment are thoroughly chosen.

And in the end a journey around the world won’t fail because of equipment. If you really want to do it, a leaking GoreTex or some broken plastic hooks won’t keep you from doing it.

And so the Lord of the Rims, King Primus of Trangia and Prince Garmin all lived together happily ever after.