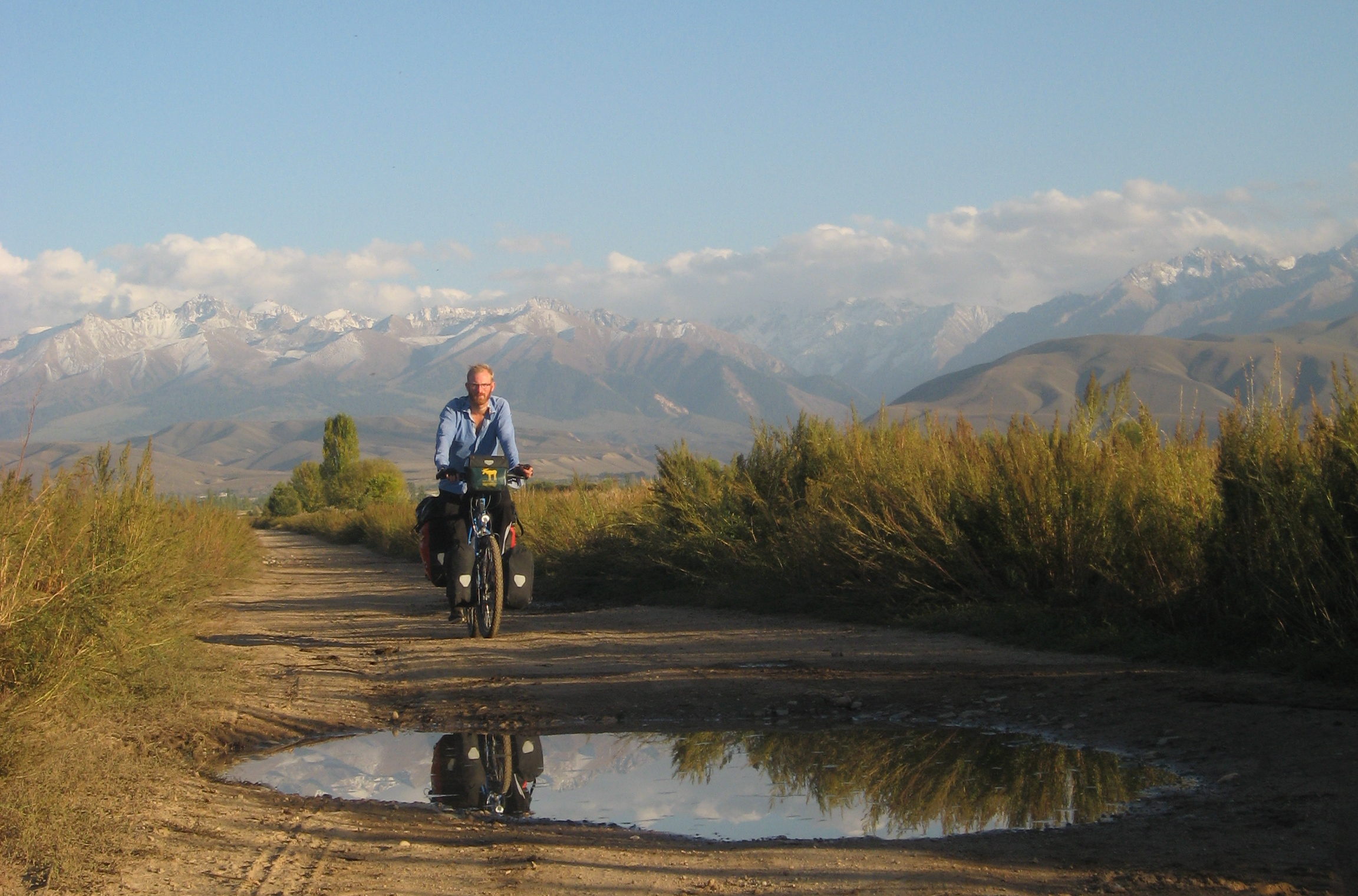 My last post ended in Osh, because that’s the end of the Pamir Highway. But Kyrgyzstan started almost 200 km before Osh.

We had cycled through 15 km of no man’s land and finally arrived at the Kyrgyz border post.

Not only can we enter Kyrgyzstan without a visa, but also immediately after the border the number of horses per inhabitant increases. Kyrgyzstan is the country of horses. In Hungary they had dogs, in Uzbekistan they had sheep, in Tadjikistan they had cows. Here they have horses. Lots of horses. Beautiful horses. They aren’t fenced in, they just run around everywhere. But usually they are standing around in the middle of the street. 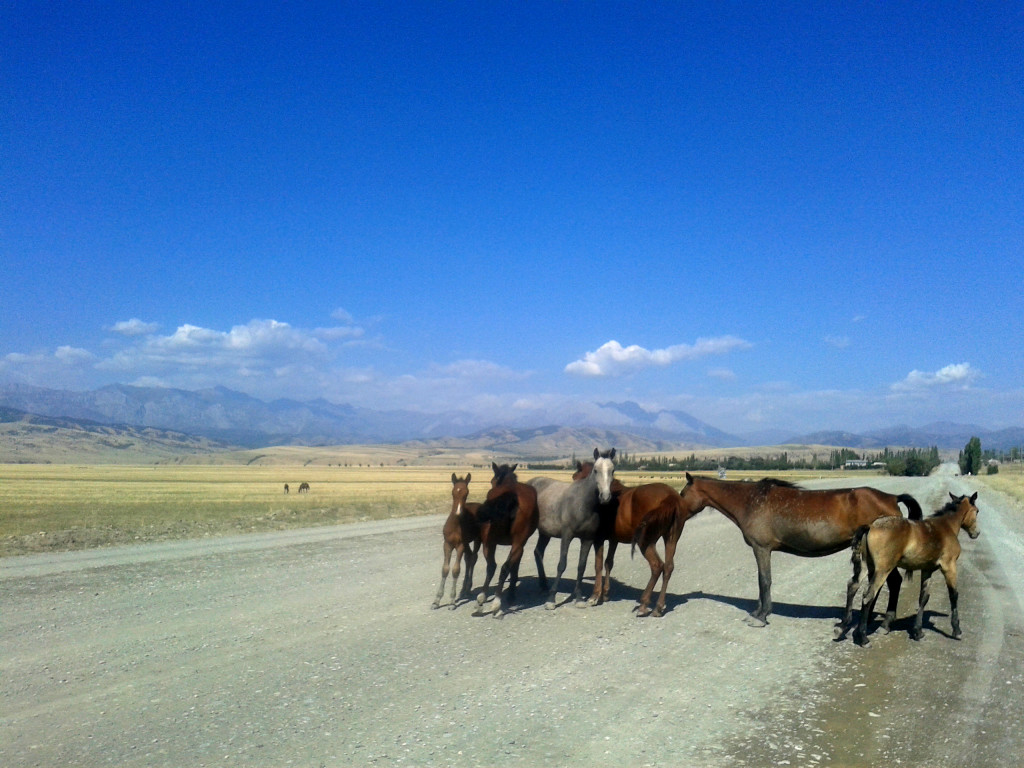 We had perfect weather in the Pamirs, but only after minutes in Kyrgyzstan rain and wind arrives. Some countries compete in flag poles, others in hospitality. Kyrgyzstan is one of the latter. A poor shepherd invites us into his yurt, where we enjoy yogurt and butter, while his wife is washing the clothes. The dog is laying just in front of the yurt entrance. Next to him, the horse and two donkeys patiently withstand the cold weather, while all bound to a small fence for the sheep. 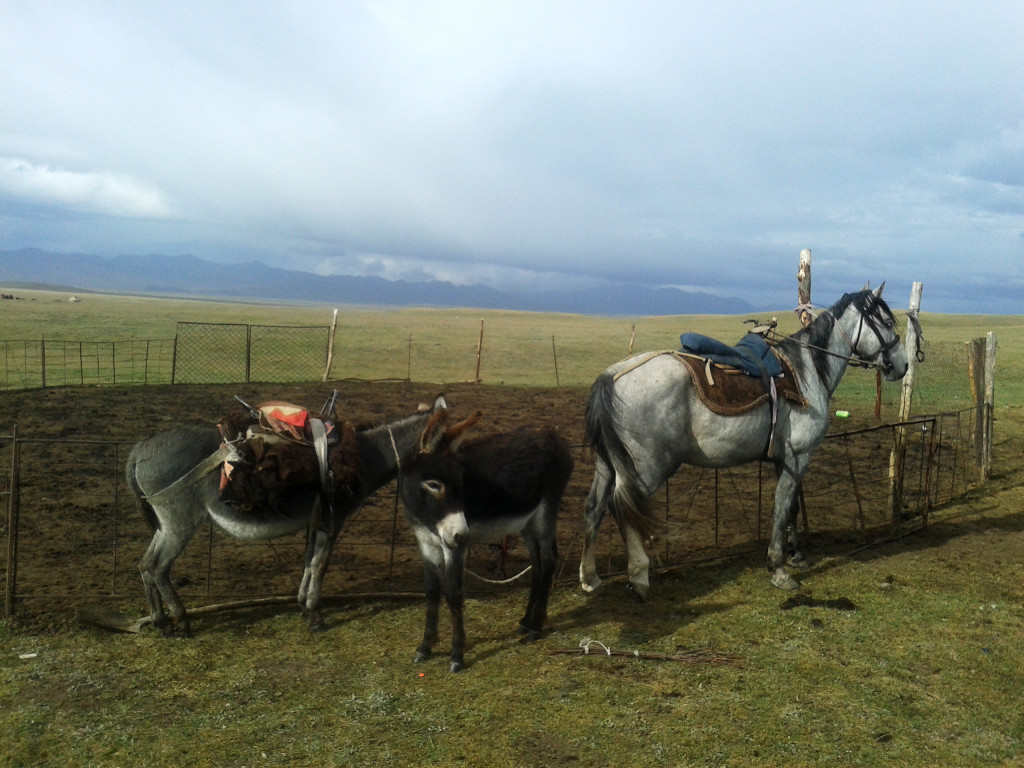 After the rain is gone we soon leave. We want to reach Sary Tash that day. We arrive in this small village in the late evening shortly before sun sets. Whenever we take a look back we see the amazing mountains of the Pamirs and Peak Lenin. Between Sary Tash and the Pamirs a several kilometers wide, green and silent valley with lots of free running horses gives us a first insight into this unique country.

The next day is rainy and we start with another uphill to around 3600 m. Once in a while a yurt is standing right beside the road and you can buy butter and milk from the farmers. And we finally meet Sonja from Germany. We have heard about Sonja for weeks. The first time already several days before Khorogh and we heard one story after another about her while we were cycling on the Pamir Highway. Sonja apparently was always only a few hours or days in front of us. We even got info about her current health status and were actually a bit concerned about her, because the last info we got about was from the Tadjik border post. He said a German woman – travelling alone – just collapsed after arriving at the border.

Anyway, Sonja is pretty surprised how much we know about her, while she knows nothing at all about us. And we wonder how many stories are told about us – literally behind our backs.

The road towards Gulcha is well paved and the valley is green. I have to repeatedly tell you, that everything is green, because Tadjikistan was all sand and dirt and rocks. A little creek is following us along all the time. It’s all so beautiful.

A day later we arrive in Osh and stay there for a week. I can’t tell you much about Osh, except that it seems to be the headquarter of dudes.

When we feel ready for more adventures we head towards Jalalabad. The hills surrounding us are all golden as autumn has set in. We follow the main road for a while, then leave it to reach Kara Alma a little village we more or less randomly choose from the map. We stay there two nights and somehow get part of the village for this short time. Some bold little boys get a bit annoying, but all the other inhabitants like the unexpected guests. At night we hear a lot of wolves up on the hills around us. Whenever one of them howls, approximately 500 dogs bark for minutes. Seems like they are finally good for something. Another common problem in countries, that are inhabited by cows a lot seems to be runaway calves and/or under-protective mothers. Like in Georgia, mother and calf need hours to reunite mostly because the calf cannot find this one hole in the fence through which it escaped. The second night we hear a heavy breathing right next to the tent. Now what the hell is that? I look out the „window“ to see a huge cow examining our tent. CSI-Moo-ami again investigating the case of the missing calf.

You see problems are getting more rural. 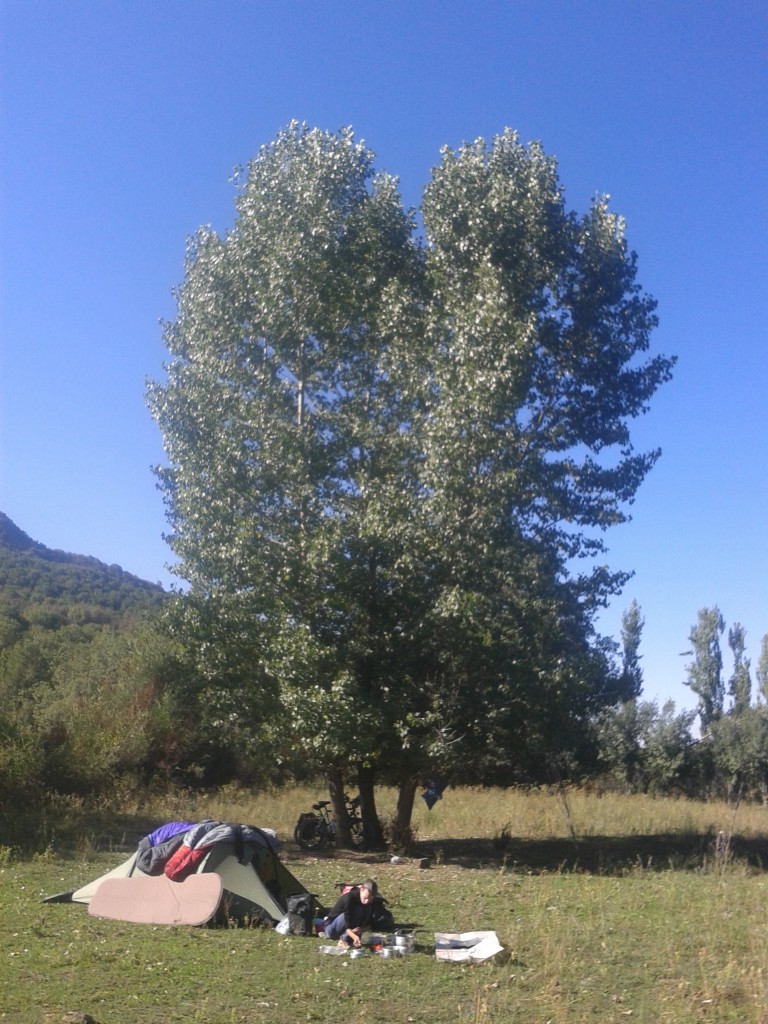 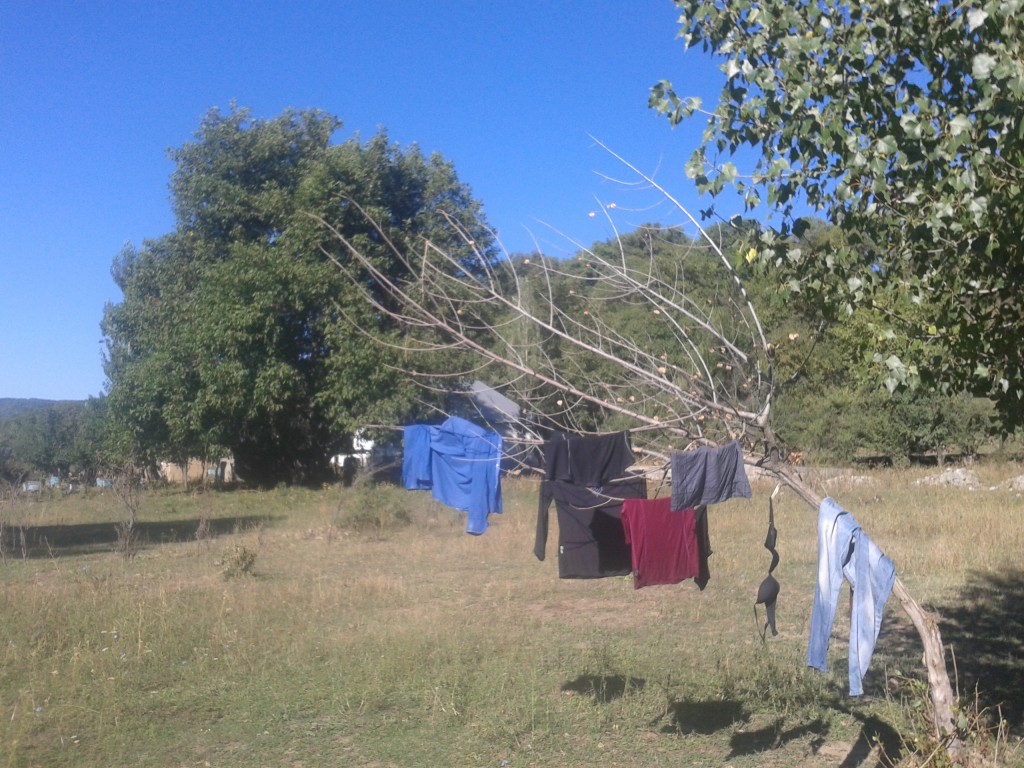 We then move towards Kazarman the only village within the next 120 km or so. Seems a bit like in the Pamirs, but doesn’t really feel like that. We almost forget to get fuel for the burner and enough supply, because Kyrgyzstan looks just so inhabited and green and full of life.

After 10 lazy days another pass is waiting for us at around 3000 m altitude. A long climb and we reach the top in the evening after making 1600 m that day. It is freezing up there and we decide to roll down to more pleasant temperatures. 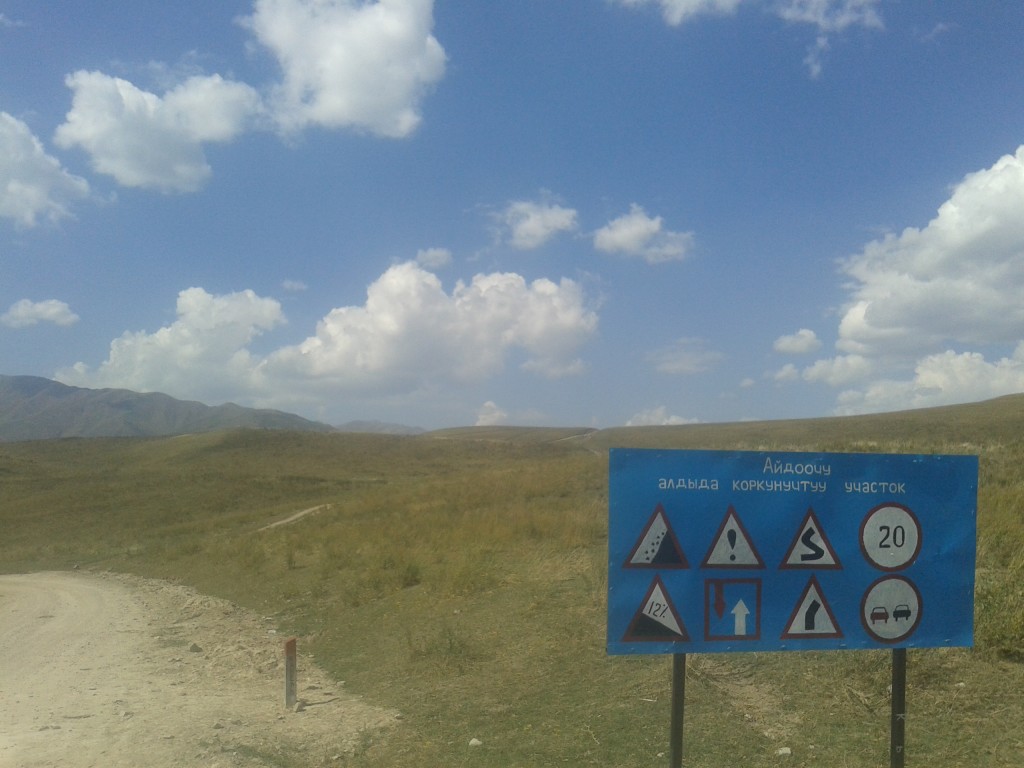 We make it to Karamalz (it is actually called Kazarman, but I constantly forget its name) where we meet Jerome again, just when we are about to leave the home stay. We met Jerome the first time in Iran, then again on the streets in Samarkand and now in Marzipan (as I said, I was unable to remember the towns name….but made progress). Small world.

We continue towards Naryn and finally reach Issyk Köl. We hitchhiked a bit, because the road was extremely bad for around 200 km. 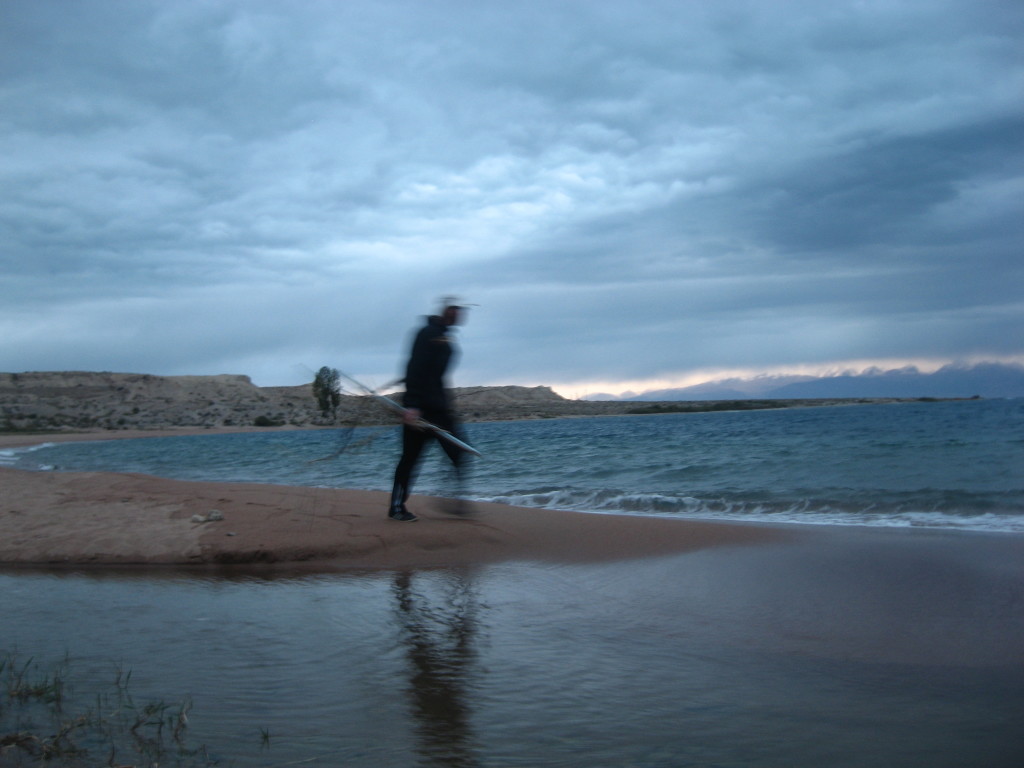 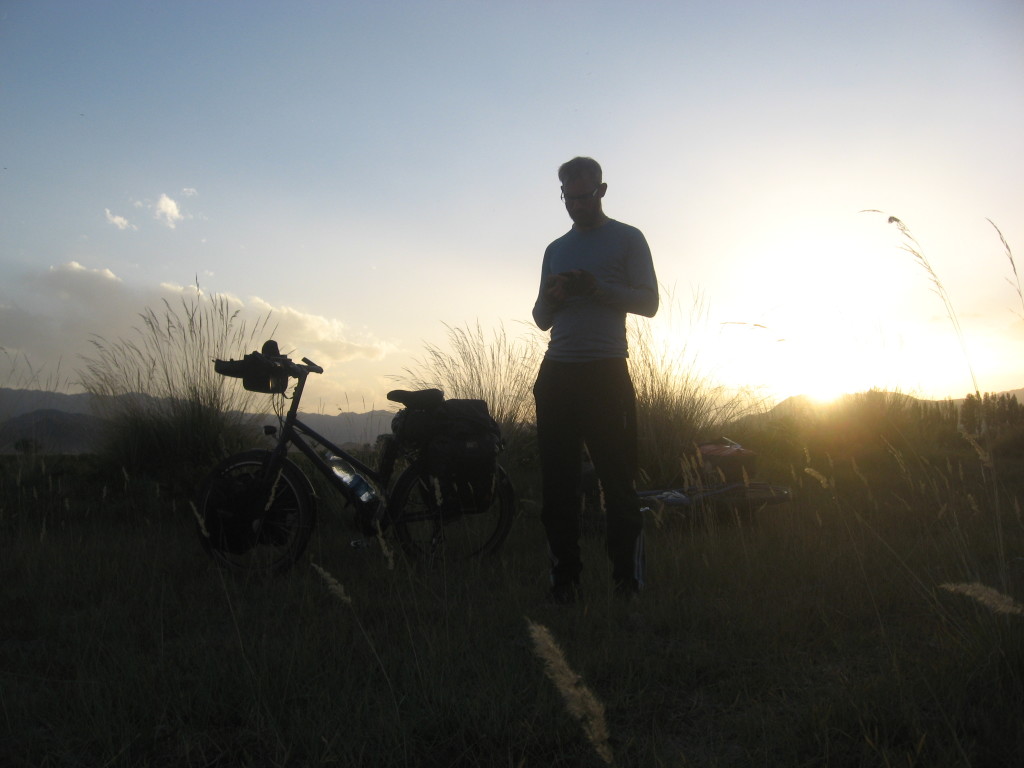 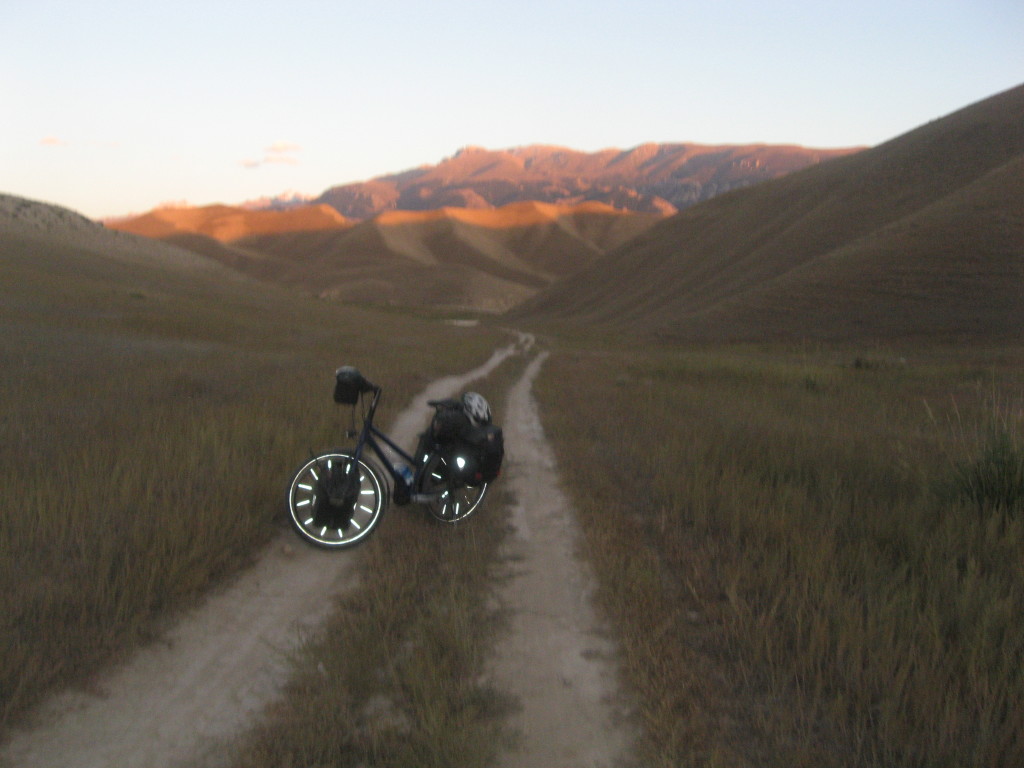 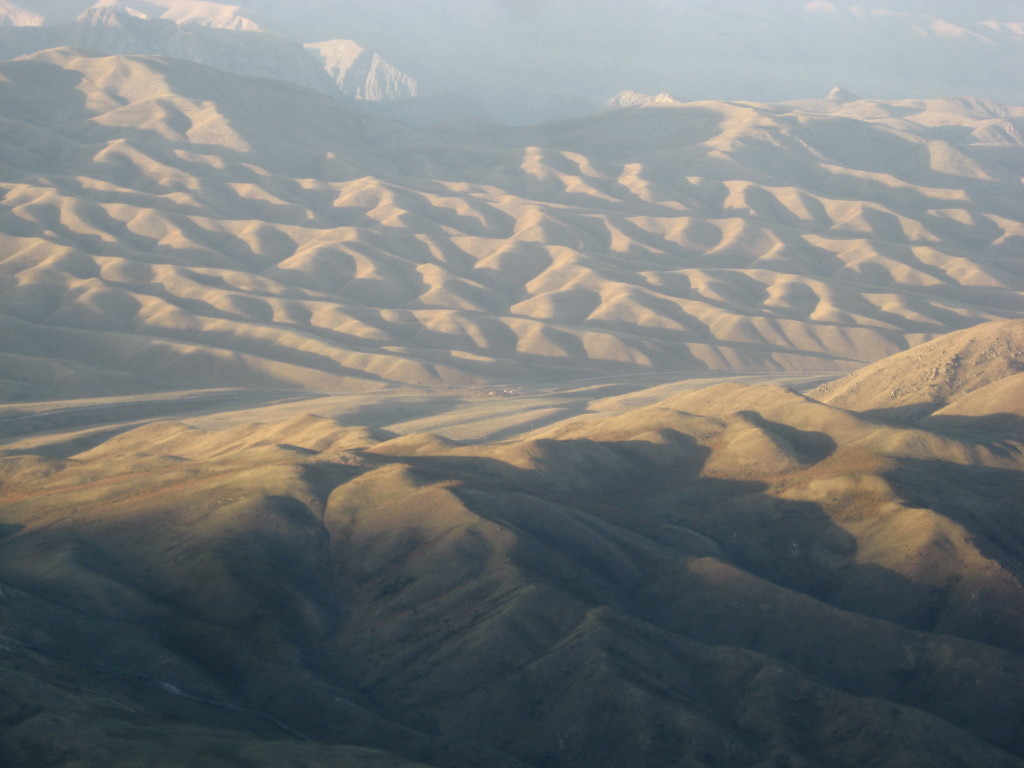 Issyk Köl means „hot lake“ in Kyrgyz, which is not really true unless you are an Eskimo. It’s true, that the lake doesn’t freeze even in the cold continental winter, but it is far from being hot. Anyway we can swim in it at least when the sun shines. But the sun is soon behind clouds most of the time. We arrive in Bokonbajevo where we want to take a horseback trip. We find an English speaking guy who offers very cheap horse trips. We give it a try. The weather is getting worse and very cold. Winter is noticeably approaching. Snow is falling in lower altitudes and almost reaches Bokonbajevo. Luckily the day we do the horse trip sun comes out again. Actually this is perfect weather. It is warm, but not hot and all the mountains around us are covered with snow. 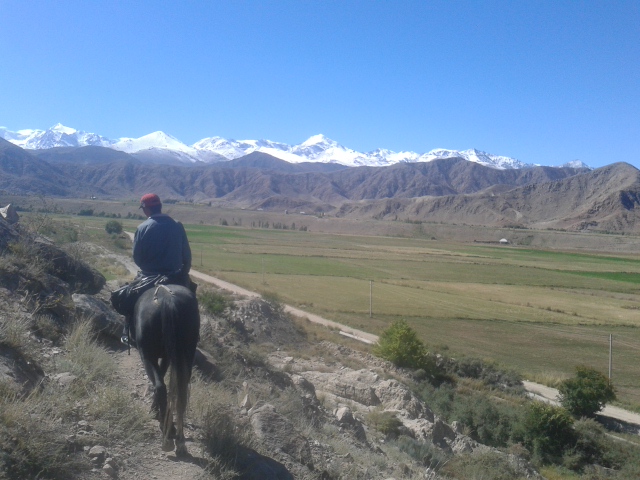 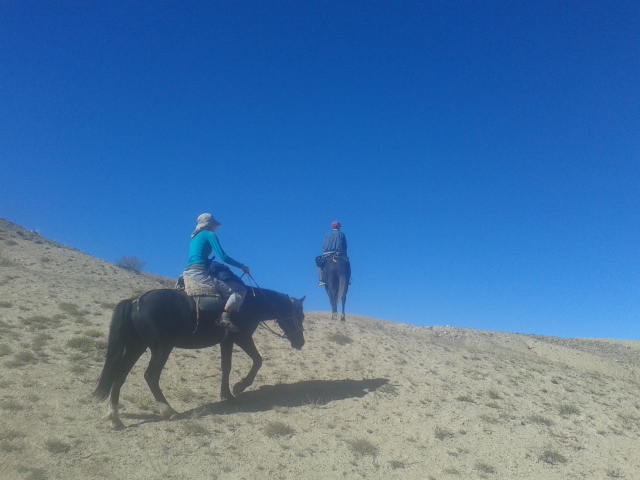 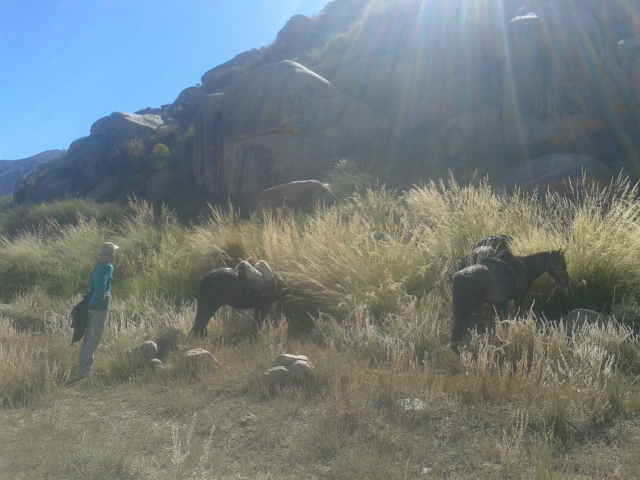 Our guide is a 16 year old guy. I think he wants to show off a bit, because we go through difficult terrain. The Kyrgyz breed horses for rough terrain, though. They slip several times between the big rocks and we have to jump over a quite deep ditch, which Cora’s horse refuses to do. After all the horses don’t seem to enjoy this at all. Even the guide’s horse refuses to move several times because it has no idea where to step. Hitting it helps. You definitely don’t want to be an animal in Central Asia, believe me.

Mine is a bit wilder and even gallops for 50 m which causes my climbing iron to tear off and I am barely able to hold on to the horse. It tears off a second time later. The leather belt is just very old. So yeah, we saved some money and are still alive. I would say my huge experience in horse riding – I once rode a pony when I was 10 – pays off. To be honest, I totally lost control. I couldn’t pull the rein any more, because I was busy holding on to something so I don’t fall off. The horse just happened to slow down because it is a lazy pig.

We both like it a lot anyway. Actually I would like to do that again for several days in a row – and maybe with new leather belts. Kyrgyzstan is just like the set of a wild west movie. Endless valleys, nobody there, extraordinary landscape and plenty of water. You could just ride a day, bind the horse to a tree, make a bonfire and continue the next day. You could actually go there buy a horse (they are cheaper than an iPhone) ride around for two weeks and sell it in Bishkek, before you take your flight back. You don’t even need a seat reservation, because I am sure you will prefer standing after that. And probably these would be the best two weeks for the horse, too. However, if you sell it in Bishkek, it will probably end up being a steak.

After the horse trekking we cycle another 60 km along Issyk Köl (it is pretty big – around 170 km long) to Karakol. Wait what? Karakol? Wasn’t that in Tadjikistan? Yes, it is actually everywhere. There is Lake Karakol in Tadjikistan with the village Karakol next to it. Then there is the village Karakol in Kyrgyzstan – twice. And according to the map, there is another Karakol in China. Seems like Karakol is the „Kirchheim“ of Central Asia. On the way to Karakol we spend another night at the beach of Issyk Köl, because it is just so beautiful and winter is chasing us, so we want to spend the last sunny days at the lake. In the distance the high mountains of the Tian Shan spread along the horizon. We can see how the snow comes closer from day to day.

We enjoy eating apples during our time at Issyk Köl. There are countless apple trees and the apples are just now ripe. Also the variety of apples is ample. You don’t get these kind of apples in any supermarket I know in Germany.

After Karakol we slowly have to say good bye to Kyrgyzstan, the only democracy in Central Asia struggling a lot with several issues. A small country in the middle of big players like Russia and China. China and the OPEC are building roads and maintain pipelines. The country once prospering in its role as a trade intermediary between China and Russia lost this option after these countries formed a trade union in 2014. Its only chance is probably tourism. But a strange feeling followed us all the time during our stay in Kyrgyzstan. As if this country doesn’t want any tourists. We couldn’t figure out why this is, but we often felt not welcomed as foreigners. We experienced this also in some parts of Georgia. And like in these parts of Georgia also in Kyrgyzstan the alcohol consumption is high and people are trying to rip off tourists. My personal guess – which maybe also applies for Georgia – is their traditions and strong national pride. After it has been suppressed by the Soviets, they don’t want it to be taken away again by tourists – after only 25 years of independence.

The last two days we cycle through a beautiful valley, finally reaching the Kyrgyz/Kazakh border post in the middle of nowhere. The Kazakh border dude has a similar attitude as the Turkmen dudes, but after he has shown that he is a really frightening bad-ass, he grabs Cora’s hand and with a desperate voice whispers: „Холодно“. („It’s cold“)

We are in Kazakhstan and winter has arrived.