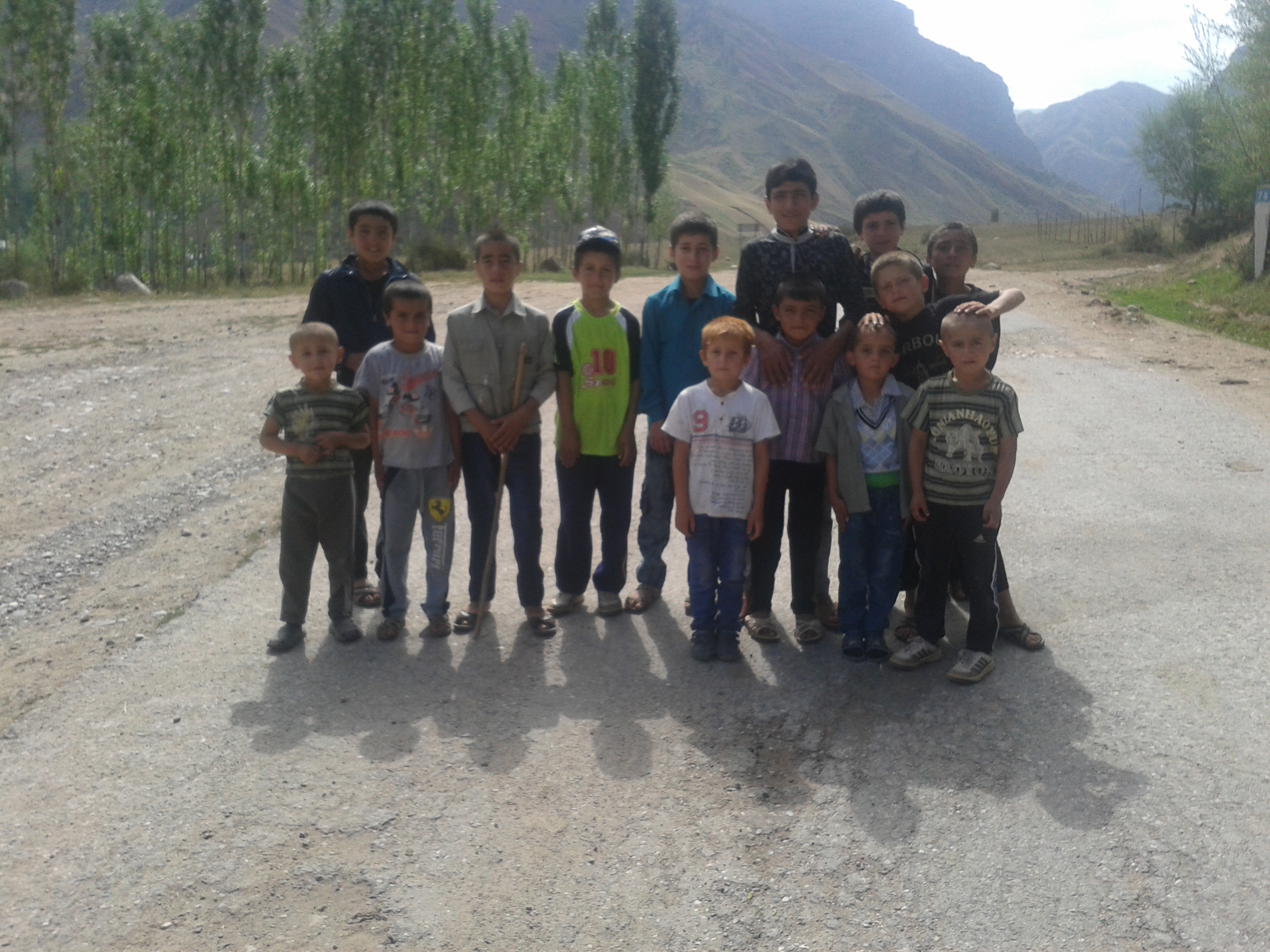 We leave Dushanbe on road M41, the famous Pamir highway. Soon two roads diverge in a yellow wood, and sorry we can not travel both and be two travelers, long we stood and looked down one as far as we could to where it bent in the undergrowth; then took the other, as just as fair and having perhaps the better claim, because it was paved and wanted wear; though as for that the passing there had worn them really about the same, and both that morning equally lay in asphalt no truck has damaged yet. Oh, we keep the first for another day! Yet knowing how way leads on to way, we doubt if we should ever come back. We shall be telling this with a sigh somewhere ages and ages hence: Two roads diverged in a wood, and I -uhm – we took the one less traveled by, and that has made all the difference. (~ Robert Frost) 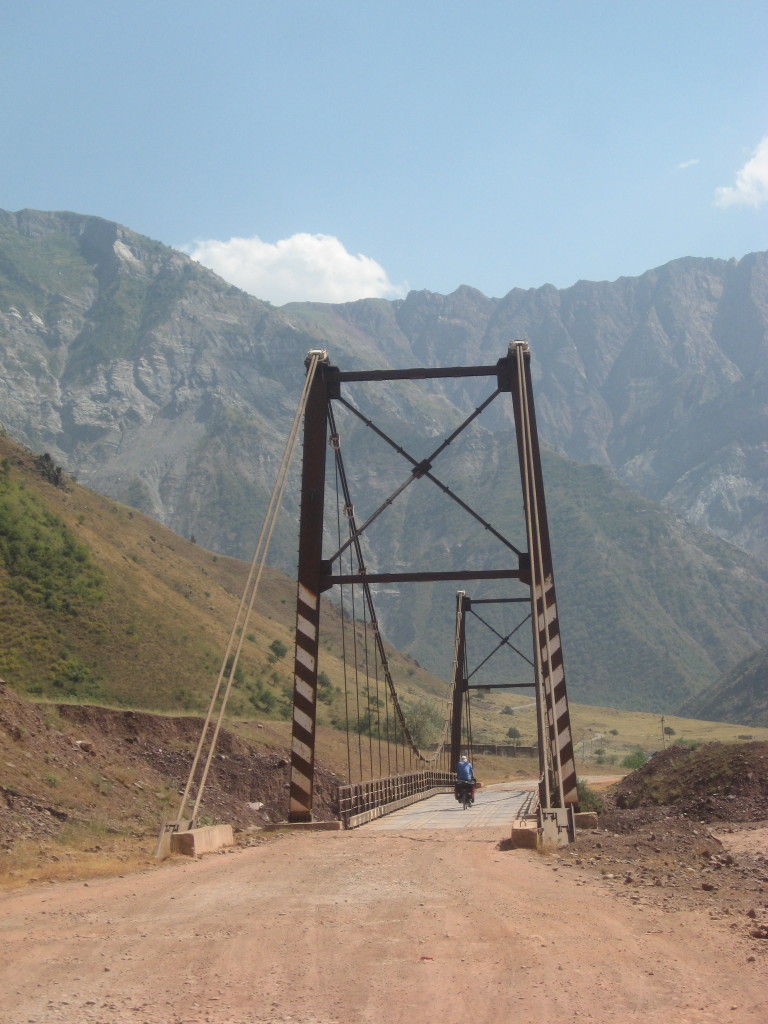 A wild and muddy river is soon following us along the way towards the 3252m high Sagirdasht pass. Most cars take the southern route to Qualai Khum. After two days we pass the first checkpoint and enter the Gorno Badakhshan Autonomous Oblast (GBAO), an autonomous region of Tadjikistan for which a special permit is required. The paved road is gone. We enter a dirt road, still called highway. 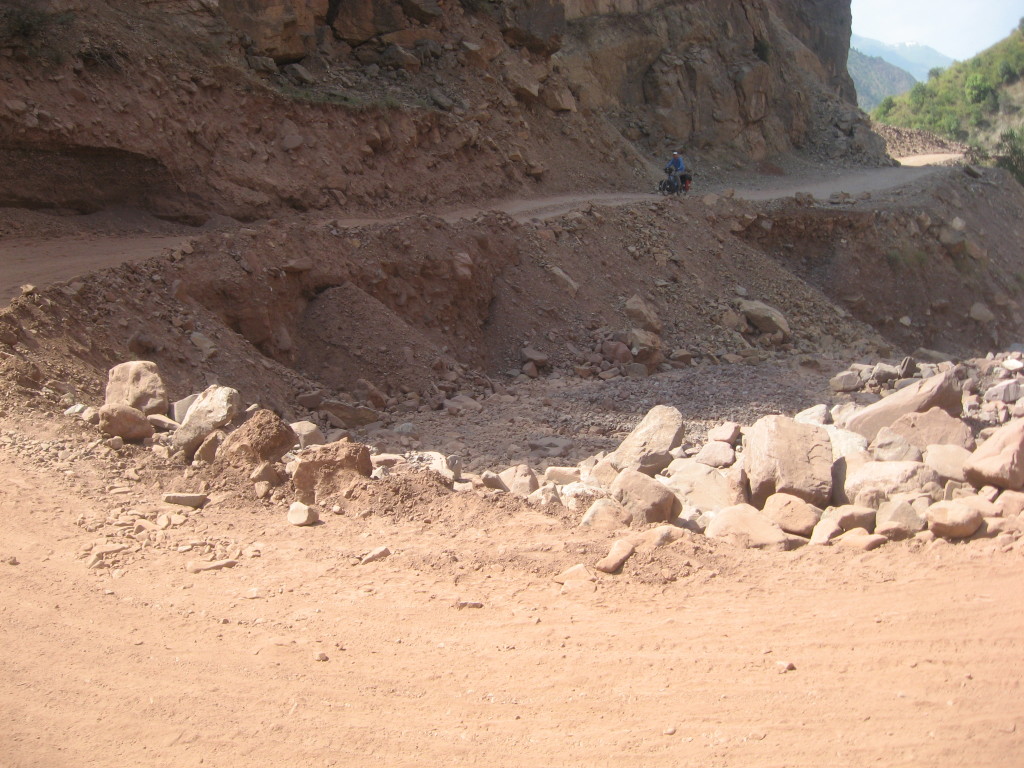 We wanted to reach Khorogh within five or six days. Soon we realize that it will take us much longer. We move through little villages and unlike in Iran, where people wanted to take pictures of us, we are now often asked to take pictures of them. Especially the kids run onto the street for a photo shooting. Actually it is the same situation in every village: We slowly enter it on a very bad road. Suddenly a child’s voice is shouting „Hello!“. Then like a chain reaction other voices shout „Hello! Hello! Hello!“, even before the kids have actually spotted us. Soon children run towards us and surround us. They look strangely european, some with red or blonde hair and blue eyes. That surprises us a lot after the very Asian looking faces of Uzbekistan. 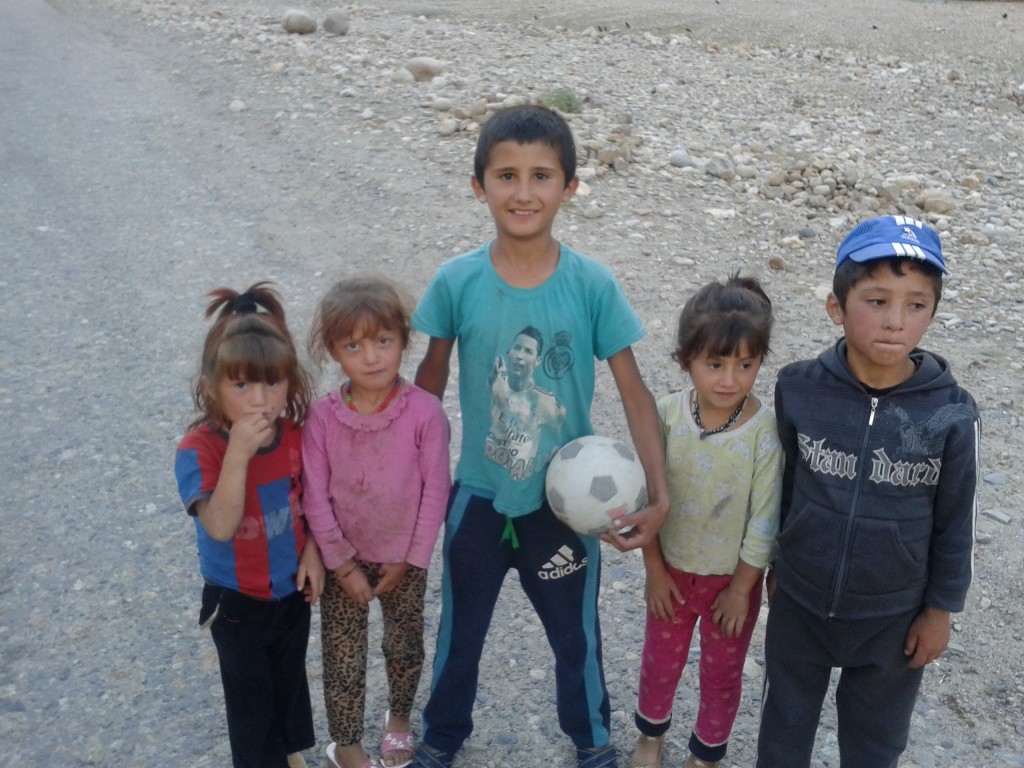 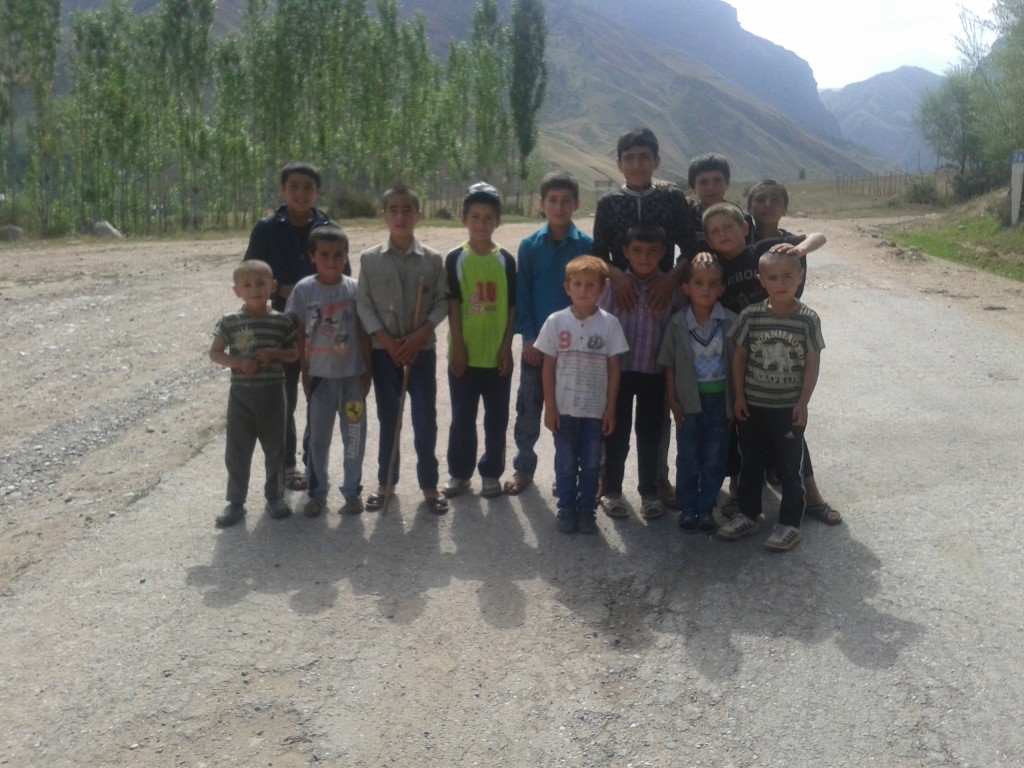 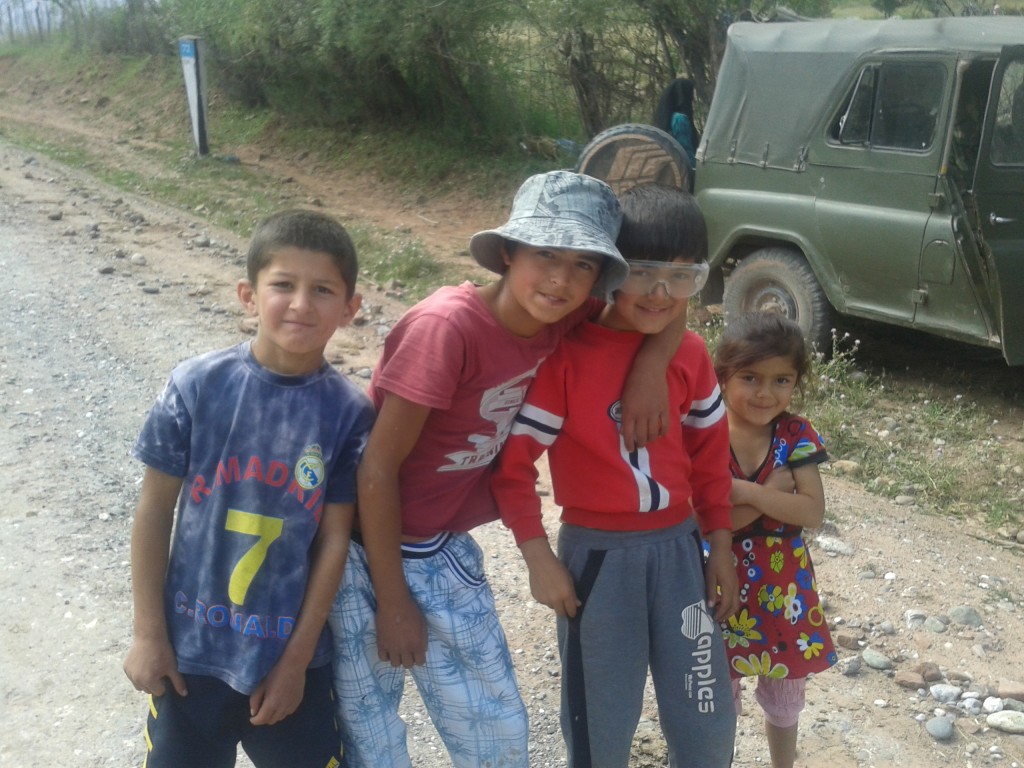 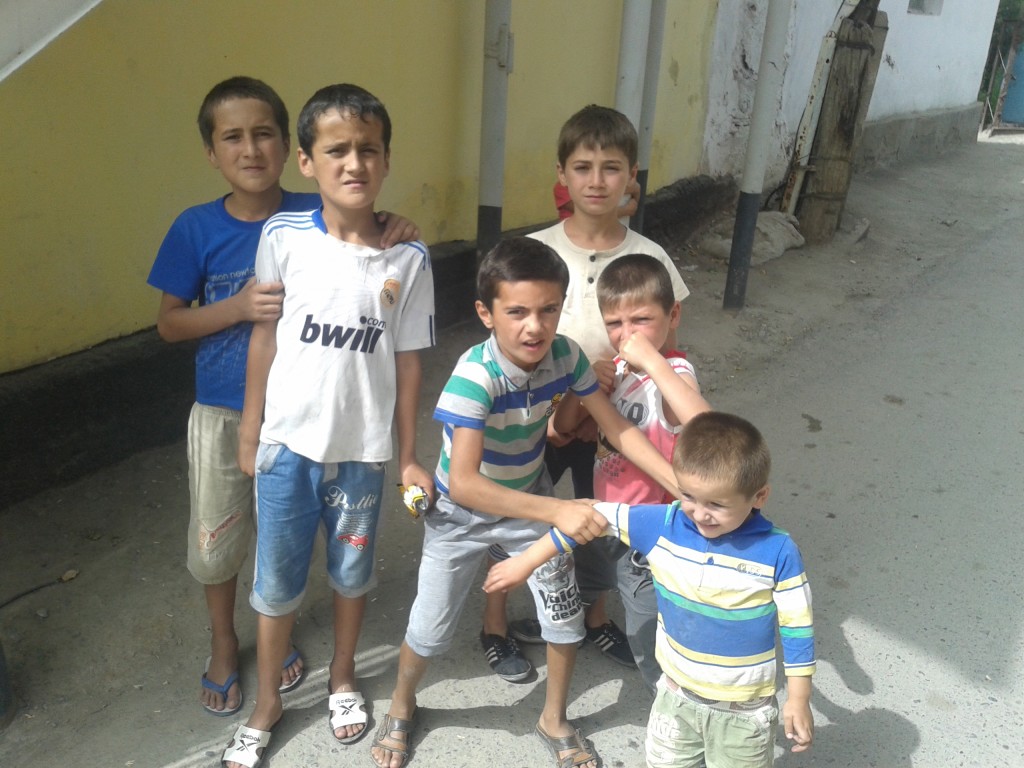 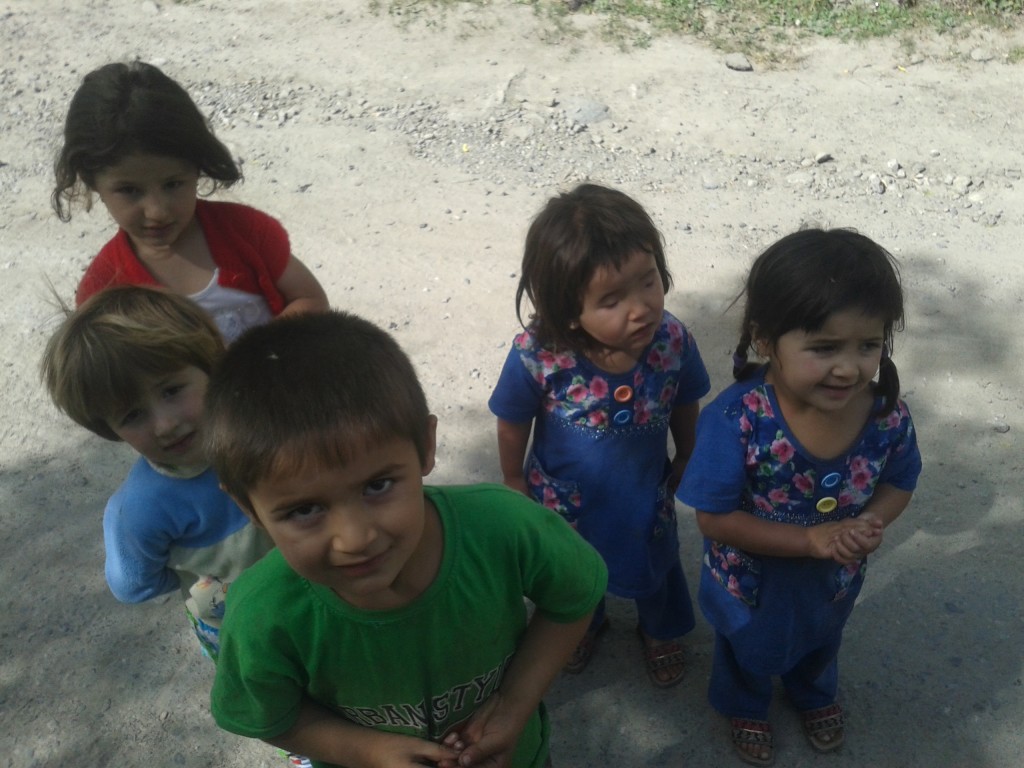 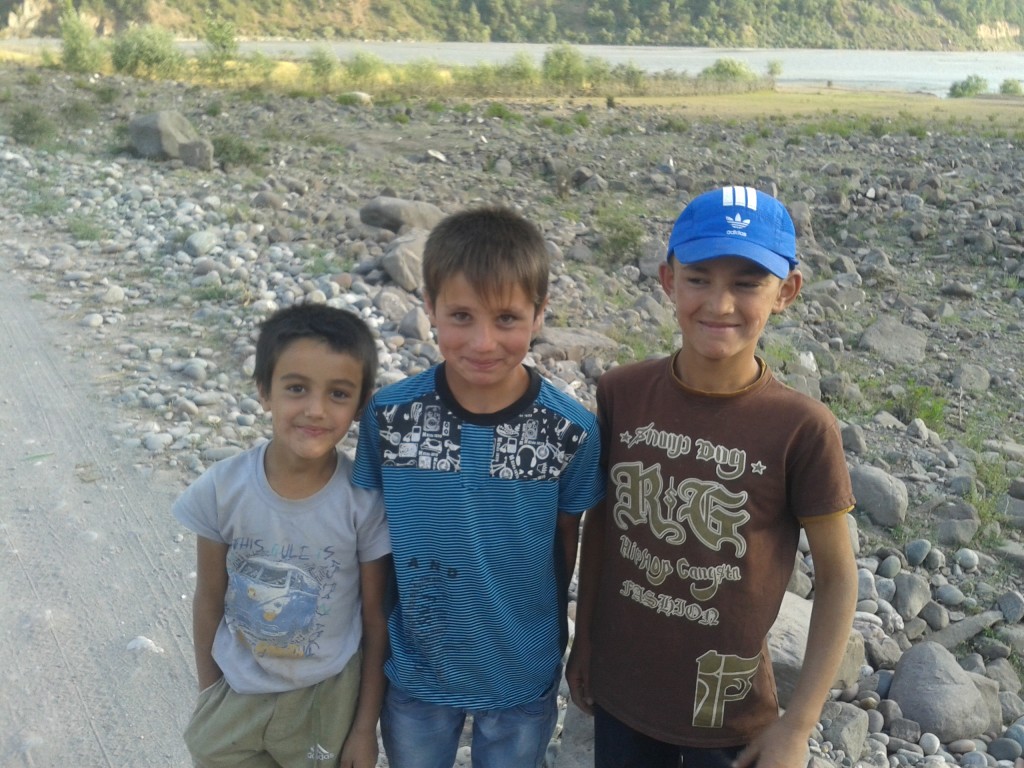 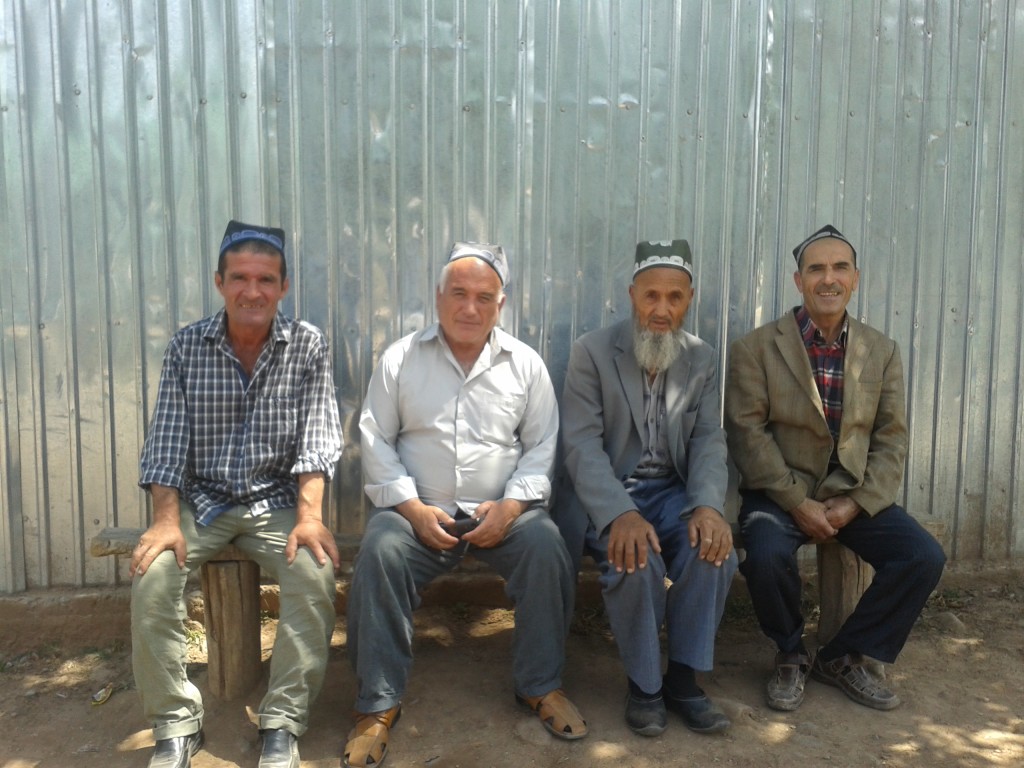 I couldn’t find an explanation for these European faces of the children, so I just made one up myself: Almost in every village there is a sign: Swiss Eidgenossenschaft helping to build a debris flow channel. French foundation helping to build a health center. German foundation of course doing what they do best: Uferstabilisierung! (riverbank stabilization). Now in my opinion they maybe also left some other traces. But that’s just a guess.

We manage the Sagirdasht pass in one day. After climbing 1660m we pitch the tent on the very top of the pass at 3252m. We want to get used to the altitude and get a feeling for the temperatures in the mountains.

The next day we roll down to Qualai Khum, a small town directly at the Tadjik-Afghan border. Only the muddy river Panj is between us and Afghanistan. For the next days up to Khorogh we follow the river and cycle along the border. On the other side some Afghan children are swimming in the river. There is also a track on the Afghan side, where we often see some locals walking from one village to another. They wave at us when they see us. This remote strip of Afghanistan only some 100m wide between the river and the high mountains stayed calm even during the civil war and also now is considered safe. Indeed it looks peaceful. 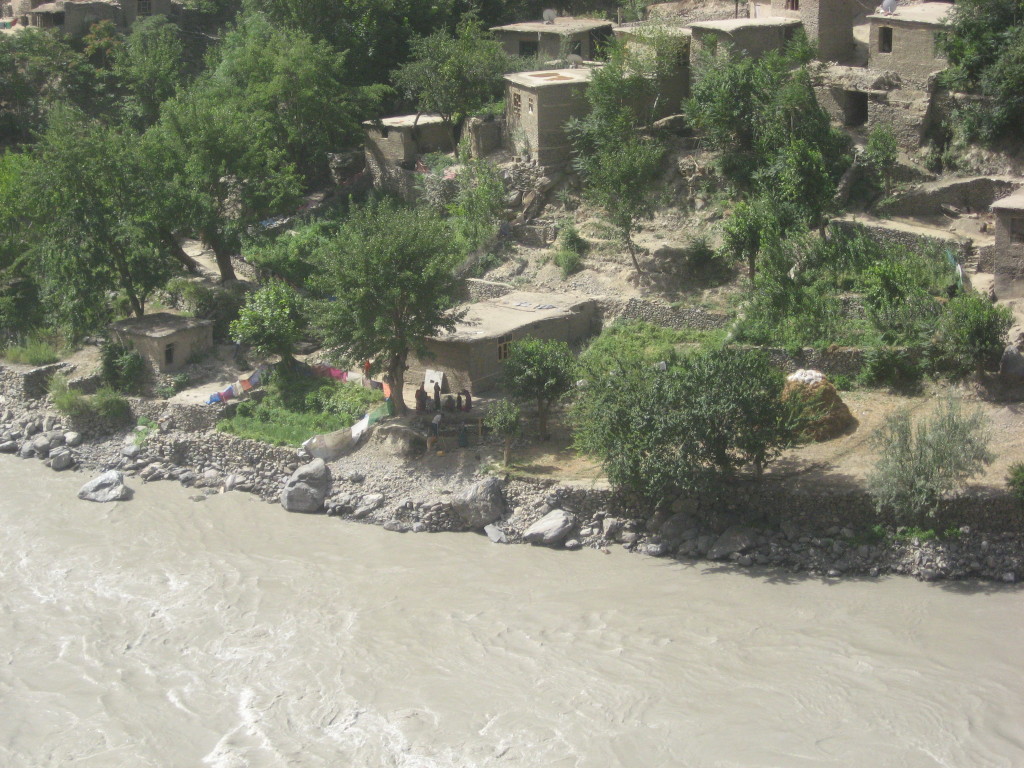 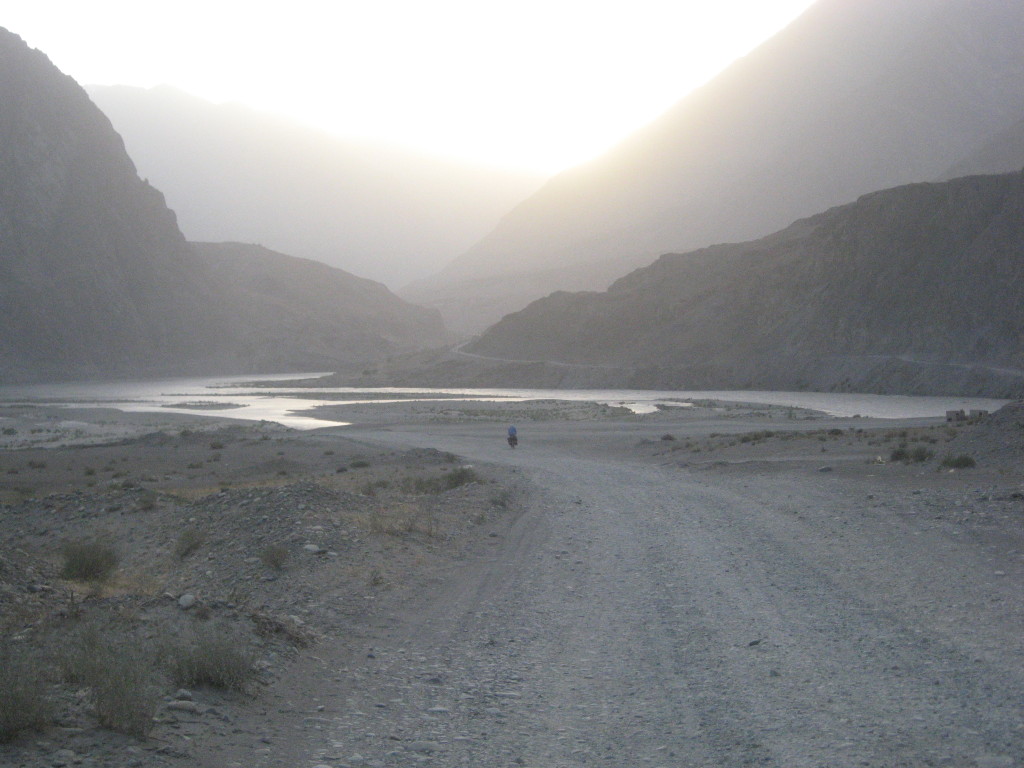 Instead of 5 days, it takes us 9 days to reach Khorogh.
After Khorogh a huge mud slide has blocked the Pamir highway. So we need to take the route south of Khorogh via Ishkashim and through the Wakhan Valley. This route however is longer and we heard the road conditions are very bad. We therefore decide to take two days of rest in Khorogh, so we only have 18 days left on the visa. We are not sure if this is enough, since we have both no experience with high altitude. Also the weather is unpredictable and we are both slightly sick again.
That’s why we want to extend the visa in Khorogh. After cycling to the OVIR office and back to another office several times, a dude with star duderinos on his shoulders asks if there is a problem. I explain the situation. He says he wants to help. Then he points at his friend and says: Big guy!
In fact according to his BMI this guy doesn’t seem to be a combat ready soldier. And I’m standing in awe when I see three golden star-shaped duderinos on his shoulder. I combine: This guy must be a general.
Our problem should be solved. The extension seems to be only a matter of dudes and hours. Unfortunately not. This time we fail. We don’t get the extension. But we get further information about road conditions in the tourist office. The lady there says we should be able to make it to Kyrgyzstan via the Wakhan Valley within a maximum of 14 days. Well then, let’s do it!