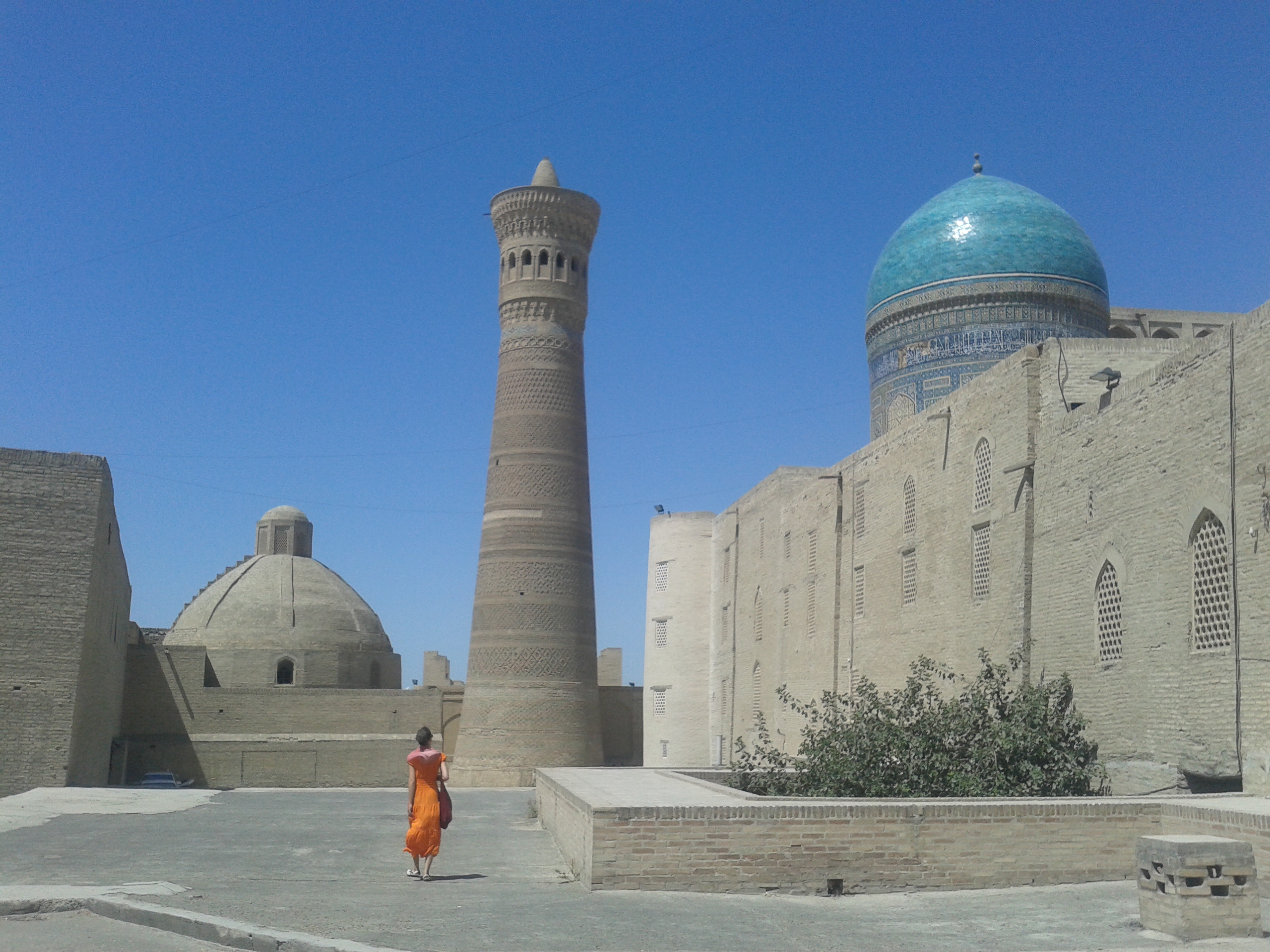 We had left Turkmenistan, but not without being interviewed about why we stayed two nights in Dashoguz. Only after I showed pictures of Cora getting an infusion, they eventually let us go.

Cora is still weak, so we take a taxi to Khiva, where we want to stay for a few days until we both feel strong enough to continue.

I haven’t shaved till Sofia so it was time for me to go to the barber shop.

What you see on the image above, however, is the end result. The barber, knowing that I am German, showed some humor and first gave me a very „classic“ German haircut and mustache, that was especially en vogue during the 1940s. I won’t put an image of this on the internet, though. Halfway through cutting my hair he pulls out his smartphone and shows me a video. Oh man, please, no! Apparently he is not only cutting hair. The video shows his nephew’s circumcision. He proudly says: „Look, he is not crying!“. Yeah, right! I hope he has more than one scissors.

Unfortunately there is no ATM in Khiva, so we move on already after two days, because we cannot afford to stay longer. Cora feels better and we decide to cycle to Urgenc, where we were told an ATM actually exists.

In fact, there are two ATMs hidden in the lobby of an expensive hotel. After we got the money, the receptionist smiles at us and says: „You are lucky, they filled it an hour ago“. We don’t understand what’s so special about that. Not yet.

We then head to the post office because we decided to send a package to Germany with presents we got and things we don’t need or equipment that needs to be replaced.

The Headquater
Thanks to my friends Martin and Michael! They help us with sending damaged equipment to the shops in Germany to get a refund or replacement parts. Also Martin will collect all the replacements and will then send a ¨care package¨ to Almaty, Kazachstan. That’s an amazing support for us.

But if you thought things are getting easier after Turkmenistan, you are very wrong. Luckily we meet Nadiy and Lyubov a.k.a. ¨the twins¨ in front of the post office, who speak German fluently and help us with the hotel, with changing money and – most important – with the package to Germany.

First you need to show everything you want to put in the package to the lady in the post office. Several things catch the attention of the officers. Only after talking to the chief dude we can finally put everything in.
We manage to get a cardboard box in a nearby shop, but apparently that’s not enough. The package actually needs to get sewed into linen tissue (!). Of course they don’t have linen at the post office. So the twins show us were to get it at the bazaar. Then they sew the package in. After that we have to write the address and telephone number (!) of Michael on the package. Now the lady puts seven seals (!) on it and that’s it! With the help of two locals it still took us more than three hours.

At least I had the chance to also buy some new trousers at the bazaar. My newly purchased Mammut trekking trousers were already pretty damaged in Bulgaria and we now send them back to get a refund. The new ones I got are Chinese cotton trousers. It’s something.

Actually we want to leave Urgenc and take the bus to Bukhara that day, but now it is too late. All buses are gone. We decide to pitch the tent in a park next to the bus terminal. But what would a day in Central Asia be without some dudes? So at night two police officers approach the tent. They say something in Russian, but I can’t understand. It’s really scary, when you are in a tent in Uzbekistan at night and hear voices talking to your from outside. I look outside. I can’t see much due to the flashlight pointing at me. The ask a few things and seem to have no problem with two Europeans pitching the tent in a city park. After a while they give us their mobile phone number in case there is something wrong. Then they leave. Because after all dudes usually just want to make sure, everything is ok. If only they knew, that letting us sleep helped us so much more…

The next day we take the bus to Bukhara and spend four days in this beautiful city. 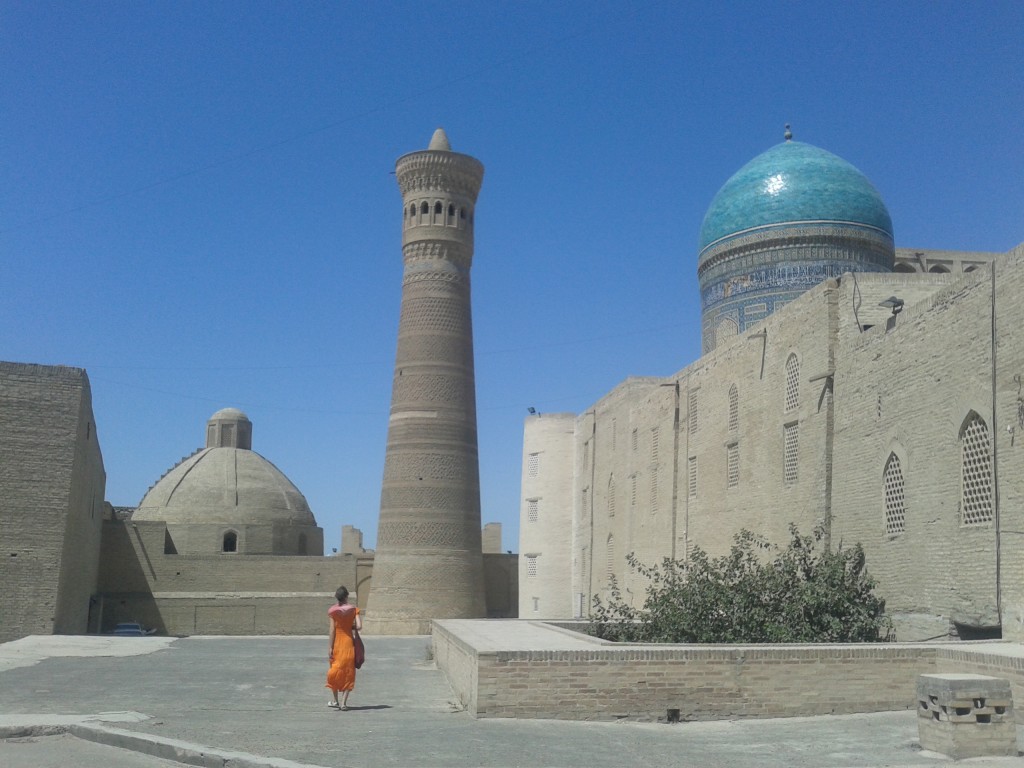 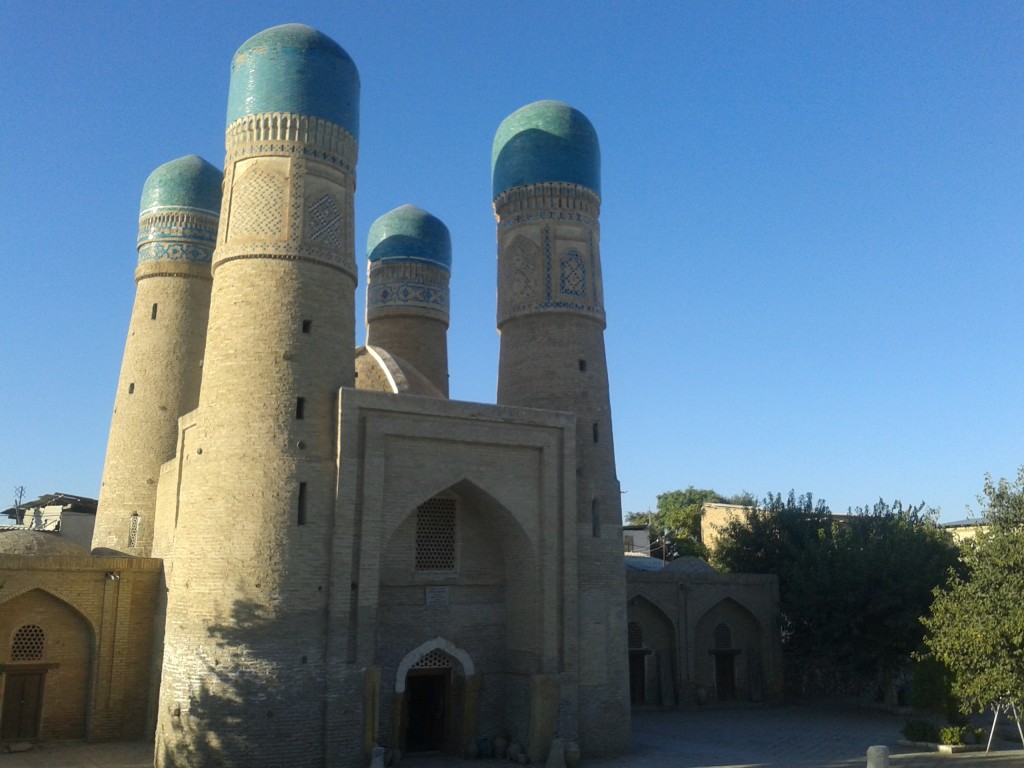 We now want to move on to Samarkand and Cora feels ok, so we try to cycle. After another night in the tent and a few more kilometers, however, we decide to hitch a ride. The wind is strong and Cora feels too weak to comfortably make it to Samarkand. Most important is that she gets well soon, so we don’t want to risk anything. The region isn’t very interesting for cycling anyway.

The border crossing from Uzbekistan to Tadjikistan directly at Samarkand is closed, so we have to go all the way south via Termiz to the border crossing near Denau. Cora is still weak and we don’t want to push too much, so we decide to take a bus to Termiz. However, there are no buses so we end up trying to hitchhike. We stand at the road for hours and nothing happens. Only after a police officer stops next to us to do some ¨traffic control¨ we have a chance to hitch a ride. Actually the police officer himself finds a car for us…and charges the driver a commission fee.

We again fit all our equipment into an unbelievably small car, which is already packed with the driver, his brother and their luggage. Then we set off towards Guzar. Cora starts to feel bad and it is getting worse from minute to minute. It turns out, the driver even drives all the way down to Termiz that day, so we take the chance, instead of risking not to find another ride the next day. After a short break in Guzar we continue.

We have to stop several times, because Cora’s condition gets worse quickly. The road is close to non-existing. It is a dirt road across a mountain. Of course no street lights, but also cars don’t have lights. It is hard to describe. A road like this would be closed in all of Europe. There are also a lot of checkpoints on the road where we have to stop and show our passport. The other passenger is an older gentleman who is concerned about Cora and so he invites us to stay at his home, where Cora can recover. We arrive in Termiz late at night and go to bed soon. We got a place to sleep at their porch. It is warm outside and a little wind pleasantly cools us down.

The next day Cora feels well enough to cycle 12km to the center of Termiz to take the bus to the border. Unfortunately only after a few kilometers she has a lot of pain again. Luckily the son of the family we stayed the last night, Micha, accompanied us and now offers we can stay another night at their place. We return to their home, then take the taxi to the hospital. Cora gets another infusion there and soon she feels better.

While Cora recovers, Micha and his friends want to show me how to tend the sheep.

At this time I don’t know yet, that the goat on the picture will be our dinner for tonight.

The next day we take the bus to Denau as planned and stay another night at a hotel there. Cora finally feels better again and we cycle to the border and cross over to Tadjikistan.

Lenny Kravitz – It ain’t over till it’s over

We didn’t cycle much in Uzbekistan, but had still a great time in the unbelievably beautiful cities of Khiva, Bukhara and Samarkand. Uzbekistan was more touristic and a lot of ancient buildings are perfectly preserved. For instance in Khiva, which is actually a big museum. We enjoyed to eat in nice restaurants and to explore the cities.

We also had a good time in Urgenc, with the twins and in Termiz with incredibly hospitable people, who didn’t hesitate to help.
Thanks to Nadiy, Lyubov, Micha and his family. You were all just great!

And after all we made it to Tadjikistan in time. Our visa allows us to stay for 30 days.