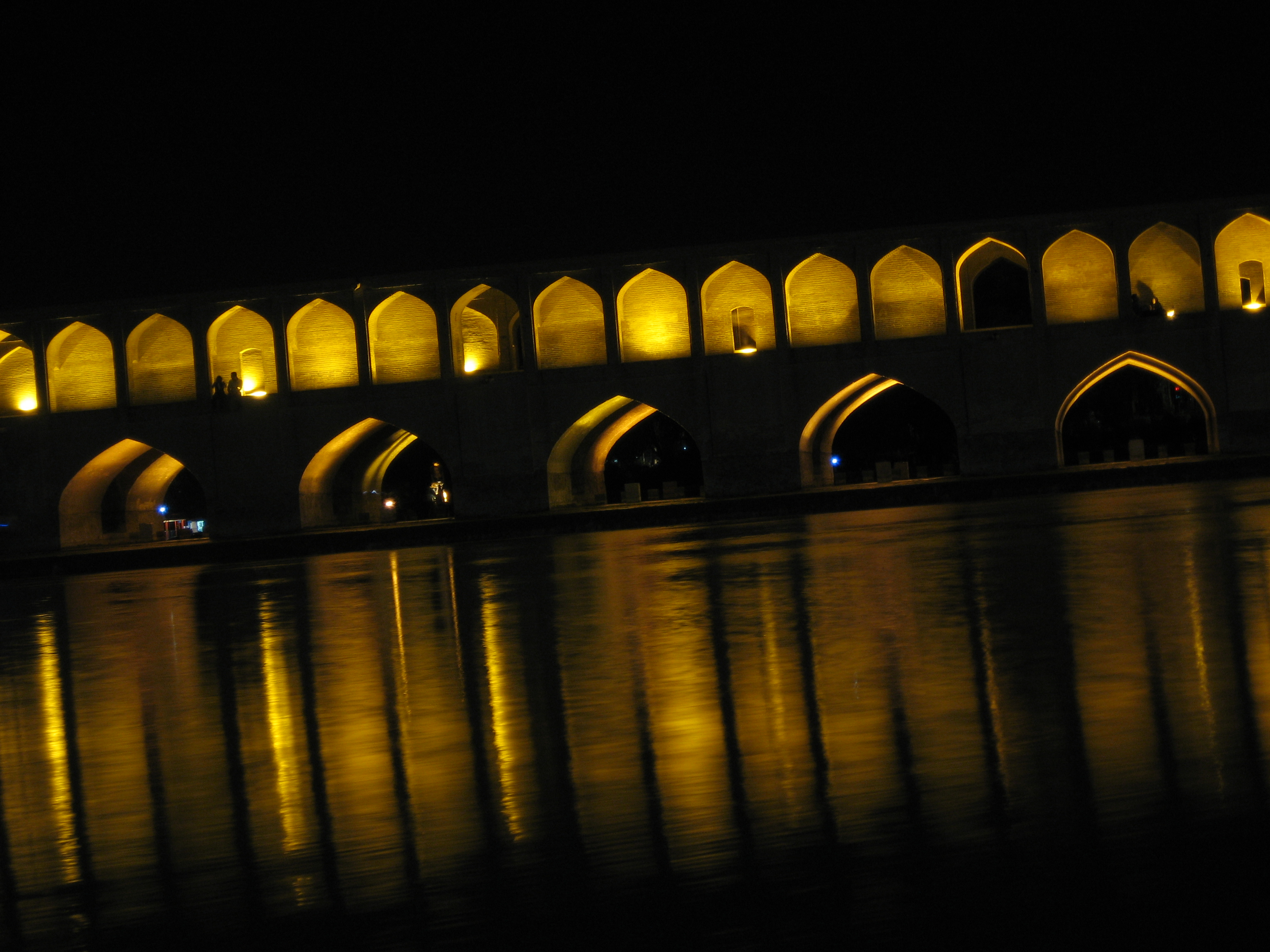 We use the waiting time to explore Iran a bit and go south. First we visit Isfahan. Faghri, a friend of Marieh and Manuchehr is our host there. She doesn’t speak a word English or German, but we feel understood and Faghri is another perfect example of Iranian hospitality. She leads us to all the sightseeing spots: The Armenian Quarter, the Shah Square, the Abassi hotel and the three bridges, which we actually like the most, especially in the evening. 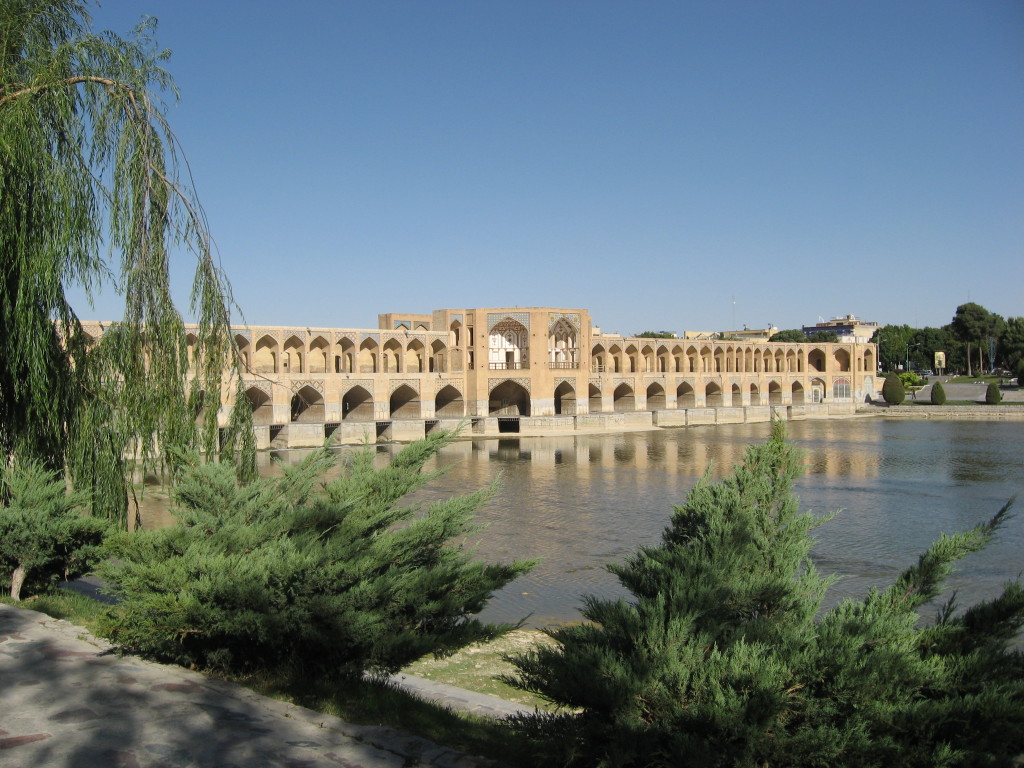 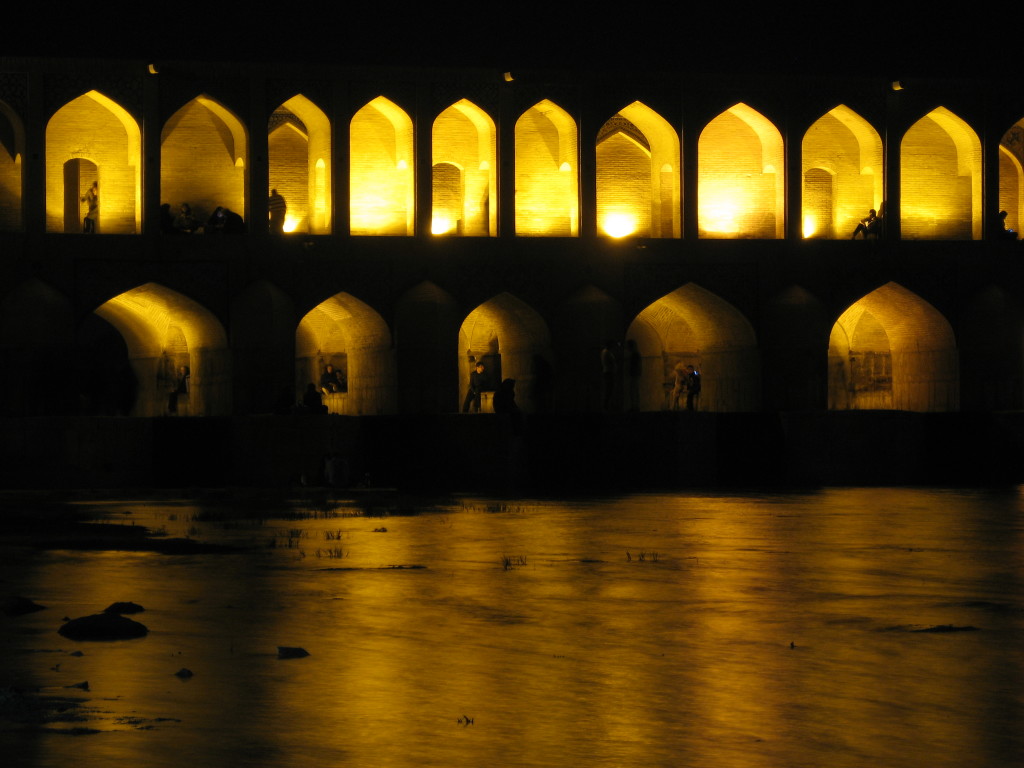 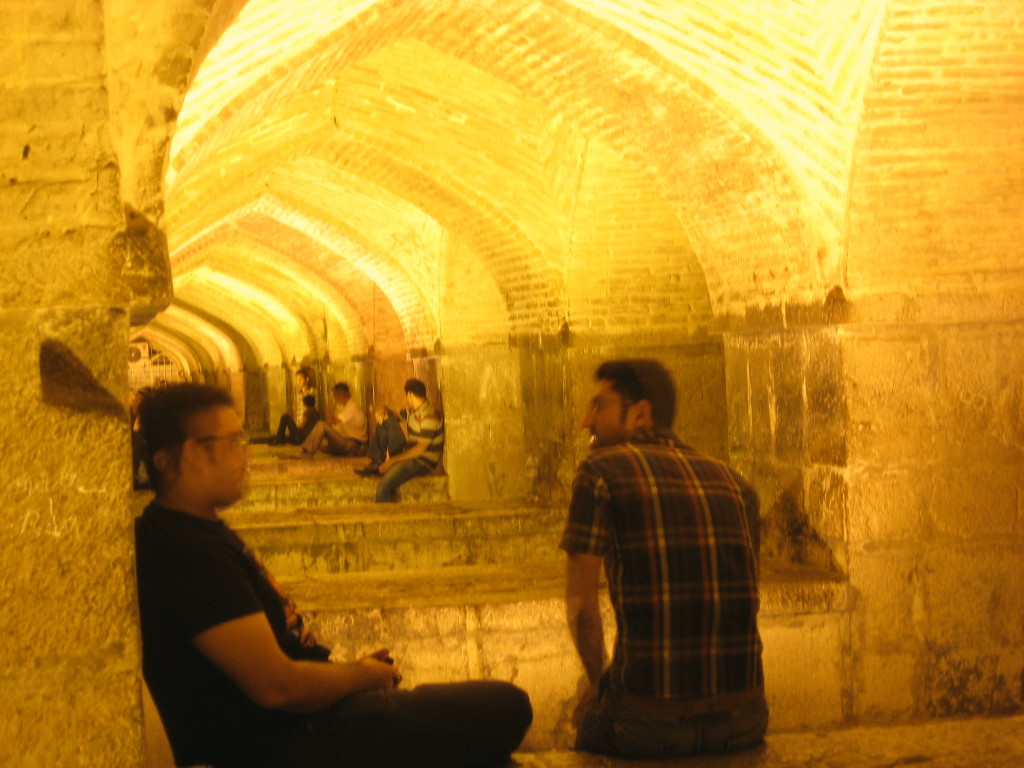 We are now normal tourists, since we left the bicycles in Tehran. It is just too hot down here to cycle and we want to continue to Yazd which is in the middle of the desert.
We always take the bus now, since they are really comfortable. If you ever go to Iran, always take the V.I.P buses. A six hour trip is no problem. You have wide seats and lots of room for your legs.

We can really relax physically, which we needed after the southern Armenian mountains. But soon the stress of a sightseeing tourist begins. Bus terminals, taxis, finding a hotel in noisy cities. Getting a tourist map, follow the map to see the tourist attractions. Really, I think we both consider this sometimes to be more exhausting than cycling all day. And of course everybody notices us as tourists and offers to change money, or stops right in front of us while we are crossing streets, just to offer us a ride somewhere with their taxi. On Bazaars several guys speaking German approach us to first tell us that they want to study in Germany. Then they push us to have tea with them. And seconds later you are in another shop selling carpets. Some of these guys just follow you for several minutes, even if you ignore them completely.

On June 18th Ramadan starts, which actually means, that you are not allowed to eat or drink from 4am to 9pm for a whole month. Luckily there is an exception for travelers and non-Muslims. Unfortunately that doesn’t help much, since all restaurants are closed. You cannot get a fruit juice at one of the countless juice bars. You cannot get a kebab or any other snack for lunch. That`s bad for us, since we cannot prepare food without our camping burner. We still don’t know how to handle this when we continue to cycle in a few days, since we really need to eat and drink when we are cycling all day.
So the restaurants are strictly closed. However it seems that not all people fast during Ramadan. We see several people drink or eat something. But we also meet a guy in the bus to Yazd who even refuses the small lunch box you get from the bus company, even though he is considered a traveler and therefore allowed to eat and drink. Actually we don’t really get the rules, because it doesn’t seem reasonable to be allowed to eat while sitting in an air conditioned bus, but not when you are paving a road in 35°C. Traveling isn’t as exhausting as it was several hundred years ago. Anyway, good for us.

Hot sun beating down
Burning my feet just walking around
Hot sun making me sweat
‚Gators getting close, hasn’t got me yet

In Yazd it is really hot. We estimate around 40°C. Our little hotel is unique, regarding all other hotels so far: All rooms face towards the backyard, where chairs and tables form something like a cafe. Since Yazd is also touristic, it is e.g. not necessary for Cora to wear her hijab inside the yard. And everybody is eating there and we get breakfast. The whole city is build like the hotel. Actually you walk through a maze, with some doors in the walls. Because all the living space is in the yards. The walls are made of a mixture of clay and hay. We like the city for its different style. And it is still inhabited even in the old town, behind these clay walls. 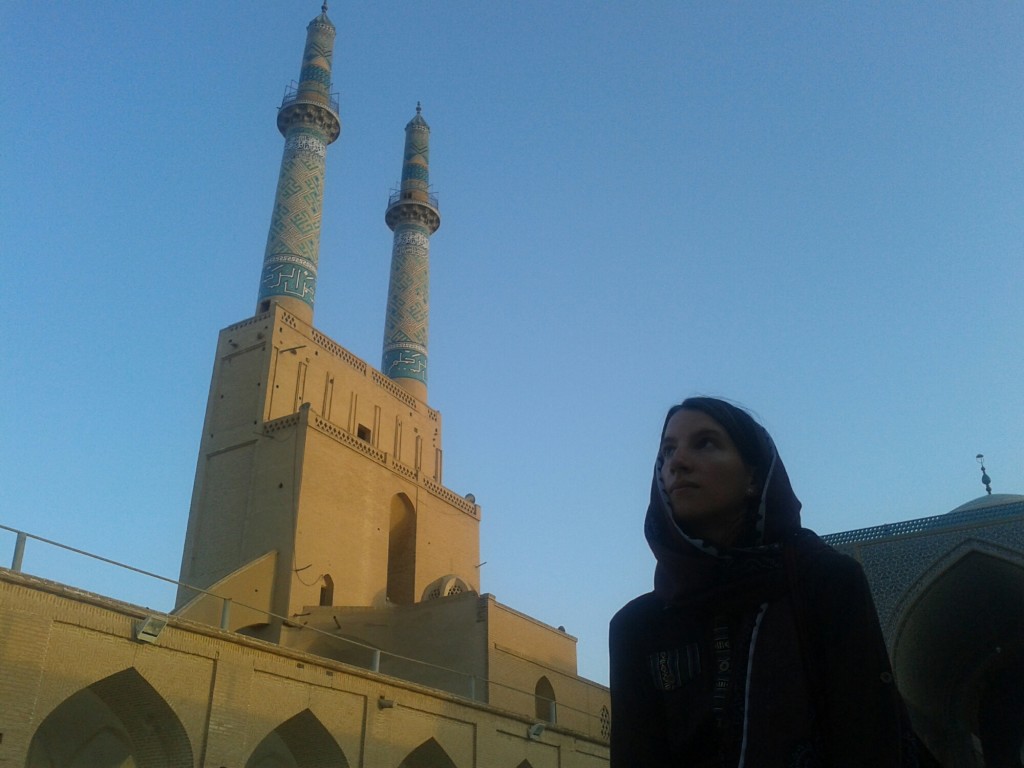 While we are taking our first walk through the city, a Pakistani approaches us and asks if we want to go together with him and some friends of him, who live in Yazd and can explain a lot. We agree. Apparently Pakistanis are equally hospitable. We spend the evening with them, because one of their friends in Yazd owns a restaurant and they wanted to know more about the cyclists from Germany. It was a funny and delicious evening.

Expert’s advice:
If a religious Muslim tells you he just got married, don`t ask him if he has children.

From Yazd we continue to Shiraz, which is the most southern place on our little sightseeing tour. Shiraz is also hot compared to Isfahan which was rather cool.

We especially like the Shrine in Shiraz. To enter it, Cora needs to wear some sort of a chador and we each get our own tourist guide who separately leads us through the men’s and women’s part of the mosque. Cora tells, that the separation seems to be also because the women go there with their babies and breast feed them. So they can easily uncover parts of their body without being seen by men, but still be around others.

The mosque itself has an amazing interior I haven’t seen in any other mosque before. The whole ceiling is covered with little silver and golden mirrors. It feels like standing in the middle of a huge crystal. Behind the mosque is a big yard, where people just wander around. It is really peaceful here, until a guy approaches me to offer a day trip to Persepolis for 50 euro. The tourist guide translates what he says. I tell them, that I don’t want to do business inside a mosque. They seem both a bit embarrassed. But actually I have been annoyed by these tourist hunters for the last couple of days already and in a sacred place, where I stick to rules to not disturb others, I see no reason to disturb me.

Of course we visit Persepolis the next day anyway. We have to ignore probably hundreds of tourist hunters to finally reach the minibus-terminal. A ticket to the last town before Persepolis is 1.20 Euro – for both of us.

Persepolis
When I was a child my parents had a big book „People who changed the world“. I remember Einstein, Ceasar, Carl the Great, Buddha and Alexander the Great. Of course Alexander the Great was portrayed as the emperor he was.
In school I was taught about the Roman and Greek empires and of course from a European perspective.

Persepolis is Greek, meaning „City of Persians“. Dareios I, Xerxes and the Artaxerxes‘ I. and II. built it to show the power and the beauty of the Persian empire. In case you didn’t know that, same here, I just read it two days ago.
Then Alexander the Great conquered the empire and probably envied them for this extraordinary example of Persian architecture and art. And that’s why Persepolis is actually a ruin. Alexander burned everything down and destroyed the buildings and statues. Then he used 3000 camels to loot the city and carry everything away.
Reminds you of recent Taliban and IS videos? Me too. Maybe Alexander wasn’t that great after all.

But he changed the world.

And now I’m sitting in our hotel room in Shiraz with the air condition blowing. They even have a TV with some Iranian channels. We wait for our bus back to Tehran which departs at 6pm and takes 12 hours. Tomorrow we will fetch the Turkmen and Tadjik visa and are then ready to jump on our bicycles again.

The TV channels show a lot of praying people in mosques. Probably because it is Ramadan. From time to time, we see these short video clips, around 2 or 3 minutes long. The same style as some similar clips from the US:
Crying children. Bleeding children. Dead children covered in dust. Some US soldiers, then smiling faces of Bush, Obama, Merkel and Netanjahu. George Bush dancing with a Saudi. Between the images, the screen fades to black and a calm voice says something in Farsi.

It is hard to understand.