OK, when we arrived in Batumi some KGB agents told me to explain my last post was purely fictional. No, there were no KGB agents. But it is so much fun to write some made up stories when there is nothing else around you except water, water and water.

Let’s see what reality has to offer…

When we leave Varna it is already dark and after some time on deck it is getting really cold and we go in our cabin. Apart from the cabin door bouncing the whole night and heavy wind blowing through the cabin window, that can’t be fully closed, we have a pleasant first night and don’t get sea sick. 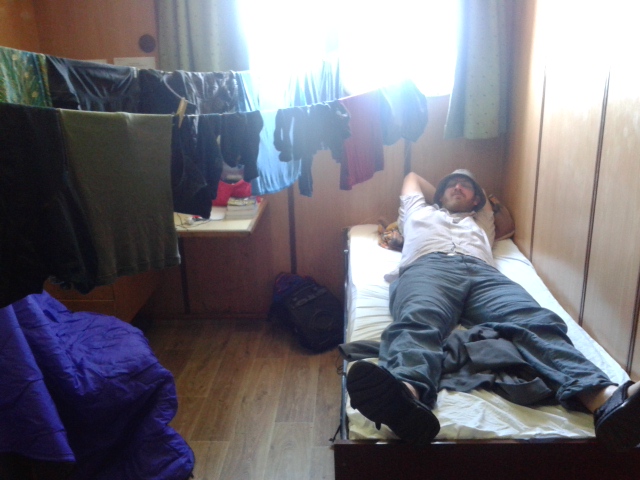 The next morning we find ourselves in the middle – or lets say in the first quarter – of the Black Sea. The ferry should actually arrive on May 9th, but is moving so slow, that more and more passengers doubt our arrival date. First they check the position of the ferry. We haven’t moved much. Then the speed. We are going 14 km per hour. And only one engine is running. Suspicious.

OK, after talking to the crew, we soon find out that we will arrive one day later, since the harbor is still occupied by another ship. The bikers on board get slightly nervous, because they only have 10 days vacation and want to do Georgia, Armenia, Turkey, Greece, Bulgaria and back to Romania.

Not much more is happening that day. We get to know the ship, the other people, have our precisely scheduled eating times and enjoy the view and the boredom, which can be quite relaxing.
In the evening we hear a rumor, that the ferry may arrive even another day later. The next day the rumor is confirmed. First, some don’t believe it, but when the ferry comes to a full halt in the middle of the Black Sea it is getting serious. A valve in one of the engines needs to be replaced. „This is scheduled“ says the captain. Sure, there is no better time and place to do that. It is a warm and cloud free day on calm water. Actually I feel the urge to jump from the ferry and swim in the Black Sea. I’m sure I’m not the only one.

The bikers soon accept their fate and already calculate how many kilometers they now have to make per day to get back to Romania in time. Good thing: Their boss is biking with them, so at least they don’t have to explain if they are two days late for work.

The Swiss children are running around deck and the freight deck gets more or less a playground for everybody. After a few days we end up throwing balls from the freight deck to deck 2 and back while the captain is watching holding his cup of coffee. Actually the whole time we are never quite sure if there is anybody on the bridge. One guy entered the restricted decks and had a look in the bridge. „Nobody there, we are going on autopilot“ he says.

The valve got replaced, the ferry moved on. Still 14km per hour. Besides the quiet noise of the engine running we hear constant screams from the freight deck. One truck driver has loaded pigs and they are screaming like hell. The last day he gets nervous because he has no more food for the pigs. As one guy askes him how many pigs he has loaded, he replies: „190“ – pause – „189“

In the early morning on May 11th Batumi rises on the horizon and we are slowly approaching the harbor. The bikers soon stand on deck in their biker outfits ready to move off the ferry and on the road again. Little do they know, that this is ferry slow and reaching the harbor does not mean leaving the ship.

We arrive at 8am but are only able to leave the ship around noon. Yeah, we are standing on solid ground again. Now lets just show our passports every 10 meters again and again and we are finally in Georgia.