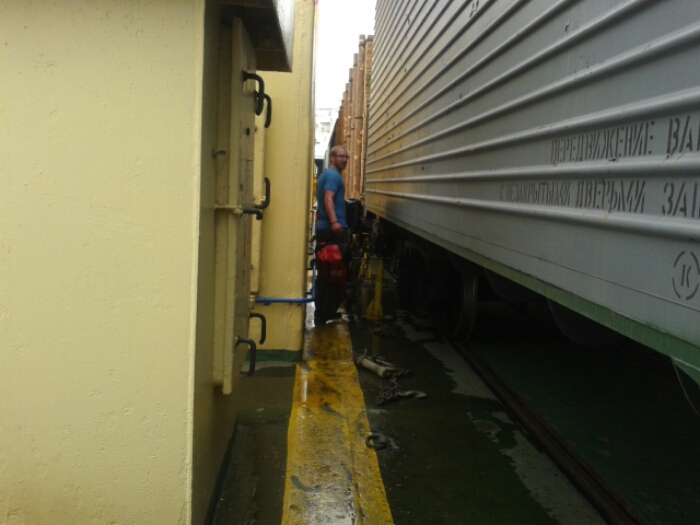 Ok, at around 1pm we finally can enter the ferry complex, but have to leave our bikes outside.

We walk a few hundred meters to a shabby and abandoned building leaning like the Pisa tower. We hear voices from the second floor and head there. The motorcyclists are already there and now we have to wait for around an hour.
While waiting we meet two swiss guys travelling in „micro buses“ (according to customs) with their wifes and three children aged 6 month to 2 years. 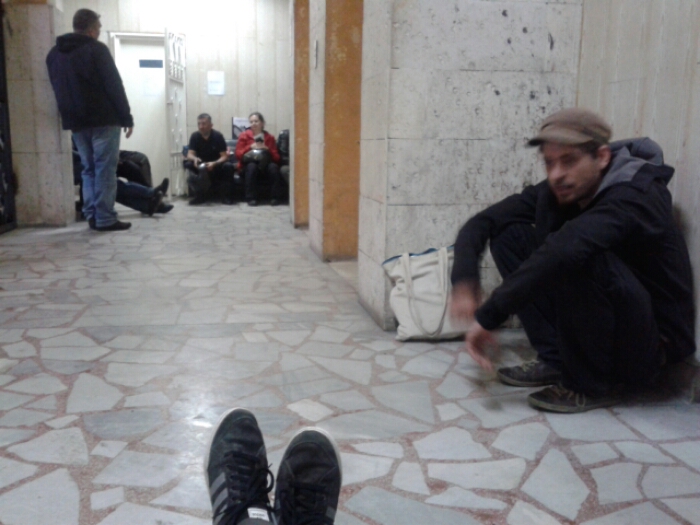 A guy comes out of the office describing the process of doing the boarding. It sounds like:

Alrighty, sounds easy. He was actually talking about a „sheet“ by the way..

We go inside the office, get our passports copied, drop our cookies all over the floor, pay the ferry tickets and leave.

OK, we go outside, left, left. An office, nobody there. We see the border police standing around somewhere, go there and show our passport and passport copies.

Officer: Have you been to customs?
We: No!
Officer: Go to customs!
We: Do we need to take the bicycles there, too?
Officer: If you want…?
We: OK, thanks

…and go to the customs.

The customs building is 100m away. Also empty. The whole building is empty. A guy with a suit stands outside. He ignored us, when we walked towards him. We ask some other guys, what we have to do. They point at the suit-guy and say: He has to give you a stamp.

We go back to the border police.

He: Have you been at the customs?
We: Yes.

He: Did you pay?
We: Yes we went to the office there (point at the ferry complex)
He: You paid?
We: Yes, we paid

I expect him to ask me now like I’m a little boy: „And you are really not lying to me?“
But he didn’t. He just said: „OK, then you can get your bikes.“ Apparently he never heard about receipts.

OK, so we cross the border very officially. And then? Then we just move outside the whole complex to get our bicycles. There is a guy at the gate and he wants to see our passports and copies again. Then we enter the ferry.

We could have just made a copy of each of our passports and move on the ferry. And man, they need to have a meeting there to optimize their business processes.

We are now on the ferry and got a two person cabin (called luxury), which we didn’t book. We booked the 4 person cabin. Well, I don’t want to insist.

The ferry mostly carries train wagons and some trucks and normal cars….and us.

It is now 3:24pm (2:24 in Germany). I think we won’t leave before evening. But we are on the ferry and the staff is very polite. We already had a look in the dining room and feel comfortable here. We have two beds arranged in a 90° angle so we can experiment a bit with the sea sickness.