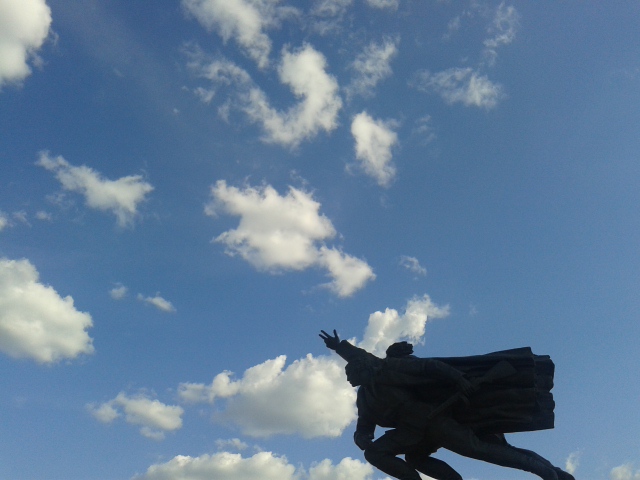 We enter Croatia from Hungary on a small bike route on top of the Danube dyke. A kilometer sign is counting down from 5 to zero, then a barrier gate with the Hungarian flag. Then 2 meters without asphalt, just gras. Then another barrier gate with the Croatian flag and the route continues.

In a way this is our first real border crossing. Nobody there though. Europe is pretty united if you ask me. We know our stay in Croatia will be very short. The bike route is only passing through it for a few kilometers. Within an hour we expect to be in Serbia. My inner voice is already writing this blog post and joking about the 5 people we saw and that we saw more sheep than people. We are almost at the Serbian border, when a statue catches our attention. We go there, but can’t really understand what it is about. Only a relief shows some soldiers and I can tell by their uniforms, that they are German soldiers from second world war.

It gets a bit late and we decide to stay at least one night in Croatia. We move down to the Danube and ask some locals for a guesthouse. The two old ladies don’t speak any English or German, but make themselves very clear when giving directions. We easily find the guesthouse in the middle of a small town called Batina.

While Cora is taking a shower I am talking to the host. The lady is speaking German quite well. I tell her we visited the statue on the hill and she explains the Russian and Yugoslavian army have defeated the Germans at this point in World War 2. The Danube was the battlefield.

Then she starts to talk about this region and how it suffered from another war. And at this point our short stay in Croatia became a very big picture:

I remember the bunkers at the Atlantic Ocean and there are movies about the D-day invasion. But this was taught us in history class. The Croatian War, however, from the early to mid 90s is something I grew up with. I saw the images flickering on our old TV when my parents watched the news. I was 10 years old when this conflict started and wasn’t much interested in politics until my mid-twenties. Now I am sitting on the porch of the guesthouse and this lady tells me she had to flee with her two small children from this town just 25 years ago and just returned in 2001. That the house we are sleeping in has been looted, bombed, destroyed and rebuilt. A lot of people did not come back ever, so many houses are still empty. For several years blue helmet soldiers were stationed here. Then within days the Croatian army took over and then, after years of war „Everything was the same. They fought for nothing.“, the lady says.

I listen carefully, because I really didn’t know that we are in this particular region, East Slawonia, which was actually the main battle ground in the Serbo-Croatian war. It is even harder to comprehend since you now can cycle along the Danube and cross the border twice a day because it is meandering across the Danube all the time. If you see how little populated this area is, you can only imagine the propaganda that took place and how the media coverage heated everything up. Because you know, I wanted to write about the sheep and the 5 people we met.

So that’s the big picture and you cannot upload it.